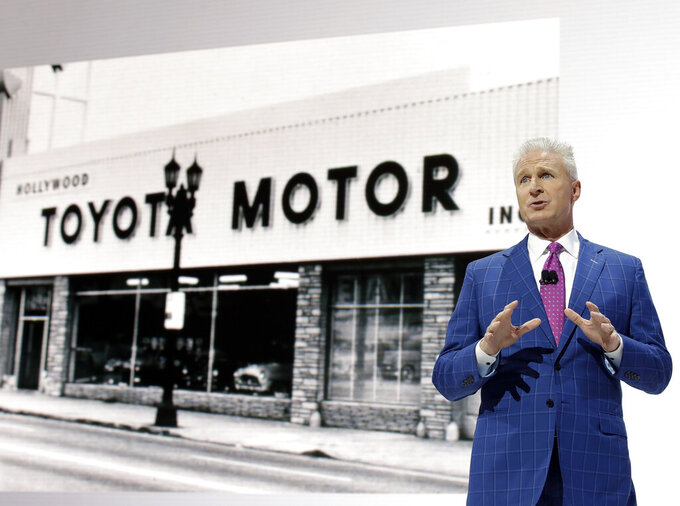 FILE - In this Nov. 20, 2019, file photo, Jack Hollis, Jack Hollis, group vice president and general manager of the Toyota Division at Toyota Motor North America (TMNA), speaks at the AutoMobility LA auto show in Los Angeles. Toyota's new Sienna minivan and a revived Venza midsize SUV were supposed to be unveiled at the New York International Auto Show in April 2020, but the show was postponed until late August due to the novel coronavirus. That would have been too close to when Toyota's vehicles would reach showrooms, so the company decided to go on its own and showed them online. (AP Photo/Marcio Jose Sanchez, File)

DETROIT (AP) — When Toyota introduced two new vehicles Monday, its executives didn't brag about them from an elaborate stage inside a convention center.

Instead, the new Sienna minivan and a revived Venza midsize SUV were shown online from the company's nearly deserted U.S. headquarters and from the driveway of an executive's home.

Both were supposed to be unveiled at the New York International Auto Show in April, but the show was postponed until late August due to the novel coronavirus. That would have been too close to when Toyota's vehicles would reach showrooms, so the company decided to go on its own.

The move may be a sign of things to come for New York and other shows. Some automakers already were starting to pull out of auto shows, citing costs and the ability to do events on their own. That left fewer models for consumers to browse at the shows.

Now doing it online could be a viable solution, possibly causing more automakers to leave the shows.

In addition to Toyota, Nissan is planning to show an updated Rogue crossover SUV, its top-selling model, at a virtual event in June. Ford has delayed the debuts of a new F-150 pickup and Bronco SUV, while General Motors held off on unveiling a new battery powered Cadillac SUV. Those, too, could be done online, although no one is sure if the virus will start a trend.

“I don't know if unveiling an all-new model from my house is getting back to a new normal, but let's see how it goes,” Jack Hollis, head of the Toyota division in North America, said while showing off the Venza from his driveway.

Yet even if there aren't as many models, attendance by consumers is holding up at most shows.

“What is often forgotten is that after press days are over, hundreds of thousands of people go to auto shows,” said Dan Bedore, who helped plan auto shows when he worked for Ford, Hyundai and Nissan and now works for a public relations agency.

Mark Schienberg, president of the New York International Auto Show, notes that even though German luxury automakers Mercedes and BMW and Audi pulled out of this year's New York's show, the number of model debuts at the show has remained consistent at more than 50.

The New York show, which Schienberg says consistently draws over 1 million people per year, will remain popular for both consumers and media, letting automakers get their message to the world.

“It's about the consumer. It's about getting them excited about the vehicles. Seeing all the cars under one roof. That’s what makes auto shows unique,” Schienberg said.

The auto show in Geneva was the first to outright cancel its event, which had been scheduled in early March when the coronavirus was spreading to more countries. Organizers of Detroit’s big auto show were also forced to cancel their June event.

The Detroit show had a strong lineup of debuts this year and is expected to next year “despite whatever trends you are seeing or watching,” said spokesman Brent Snavely.

“Things are so fluid right now,” said Curt McAllister, a Toyota spokesman. “You have to use technology to its full advantage at this point in time.”

Both new Toyota vehicles will only be offered in gas-electric hybrid versions. The Sienna will get an estimated 33 mpg in combined city-highway driving, while the Venza is expected to get around 40. Both will have Toyota’s electronic safety suite, including automatic emergency braking, as standard equipment.

The Venza goes on sale this summer while the Sienna reaches dealerships late this year. Prices weren’t announced.