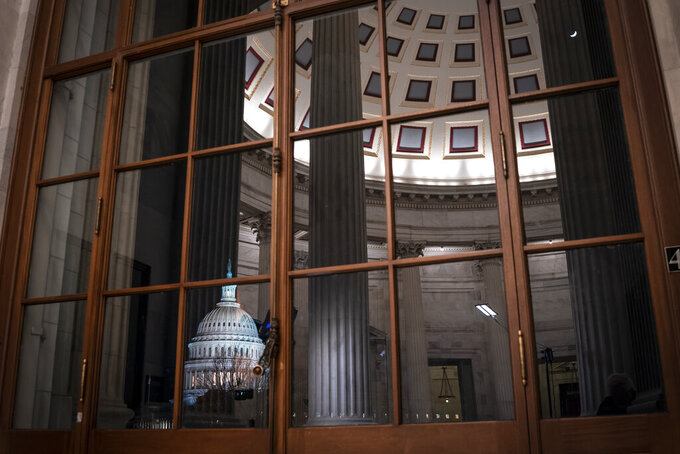 FILE - In this Jan. 29, 2020, file photo the Capitol is seen amid reflections of the Russell Senate Office Building in Washington. The Treasury Department said Wednesday, April 14, 2021, it has created a new office to supervise the disbursement of the billions of dollars in relief money passed by Congress to combat the coronavirus-related recession. Officials said the goal is to streamline the process and ensure that all eligible groups have access to the aid. (AP Photo/J. Scott Applewhite, File)

WASHINGTON (AP) — The Treasury Department has created a new office to supervise the disbursement of the billions of dollars in relief money authorized by Congress to combat the coronavirus-related recession.

Officials said Wednesday that the goal is to streamline the process and ensure all eligible groups have access to the aid.

The Office of Recovery Programs will oversee the release of $420 billion in support from the $1.9 trillion package that President Joe Biden pushed through Congress last month, the Treasury said. That package included payments of up to $1,400 for individuals, extended emergency unemployment benefits, rental assistance, support for small businesses and state and local governments.

The new office will also be responsible for supervising programs under the control of Treasury that were approved by Congress last year. In all, Congress has approved around $5 trillion in assistance to help millions of people who lost their jobs, and also businesses that were forced to close due to the pandemic.

Deputy Treasury Secretary Wally Adeyemo said the goal of the new office was to “get relief distributed quickly and into the hands of those who need it most.“

In a separate report Wednesday, Treasury said that another 2 million relief payments with a value of more than $3.4 billion have been disbursed over the past week.

That brings the total payments made since March 12 to 159 million with a value of more than $376 billion. These individual payments total up to $1,400 per person, with the large bulk of the money coming in the form of direct bank deposits made by the IRS.

The new Treasury office will be led by Jacob Leibenluft, who was designated as Treasury’s chief recovery officer. He will work closely with Gene Sperling, named by Biden as White House coordinator for the government’s rescue efforts.

Treasury officials said the new office will oversee a number of relief programs dealing with such areas as state and local government support, emergency rental assistance, support for homeowners to meet mortgage payments, support for small businesses and loans for airlines and national security industries.