For Trevor Noah, Grammy Awards a return to in-person hosting 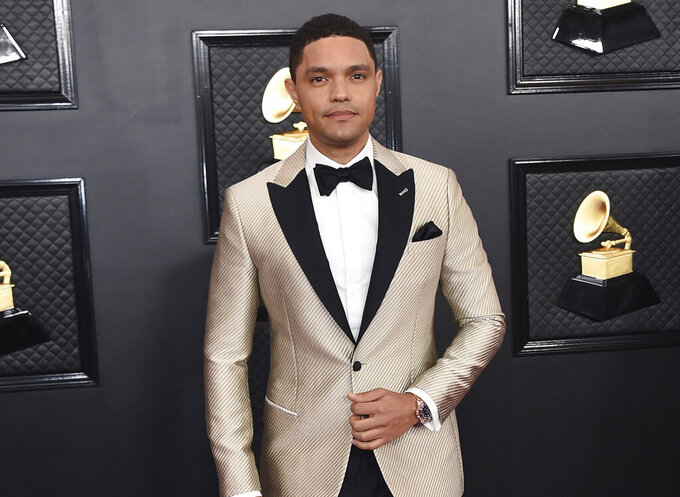 LOS ANGELES (AP) — Trevor Noah took a careful approach hosting “The Daily Show” from his New York apartment during the pandemic, but he said traveling across the country to host the Grammys was an opportunity he couldn't pass up.

“If you get asked to host the Grammys, I don’t think you take long to say ‘yes,’” said the Emmy winner, who will host Sunday's Grammy Awards from downtown Los Angeles. “All you figure out is the how.”

Initially, Noah wondered if the Grammys would be like most other major award shows that were held virtually during the pandemic. But he was assured that his first time hosting the ceremony honoring music's best would be in person.

Noah said the ceremony, which airs at 8 p.m. Eastern on CBS and Paramount+, will have a “music festival vibe” with parts of the show held outdoors. He expects an entertaining show with several performers set to hit the stage including Taylor Swift, Billie Eilish, Cardi B and BTS.

“Unlike most award shows, the Grammys also are about the performances,” said Noah. Past hosts include Alicia Keys, James Corden and LL Cool J.

“So, at the Oscars, you can’t have like Denzel (Washington) perform his movie,” he continued. “But the Grammys, you can have the artists perform their song. What’s made it unique is that we’ve managed to make a show that is a full show for you at home. When you watch it, you won’t be spending the whole time like ‘Aww man, this is a pandemic show.’ Like no, this is one of your favorite concert shows.”

The Recording Academy said music artists in attendance will be socially distanced while playing “music for each other as a community and celebrate the music that unites us all.” The show was originally supposed to take place on Jan. 31, but the event was delayed because of the coronavirus pandemic.

Noah said he is looking forward to all the performances, but he’s particularly excited to watch Bruno Mars — his favorite live performer. Under the R&B group name Silk Sonic, Mars and Anderson Paak expect to hit the stage together on Sunday.

So far, Noah said venturing out to prepare for his Grammy hosting duties around other people has been “amazing” and “surreal.” While watching rehearsals, he said the performances gave him and others life.

“What’s really cool is seeing how the music almost gets into people’s veins,” he said. “And for the period of the performances, you can feel people get taken off to a different place. You can feel people transported into a different place and time. It’s been really wonderful to see how much fun the musicians have, how much fun the crew has while listening to the music. It’s a vibe. I’m really excited for the night.”