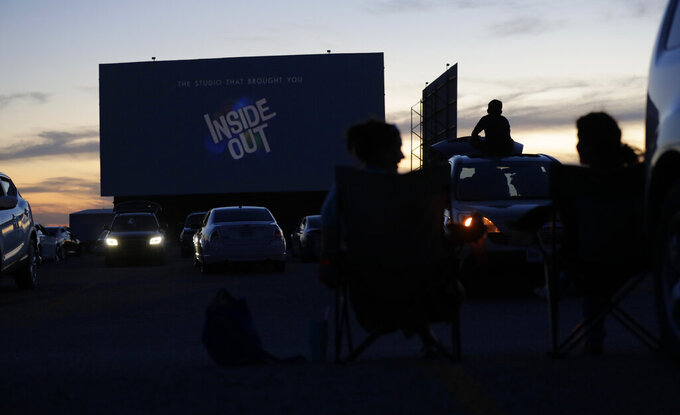 Using social distancing practices, moviegoers watch a show at the Stars and Stripes Drive-In Theater that reopened in New Braunfels, Texas, Friday, May 1, 2020. Texas' stay-at-home orders due to the COVID-19 pandemic have expired and Texas Gov. Greg Abbott has eased restrictions on many businesses that have now opened, including theaters. (AP Photo/Eric Gay)

LOS ANGELES (AP) — Tribeca is taking audiences back to the drive-in this summer.

Tribeca Enterprises, IMAX and AT&T said Wednesday that they are partnering to launch “Tribeca Drive-In,” a summer programming series of new and classic films, music and sporting events. It’ll take place in drive-in theaters and “other exclusive venues” nationwide starting on Thursday, June 25. The lineup will be announced in the coming weeks.

“We’re taking the spirit of Tribeca around the country by creating a safe environment where audiences can come together and enjoy the sense of connection found by going to the movies,” Jane Rosenthal, Tribeca Enterprises and Tribeca Film Festival co-founder and CEO, said in a statement.

The organization said that they will work with local vendors to support small businesses and tailor the experience to each community.

Tribeca co-founder Robert De Niro said they were excited to give people "something to look forward to this summer and reinvent a classic moviegoing experience for communities to enjoy together safely.”

The majority of cinemas across the country have been closed due to the coronavirus pandemic since mid-March. While some states are experimenting with a soft reopening, most major chains say they will remain closed until Hollywood studios ensure a steady stream of new programming. The earliest theatrical blockbuster on the schedule is Christopher Nolan’s “Tenet,” for July 17.

Many drive-in theaters, however, have remained open, since they are naturally suited to social distancing. “Trolls World Tour,” which was made available to rent on video on demand services on its release date, also played at 21 drive-in locations across the country. But like enclosed movie theaters, drive-ins also need programming to function.

As the lead technology partner, IMAX will use its digital re-mastering process to enhance the image and sound experience, in addition to helping curate the program.

IMAX CEO Rich Gelfond said that they hope to “remind people of the magic of going to the movies as we look forward to reopening theatres around the world.”

John Vincent, president of United Drive-In Theatre Owners Association, said that drive-ins appreciate the chance to "bring content to our screens in this much-needed environment.”