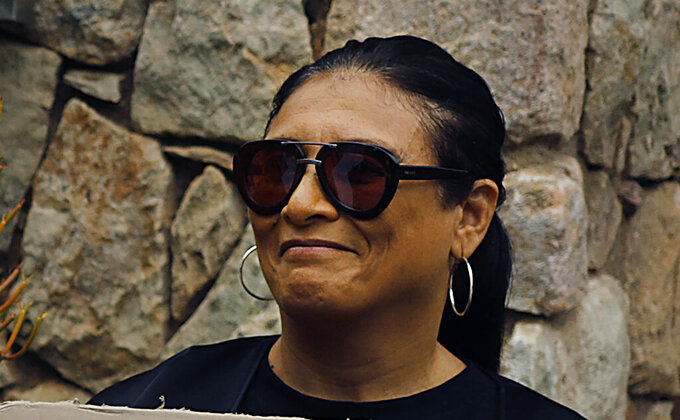 Karima Brown is photographed during a protest in Johannesburg, Tuesday, Jan. 21, 2020. Tributes from journalists and politicians are coming in for prominent South African journalist Karima Brown who died of COVID-19 on Thursday, March 4, 2021. Her family said in a statement that Brown had been hospitalized after falling and will be buried Thursday according to Islamic burial rites. (AP Photo)

JOHANNESBURG (AP) — Tributes from journalists and politicians are coming in for prominent South African journalist Karima Brown who died of COVID-19 on Thursday.

Brown, 54, had been hospitalized after falling ill and will be buried Thursday according to Islamic burial rites, her family said in a statement.

“We are enormously proud of the fierce determination she had shown, since her early years, to get involved in bringing about a more inclusive, and anti-racist South Africa," said the statement. “This determination also shaped her fearless approach to journalism. She was driven by a conviction that journalism must be in service of justice.”

In the 1980s, Brown was involved in the struggle against apartheid, South Africa’s now-abolished system of racist minority rule, as a member of the United Democratic Front, a coalition of anti-apartheid organizations which supported the then-banned African National Congress.

Although proud of her support for the ANC, as a journalist Brown was critical of its policies as South Africa's ruling party. She also challenged the country's opposition parties.

She recently won a court case against the popular leader of the leftist Economic Freedom Front party Julius Malema after he published her cellphone number on social media, leading his supporters to harass and threaten Brown.

Brown's lively television show, The Fix, about South Africa's politics, was widely watched and she was known for pithy, outspoken comments on corruption, women's rights, racial inequality, and other issues. Previously she held senior positions including political editor of the Business Day newspaper and chief group executive at the Independent Media newspaper chain.

“For a long time, Karima has been a robust voice in South Africa’s media landscape. Her years of activism preceded this. She had a big personality and didn’t shy away from voicing her opinions. Karima believed in hope," Norman Munzhelele, managing editor of the broadcaster eNCA, where Brown was employed at the time of her death.

“She was also a loving mother, a loyal friend, and a committed colleague. Her death leaves a massive void for many," he said.

The South African government also paid tribute to Brown, saying “her contribution to the journalistic profession and fearlessness in carrying out her job will sorely be missed,” Cabinet minister Khumbudzo Ntshavheni said.

She is survived by her son Mikhail Brown and her brother Zain.

South Africa has now recorded a cumulative total of more than 1.5 million confirmed infections, including more than 50,000 deaths, since the pandemic began last year.

More than 83,000 health workers have been vaccinated since it began its inoculation drive two weeks ago. South Africa's government aims to vaccinate 67% of its population, about 40 million people, by the end of the year, although critics say the goal is unrealistic.