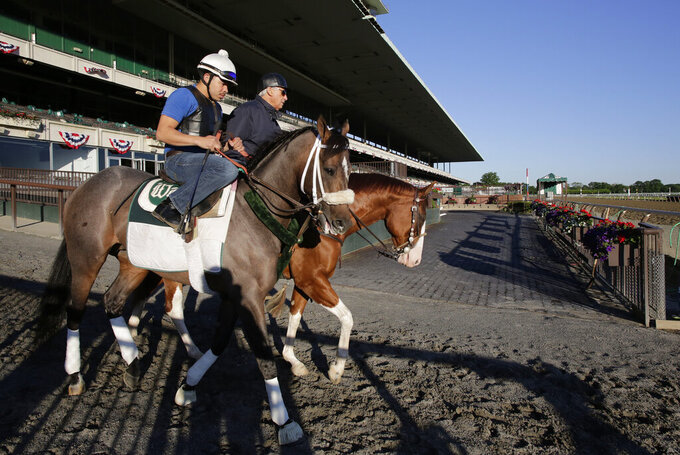 FILE - In this June 4, 2013, file photo, Preakness winner Oxbow, left, enters the track for a light workout at Belmont Park in Elmont, N.Y. Trainer D. Wayne Lukas is at rear. The order of the Triple Crown races could be different this year. “If you go from a mile-and-a-half and start dropping back, it’s going to change a lot,” said Lukas, winner of 14 Triple Crown races. “It’ll change how you train, it’ll change the type of horse that will end up in the Derby. It’ll be a very, very significant change.” (AP Photo/Mark Lennihan, File) 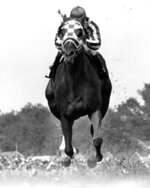 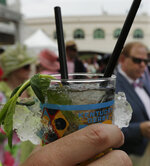 This promises to be a Triple Crown season like no other.

Instead of kicking off the chase this weekend with the Kentucky Derby, the storied race may end up capping the trio of races on Labor Day weekend.

Instead of 3-year-old colts saving the longest race for last, maybe they begin in New York with a shortened Belmont Stakes in late May or June. Or perhaps the Preakness Stakes at Pimlico will be run on a sweltering July afternoon.

All scenarios are on the table, with talks ongoing among the host tracks and broadcaster NBC. Government and public health officials weighing in on health and safety concerns involving the coronavirus pandemic figure heavily, too.

The heavyweight of the group, Churchill Downs, announced in March it was moving the Derby to Sept. 5 because of the coronavirus that has halted live racing at some major tracks. It’s the first time since 1945, when it was run in June, that the Derby won’t go off on the first Saturday in May.

And if it comes to it, the track has no problem bringing up the rear in the Triple Crown series.

Especially if the same horse wins the first two legs to set up a Triple Crown bid when the Derby rolls around.

“However it shakes down, this is a very unique year,” Rogers said. “We’ve all had to make some very difficult, but necessary, decisions. That’s not unique to Churchill; that’s us as a society in general.”

There is precedent for the Derby, Preakness and Belmont to be held out of order. Prior to 1931, the Preakness was run before the Derby 11 times. In 1917 and 1922, the Derby and Preakness were run on the same day in May.

Starting in 1930, the term Triple Crown became popular in referring to the three races and since 1931, the Derby, Preakness and Belmont have been run in that order.

The Maryland Jockey Club and New York Racing Association have yet to announce new dates for the Preakness and Belmont. The 1 3/16-mile Preakness is scheduled for May 16, which would have been two weeks after the 1 1/4-mile Derby’s original Saturday date. The 1 1/2-mile Belmont is set for June 6, its usual spot five weeks after the Derby's original date.

“If you go from a mile-and-a-half and start dropping back, it’s going to change a lot,” said trainer D. Wayne Lukas, winner of 14 Triple Crown races. “It’ll change how you train, it’ll change the type of horse that will end up in the Derby. It’ll be a very, very significant change.”

There also is the prospect of not having over 150,000 behatted, well-dressed, mint julep-sipping fans at the Derby, the raucous infield crowd at the Preakness or a busy grandstand at the Belmont.

NYRA is seeking to restore live racing now at Belmont Park and later Saratoga, whose meet opens in July. Its plan includes no spectators, additional health and safety precautions, and only essential employees at the track. Churchill Downs has received clearance to resume live racing without fans on May 16.

The pandemic has also upended the Road to the Kentucky Derby, creating challenges for the series of prep races that determines who is in the race. Points are awarded to the top four finishers and the top 18 finishers on the leaderboard earn spots in the starting gate for the Derby. Two spots are reserved for the top points earners from Europe and Japan.

A revised schedule of prep races isn't expected until the Preakness and Belmont dates are re-set, and live racing returns in Maryland, New York and California.

Churchill Downs has said horses that earned points before the remaining schedule was thrown into disarray by the pandemic will keep them. Florida Derby winner Tiz the Law leads the standings with 122 points.

Reorganizing the prep races and the Triple Crown series will require cooperation among tracks that are used to going their own way in a sport lacking centralized oversight.

“We’ve had conversations with a number of racetracks about potentially hosting a Road to the Kentucky Derby qualifying race,” Rogers said. “As soon as the races are finalized and racetracks are back up and running, we’ll make that announcement.”

It’s one that owners and trainers anxiously await.

“It’s hard when you have horses ready to run and you don’t have a game plan on where to run them,” said Liz Crow, a racing manager and bloodstock agent.

If the Triple Crown begins with the Derby in September, trainers may decide to rest their top contenders. However, sticking with the traditional timing of the series would mean it ends just a month before the Breeders' Cup, set for Nov. 6-7 at Keeneland. That would leave horses little time to regroup for the lucrative world championships.

Some horses could benefit from all the changes, others hurt by it. The Triple Crown is restricted to 3-year-olds, giving horses only one chance to run in it.

“There is going to be some horses that go by the wayside,” trainer Mark Casse said. “Then there’s going to be some coming on that, if we had ran the Derby the first Saturday in May, they would’ve never had any chance.”

However it plays out, the Derby’s traditional May date won’t pass unnoticed.

Churchill Downs and NBC will mark the occasion with three hours of coverage on Saturday, including re-airing American Pharoah’s Derby win in 2015, which launched the colt on a path to becoming the first Triple Crown winner in 37 years.

Also on tap is the track’s first virtual horse race between the 13 past Triple Crown winners — from Sir Barton in 1919 to Justify in 2018 — with Larry Collmus calling the race.

“It’s so crazy,” said Jack Wolf of Starlight Racing, co-owner of Derby contender Charlatan. “Nobody really knows where we stand with all this.”

AP Sports Writers David Ginsburg in Baltimore, Gary B. Graves in Louisville, Kentucky, and Stephen Whyno in Washington contributed to this report.