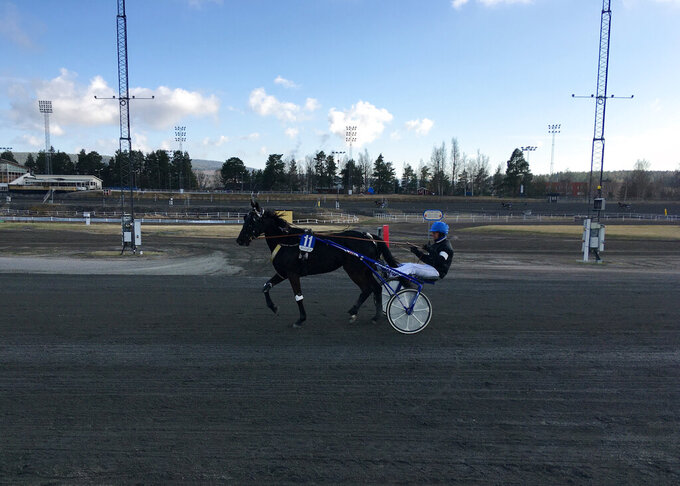 In this photo taken on Thursday, April 30, 2020, Henrik Sundberg rides horse Millimina at Bergsaker racecourse in Vasternorrland, Sweden. Swedish trotting is one of only a handful of European sports to have persevered during the coronavirus outbreak while competitions elsewhere shut down across the continent. That’s not just good news for the 40,000 people working in the equestrian sector in Sweden. It’s something of a savior for betting companies and gamblers around the world who have been starved of their usual diet of top-class sport in Europe. (AP Photo/Steve Douglas)

BERGSÅKER, Sweden (AP) — Rikard Skoglund changes into his blue-and-white silks in his car, gathers his helmet and whip, then heads to the track for another evening of horse racing.

Sweden’s No. 1 horse driver is still working during the coronavirus pandemic.

In fact, he’s never been in more demand.

Swedish trotting, or harness racing, is one of only a handful of sports in Europe to have persevered through the pandemic while other competitions — professional or amateur — shut down across the continent.

That’s not just good news for the 40,000 people working in the equestrian sector in Sweden. It’s something of a savior for betting companies and gamblers around the world.

“Our prize money comes from betting money,” Skoglund told The Associated Press before the first race of a meeting at Bergsåker racecourse near the east coast of Sweden. “So now the whole world is betting on Swedish harness racing, it’s a huge opportunity for us.”

Hans Lord Skarplöth, chief executive of the betting firm ATG that specializes in horse racing in Sweden, told the AP that international gambling on Swedish races is up around 600% since the middle of March.

Jockeys and horse drivers in this often-overlooked part of the world might never have this exposure and earning potential again.

“Of course it affects us that we can’t have the public in to watch, but it’s more important for us to have the core business (operating),” said Maria Croon, CEO of Swedish Trotting. “We aren’t trying to capitalize, just to continue with as less effects as possible.”

Sweden has been something of an outlier during the pandemic because the government’s restrictions aren’t as tight as most other countries. So its horse racing industry has been allowed to stay open for business, though recommendations and directives are in place to minimize the risk for workers.

No spectators are allowed, with even owners of horses prevented from being at the track for races which are nationally televised. Trainers and jockeys are recommended to change clothes in their car, and social distancing is advised.

At the meeting in Bergsåker, hand disinfectants were available and there were signs around the oval track telling those present to keep two meters (six feet) from each other. Some jockeys and drivers wore mouth coverings. People sat apart in a small, wooden stand halfway down one side of the track.

“I am more worried when I go into town or to a shop,” Skoglund said. “If you go to the supermarket, it is much more dangerous than driving horses.”

Horse racing has continued without spectators in parts of Australia, New Zealand and Japan, and also in some American states. But it was brought to a halt in the sport’s major racing countries in Europe, like Britain, Ireland and France.

The Swedish racing market has proved to be vital for the multibillion-dollar sports gambling industry, especially in European time zones.

“This is, of course, good for ATG revenues but even more important for the horse industries,” Skarplöth said. "Thanks to Swedish horse racing, many of these companies still could have some earnings by offering Swedish horse racing to their customers.”

Glance at a betting website, and it’s slim pickings elsewhere for sports in Europe. There’s soccer in Belarus and Turkmenistan, while Russia is staging table tennis, volleyball and hockey games.

The standard of these competitions isn't high. The players taking part in live-streamed table tennis from the Liga Pro organization are often ranked outside the top 500 by the Russian Table Tennis Federation, which is itself not one of the world leaders. Yet their matches have become a staple for the world's online bookmakers.

Things could change soon, of course. Some European soccer leagues are starting to crank back up and play could resume at the end of this month. Horse racing in France is planning to restart next week.

In the meantime, Swedish trotting is enjoying its unlikely place in the spotlight.

“It's been really fun,” Skoglund said, “to show the world our amazing harness racing.”