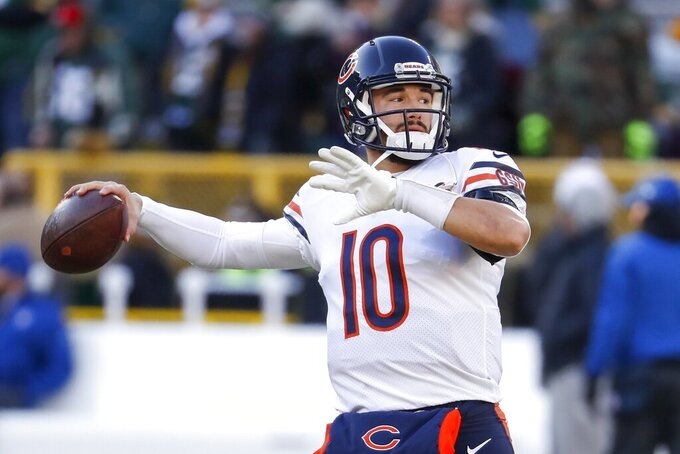 FILE - In this Dec. 15, 2019, file photo, Chicago Bears' Mitchell Trubisky warms up before an NFL football game against the Green Bay Packers, in Green Bay, Wis. Trubisky understands why the Bears acquired quarterback Nick Foles. That doesn't mean he's ready to hand over the starting job. Trubisky said the trade for Foles gave him extra motivation to show he can develop into the franchise quarterback the Bears thought he would become when they moved up a spot to draft him with the No. 2 overall pick in 2017. “That's the business we're in,” he said in a conference call on Friday, June 12, 2020. (AP Photo/Matt Ludtke, File)

That doesn't mean he's ready to hand over the starting job.

Trubisky said the trade for Foles gave him extra motivation to show he can develop into the franchise quarterback the Bears thought he would become when they moved up a spot to draft him with the No. 2 overall pick in 2017.

“That's the business we're in,” he said in a conference call on Friday. “I’ve been motivated since our season ended last year. I didn’t feel like it went the way we wanted to, and we left a lot out there. But I’m excited for this year. I think it’s going to be a good competition.”

Trubisky said he wasn't surprised when the Bears acquired Foles from Jacksonville in March or when they informed him they weren't picking up his fifth-year option for 2021.

After all, he didn't perform the way they expected last season. And the Bears stumbled, going 8-8 and missing the playoffs for the eighth time in nine years.

It certainly wasn't what they envisioned after winning the NFC North at 12-4 in 2018 — coach Matt Nagy's first season.

While a defense that has excelled in recent years performed well enough, the offense ranked among the NFL's worst. The Bears lacked playmakers to go with receiver Allen Robinson, were banged up on the line, ignored the run game and got little production from their tight ends.

That obviously didn't help Trubisky. But it doesn't completely explain why he struggled in his second year in Nagy's system.

Picked to replace Jared Goff in the Pro Bowl after the 2018 season, Trubisky's yards (3,138), completion rate (63.2%), touchdowns (17) and rating (83) all dropped from the previous year. He made too many errant throws and questionable decisions. And the fact that Kansas City's Patrick Mahomes and Houston's Deshaun Watson — who were taken later in the 2017 draft — continued to shine only magnified Trubisky's struggles.

Nagy challenged him to get a better read on opposing defenses. And the Bears made it clear they would look to bring in competition.

For that, Trubisky doesn't blame them. The same goes for their decision not to exercise his option.

“I kind of felt like I had it coming,” Trubisky said. “I put myself in their shoes — if I was looking at myself, I feel like I would have to go out and earn that fifth option, and I feel like the way I played last year didn’t merit that.”

The 2018 Super Bowl MVP with Philadelphia, he lost his starting job to rookie Gardner Minshew during an injury-riddled season with Jacksonville and appeared in just four games after signing a four-year, $88 million contract.

Though Foles knows the system and has a history with Nagy in Philadelphia and Kansas City, the COVID-19 pandemic has prevented him from practicing with the Bears. Trubisky believes that gives him an edge in the competition.

But Trubisky also knows time is running out. General manager Ryan Pace made a bold move when he traded up a spot with San Francisco on draft night to take the quarterback, one that hasn't paid off the way he hoped. And now, Trubisky is fighting for his own job.