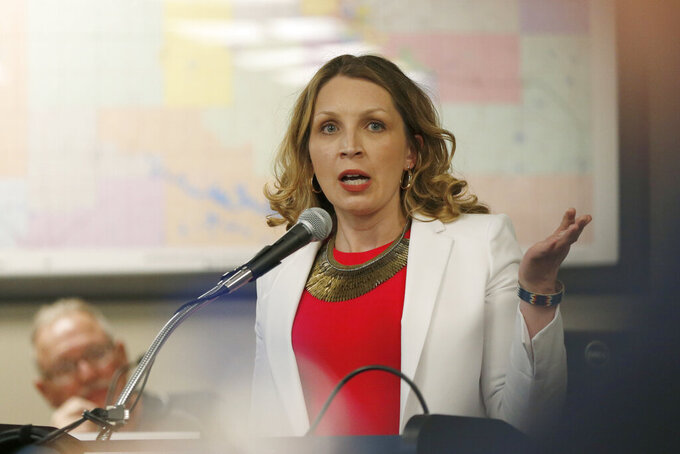 The 7th District race between Republican Tom Tiffany and Democrat Tricia Zunker will be decided May 12. Turmoil caused by the coronavirus pandemic, coupled with it being a special election, has injected more uncertainty into a race that typically would heavily favor the Republican.

Tiffany, a state lawmaker since 2011, is closely aligned with Trump, much like Duffy who remains one of the president’s most vocal backers on cable TV. Trump has publicly endorsed Tiffany, but the pandemic has prevented the president from giving Tiffany a boost in person. Vice President Mike Pence had scheduled an appearance in the district for Tiffany in March but canceled it to remain in Washington due to the coronavirus.

“President Trump’s support is important, especially up here,” Tiffany said from his home in Minocqua. “People strongly support him. It would have been really nice to have a rally because there’s no one like President Trump to turn people out and turn them out in the thousands.”

Zunker, 39, is an attorney and president of the Wausau School board, a justice on the Ho-Chunk Nation Supreme Court and a professor at three colleges, including one law school. Her endorsements include U.S. Sens. Elizabeth Warren, of Massachusetts, and Tammy Baldwin, of Wisconsin, and a host of liberal groups including EMILY’s List and Planned Parenthood. She is also on a leave of absence from serving on the board for the American Civil Liberties Union of Wisconsin.

Zunker is trying to flip the district that has been under Republican control since 2011. Zunker has less money and name recognition than Tiffany, but she’s focused her effort on her home base in voter-rich Wausau where she was raised and still lives. She's a supporter of Medicare-for-all as part of a public option, abortion rights, legalizing medical and recreational marijuana and releasing non-violent drug offenders from prison to alleviate overcrowding.

Tiffany argues that Zunker is too liberal for the district, which stretches from Wausau in the south up to Lake Superior and includes popular tourist destinations like Bayfield and Madeline Island. While Trump carried Wisconsin by less than a point, he won by 20 times that in the 7th District.

Zunker believes her support crosses partisan boundaries and people are ready for a change.

Tiffany contrasts his anti-abortion record and strong support for 2nd Amendment gun rights against Zunker serving on the ACLU state board and her backing from Planned Parenthood, a group that pushes for abortion rights and performs the procedure in Wisconsin.

Tiffany, 62, was born on a dairy farm in the district and ran a tourist boat business on the Willow Flowage for 20 years. Joining the Legislature in 2011, he was a close ally of then-Republican Gov. Scott Walker and voted to pass the anti-union law, Act 10. He also voted in favor of legalizing concealed carry and moving the state forestry division to northern Wisconsin and pushed to locate an open pit mine in northern Wisconsin that ultimately never came to the state. Zunker campaigns against mining.

Zunker, in addition to being the first Native American elected to Congress should she win, would also be the first woman to represent the 7th.

The election is the second in Wisconsin in the past five weeks conducted amid the coronavirus pandemic. Unlike the statewide April 7 presidential primary and spring election, the one on May 12 is limited to the 7th, which covers all or portions of 26 counties in northern and northwest Wisconsin.

Absentee voting, similar to the April election, promises to be high. About 73% of all voters casting ballots last month did so absentee. To date, more than 93,000 had been requested and about 40,000 have been returned.

In addition to eliminating campaign rallies and increasing absentee voting, the pandemic has grounded both Tiffany and Zunker in the massive 18,700-square-mile district that’s larger than New Jersey, Connecticut, Delaware and Rhode Island combined. They’ve been forced to campaign largely from home by telephone, Zoom meetings and social media outlets.

The winner will serve the remainder of the year but will have to stand for election again in November to serve a full two-year term.

This story has been corrected to show that Zunker teaches at three colleges, one of which is a law school, not three law schools.