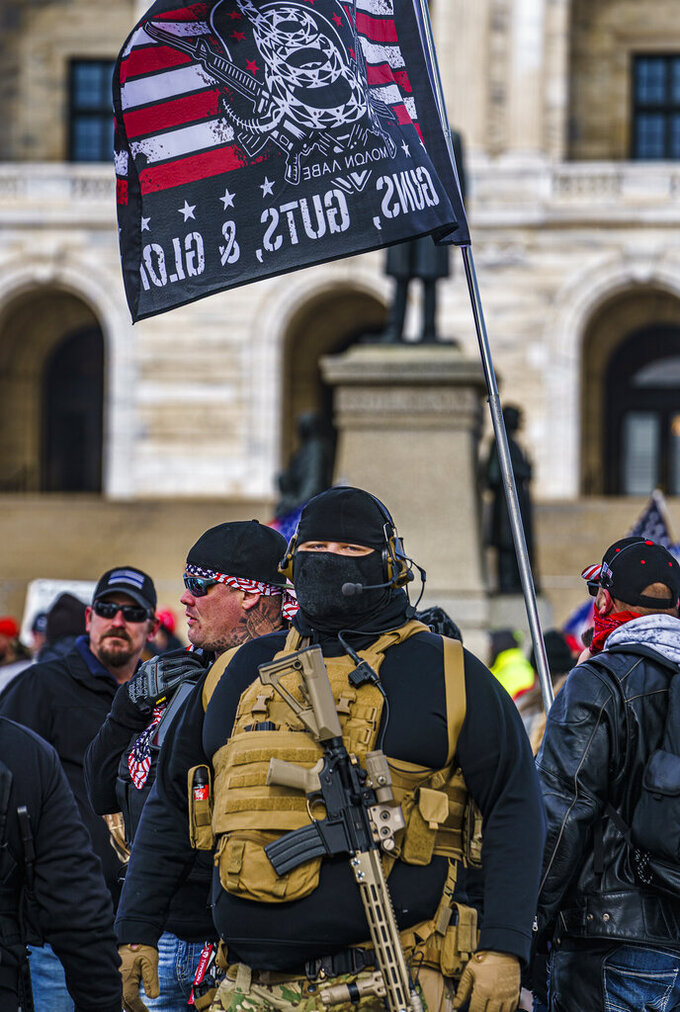 Protesters attended a rally in support of President Donald Trump on the steps of the Minnesota State Capitol on Wednesday, Jan. 6, 2021 in St. Paul, Minn. (Richard Tsong-Taatarii/Star Tribune via AP)

MINNEAPOLIS (AP) — Hundreds of supporters of President Donald Trump gathered at the Minnesota Capitol in St. Paul for what was billed as a “Storm the Capitol” rally on Wednesday to protest against the certification of Joe Biden as the winner of the presidential election.

Meanwhile, Minnesota’s Republican members of Congress, who had remained publicly silent before Wednesday over how they planned to vote, issued only brief criticisms of the storming of the U.S. Capitol by angry Trump supporters, which forced lawmakers to take shelter and interrupted challenges to Biden’s Electoral College victory. They did not say whether they considered Trump or others who have sought to undermine confidence in the election results responsible for the violence.

Minnesota Democrats, by contrast, leveled sharp denunciations holding Trump and other GOP leaders directly to blame. Rep. Ilhan Omar, a frequent target of Trump's ire, said she would draw up articles of impeachment.

The demonstration outside the Minnesota Capitol was heavy on speeches and chants in opposition to both the outcome of the election and the emergency measures that Democratic Gov. Tim Walz has implemented to stop the spread of COVID-19, the Star Tribune of Minneapolis reported..

There were loud cheers when the crowd of up to 500 learned that violent protesters in Washington had breached the U.S. Capitol complex. But there were no arrests, Department of Public Safety spokesman Bruce Gordon said. A large contingent of state troopers guarded the Capitol, which has been ringed with fencing since last summer's unrest over the death of George Floyd. Gordon said the increased security presence would remain in place in light of Wednesday's protests.

Alley Waterbury, a Woodbury activist, led prayers and chants of “four more years,” the Star Tribune reported. A video clip of her remarks posted online included her beseeching Walz to “please take time to meet with us one-on-one, because if you don’t, you’re going to make us do things we don’t want to do. We’re going to come for you, but we want to talk to you first."

Dozens of the Minnesota protesters, including several carrying Trump flags, later chanted Trump's name outside the governor's residence, about three miles away. State troopers stood guard inside the iron fence surrounding the mansion. As events unfolded, Walz canceled two news conferences about the loosening he announced Wednesday of coronavirus restrictions on bars, restaurants and other gathering spots.

“I just want to take just a moment to assure Minnesotans that the situation here is calm and stable," Walz said .

Spokespeople for Republican U.S. Reps. Tom Emmer, Pete Stauber and Michelle Fischbach did not immediately return messages seeking interviews on the upheaval. Stauber declined to comment in a brief conversation.

“I support the democratic process that I have the privilege of engaging in today,” tweeted Emmer, a member of the House GOP leadership. “However, any violence against law enforcement goes completely counter to this process, and the rule of law that our police are sworn to protect."

Fischbach, who was facing her first important vote as a newly elected representative, tweeted: “Respectful disagreement is fundamental to our democracy. The violence that we’re seeing, especially toward law enforcement, is unacceptable.”

Fischbach said earlier Wednesday that she supported the challenges, but Stauber said he would not. Hagedorn's and Emmer's statements did not address that issue.

“Overturning the results of the Electoral College would be an overstep of Congress’ limited role and would revoke power from where it should be derived – you, the people, and the states,” Stauber said in a statement.