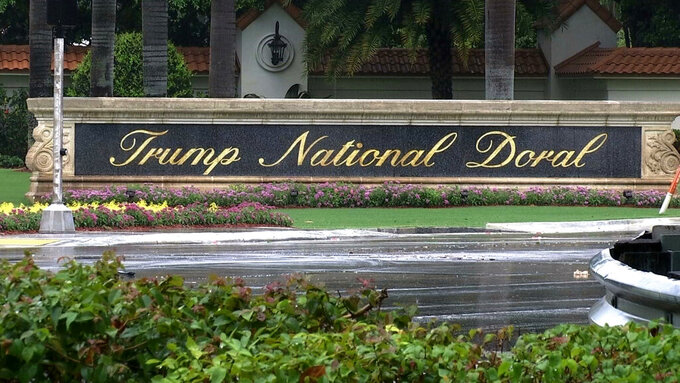 FILE - This June 2, 2017, file frame from video shows the Trump National Doral in Doral, Fla. Donald Trump’s struggling Doral golf club near Miami could be thrown a lifeline if a Florida bill being hammered out behind closed doors allows more gambling in the state and the property is allowed to operate a casino. (AP Photo/Alex Sanz, File)

TALLAHASSEE, Fla. (AP) — Donald Trump’s struggling Doral golf club near Miami could be thrown a lifeline if a Florida bill being hammered out behind closed doors allows more gambling in the state and the property is allowed to operate a casino.

The bill, pushed by the owner of a landmark Miami Beach hotel, faces strong opposition and it’s not clear the ex-president has done anything to lobby for it. Still, he has long wanted to put a casino at Doral and a green light couldn’t come fast enough as his company reels from pandemic shutdowns and a backlash over the U.S. Capitol riot.

No proposal has been made public, but it would reportedly allow the owner of a gambling license attached to a jai-alai building or racetrack to transfer it to another property. Trump doesn’t own any of those, but could buy one and move the license to his Trump National Doral property. The Trump Organization has done nothing to quell the idea, while not explicitly endorsing it.

“Many people consider Trump Doral to be unmatched from a gaming perspective — at 700 acres, properties just don’t exist of that size and quality in South Florida, let alone in the heart of Miami,” Trump's son Eric said in a statement Thursday.

Even though Donald Trump and Florida Gov. Ron DeSantis are close allies, any bill would face opposition from other tourism and gambling interests.

The Seminole Tribe of Florida, which owns several Florida casinos, and Walt Disney World have spent millions against previous efforts to expand gambling off the state’s tribal lands and hold major sway in the state Capitol. Disney did not respond to an email Thursday seeking comment and the Seminoles had no comment on “speculative ‘what if’ scenarios.”

Another potential hurdle is a 2018 amendment to the state constitution that says casino-style gambling can’t be expanded off tribal lands unless approved in a statewide ballot measure that garners at least 60% support.

The push is being made by Jeffrey Soffer, who owns both the Fontainebleau Hotel and a former dog track. The state recently barred dog racing, but his license there allows him to have slot machines.

Soffer’s office did not immediately respond Thursday to an email seeking comment, but the Miami Herald reports he has been entertaining state legislative leaders aboard his yacht — including inviting some to a party with Tampa Bay Buccaneers quarterback Tom Brady hours after he won last month’s Super Bowl.

A gambling license for Doral would mark a return to the gambling business for Trump, who operated casinos for several years in Atlantic City, New Jersey, before they collapsed into bankruptcy in the early 1990s and twice again in the first years of the new millennium.

It could also provide a financial shot in the arm to Trump’s Doral golf club, by far his biggest revenue generator among his 17 golf properties and would make it more valuable if he tried to sell it. The club has lost some business in a backlash against the ex-president’s divisive rhetoric.

Trump was so desperate to revive the property’s fortunes at one point, he even briefly backed holding the G-7 meeting of world leaders there despite obvious conflicts of interest. Then the pandemic struck last year, and the property was hit even harder. Revenue plunged more than 40%, according to a federal financial disclosure report covering all of last year and a few weeks this year.

Miami Beach Mayor Dan Gelber, a major opponent of casino gambling and a leader behind the anti-casino ballot measure that passed overwhelmingly in 2018, said DeSantis and legislative Republicans would have to choose — loyalty to Trump or loyalty to their constituents.

“Gambling just sucks the the marrow out of your community,” Gelber said. “Casinos are populated with low-wage jobs, they cannibalize other businesses and tend to take money off of people least capable of affording it.”

Trump’s golf resort is in the city of Doral, and the wealthy developer who built much of that Miami suburb of 65,000 residents is vehemently opposed to allowing a casino at Trump’s resort or elsewhere in the state.

Armando Codina said gambling revenue would be siphoned to Tallahassee, while leaving Doral, Miami Beach and Miami to deal with the increased crime and social problems casinos would bring. Codina is a major donor to Republican candidates and causes, though records show he has never given to Trump. He said any GOP legislator who supports the bill will lose his.

“When it comes to my opposition to casino gambling, there are no parties,” Codina said.