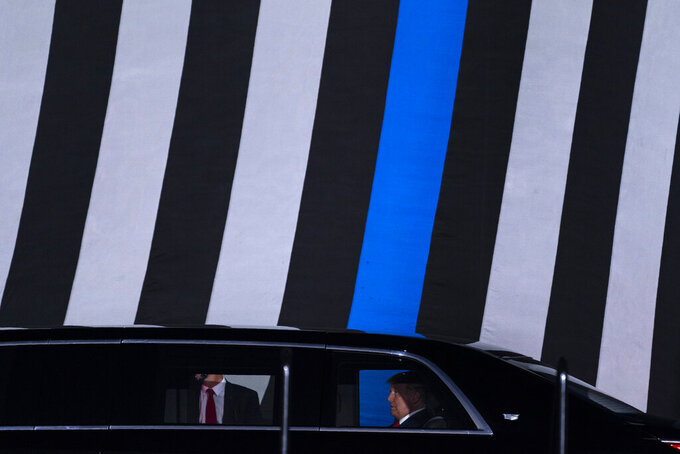 MACON, Ga. (AP) — Backed into a corner and facing financial strains, President Donald Trump went after his opponent's family and defended his own struggle to contain the pandemic on Friday as he fought to energize his sagging reelection bid in the nation's Sun Belt. With Election Day looming, Democrat Joe Biden pushed to keep voters focused on health care in the Midwest.

Trump campaigned in Florida and Georgia, neighboring states he carried four years ago and must win again to extend his presidency. His decision to devote Friday evening's prime-time slot to Georgia in particular highlighted the serious nature of his challenge: Far from his original plan to expand into Democratic-leaning states, he is laboring to stave off a defeat of major proportions.

No Republican presidential candidate has lost Georgia since George H.W. Bush in 1992. And earlier this week, Trump had to court voters in Iowa, a state he carried by almost 10 points four years ago.

In Macon, he cited support from former University of Georgia football star Herschel Walker to win favor from his rally crowd. “How good was Herschel Walker?" Trump said as the Georgia crowd roared. “He's on our side, and he's an incredible guy."

Earlier, in Florida, the president derided the Bidens as “an organized crime family," renewing his daily claims about the candidate's son, Hunter, and his business dealings in Ukraine and China.

More to the point for Trump's Florida audience, he spoke directly to seniors who have increasingly soured on his handling of the pandemic.

“I am moving heaven and earth to safeguard our seniors from the China virus,” Trump said, using his usual blame-shifting term to describe the coronavirus. He also offered an optimistic assessment of the pandemic, even as a surge of new infections spreads across America.

“We are prevailing," the president said, promising to deliver the first doses of a vaccine to seniors when it's ready.

Despite the tough talk, Trump's actions on the ground in Florida underscored the conflicting messages his administration has sent throughout the pandemic. All the president's security personnel and support staff were wearing face masks when Air Force One touched down, but Trump and Florida’s Republican Gov. Ron DeSantis were barefaced. Crowds gathered at the president's subsequent events, many without masks as well.

It was just the opposite as Biden opened his Michigan swing at a suburban Detroit community center. In keeping with his usual protocols, Biden and all the participants wore masks throughout the event, except when they were speaking, and a small crowd of dozens of reporters and supporters watched from folding chairs separated by circles to ensure social distancing.

“He's living in a dream world,” Biden said of Trump's rosy predictions of the pandemic. The former vice president then turned to the Trump administration's court fight to overturn the “Obamacare” health coverage law — including its protection for people with preexisting conditions — without having a replacement plan.

“Mishandling the pandemic isn’t enough for Trump,” Biden charged. “On top of that he’s still trying to take away your health care."

Trump’s campaign, along with the Republican National Committee and associated groups, raised $247.8 million in September, well short of the $383 million raised by Biden and the Democratic National Committee. To open October, the Trump effort officially had $251.4 million in the bank, according to a campaign spokesman, compared with $432 million for Biden.

Trump claimed he could have raised more. He said he could call the heads of Wall Street firms and ask for millions, but added: “I can’t do that though, because you know what, if I do that, I got to do things for them. I could be the world’s greatest fundraiser, but I just don’t want to do it.”

In Georgia, the state’s leading Republicans — including Gov. Brian Kemp and two senators up for reelection — all gathered to bask in Trump’s praise. The defeat of either Sen. David Perdue or Sen. Kelly Loeffler would be a huge blow to the GOP’s prospects for keeping the majority in the Senate.

The president was seeking momentum on the campaign trail a day after he and Biden squared off in dueling televised town halls that showcased striking differences in temperament, views on racial justice and approaches to the pandemic.

On NBC, Trump was defensive about his administration’s handling of the coronavirus, which has claimed more than 217,000 lives in the United States. Angry and combative, Trump refused to denounce the QAnon conspiracy group — and only testily did so regarding white supremacists.

On ABC, Biden denounced the White House’s handling of the virus, declaring that Trump's administration was at fault for closing a pandemic response office established by the Obama administration in which he served.

“It's getting worse, as predicted,” Biden said Friday in Michigan of the rising coronavirus numbers. “The president knew and lied about knowing.”

Biden also sought to win support from the state's auto workers during an appearance at the Michigan State Fairgrounds. “I’ve always believed in Michigan. We have the finest auto workers in the world here," Biden said.

While decidedly on the defensive on the ground in key states, Trump released a scathing new ad on Friday attacking Biden's record on race. Specifically, the ad seizes on Biden's support for a criminal justice law that disproportionately punished people of color.

“He insulted us, jailed us, we must not elect him president,” the narrator declares.

It's unclear whether the attack ad will break through the saturated airwaves. Biden and his allies are outspending Trump and his allies on paid advertising more than 2 to 1 through Election Day, according to the advertising tracking firm Kantar/CMAG.