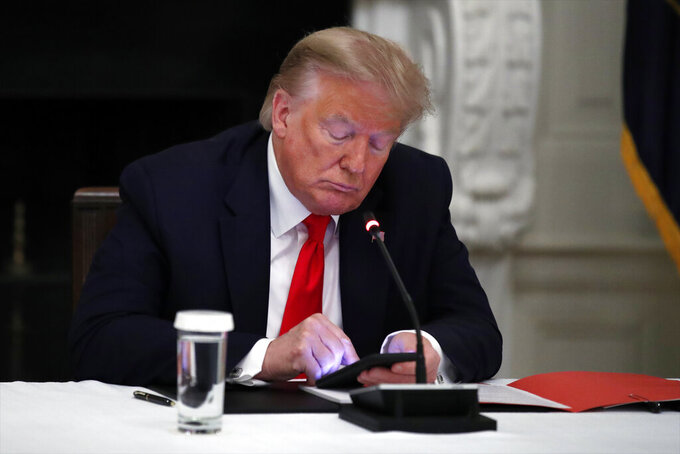 President Donald Trump looks at his phone during a roundtable with governors on the reopening of America's small businesses, in the State Dining Room of the White House, Thursday, June 18, 2020, in Washington. (AP Photo/Alex Brandon)

WASHINGTON (AP) — The Supreme Court’s rejection of one of Donald Trump’s key immigration measures reignites a hot-button issue in a presidential campaign already scorched by pandemic, economic collapse and protests over police brutality and racial injustice.

The president is betting that he can energize his most loyal supporters by fighting the Supreme Court, which decided on procedural grounds Thursday that he couldn’t end legal protections for young immigrants. Trump, who often attempts to shift the nation's focus to immigration when forced to defend himself on other fronts, said Friday he would renew his legal effort.

His immigration push is risky, even for someone who has built his political career on defying conventional wisdom. It could allow Trump to fire up his base on an issue that was a centerpiece of his 2016 victory while highlighting Democratic challenger Joe Biden’s struggle to win over Latino voters. But it could also further alienate swing voters including suburban women who could decide the election.

Some Republicans say that, with less than five months before November, it’s not a fight worth having.

"It doesn’t make any political sense, or moral sense or ethical sense,” said Republican strategist Tim Miller, a frequent Trump critic and veteran of Jeb Bush's unsuccessful 2016 presidential run. "Anybody that likes (Trump) because of his willingness to ‘go there’ on racial and immigration issues is already with him, and he’s not picking up anybody else.”

Still, Trump has built his presidency around hard-line immigration policies and a crackdown on the U.S.-Mexico border. He's been eager to return to those themes after months of negative headlines about the coronavirus and an economy devastated by it.

The president plans to travel to Arizona next week to celebrate 200 miles of new border wall that has been completed during his term, and hold just his second rally after months of campaigning suspended amid more than 100,000 deaths from COVID-19.

His decision to resume big rallies despite virus concerns is another example of his determination to transform an issue into a political fight his supporters can embrace.

But COVID and the border wall are different from the 8-year-old Deferred Action for Childhood Arrivals Program, which protects 650,000 people brought to the U.S. as children from deportation and authorizes them to work.

Polls show widespread support for the program known as DACA, as well as for immigrants brought to the U.S. illegally through no fault of their own.

Some Trump allies acknowledge worries about losing support among moderates. But the president and some of his aides argue that will be easily offset by excitement among steadfast conservatives.

Biden, meanwhile, has promised to send legislation to Congress codifying DACA on his first day as president, if elected. But he has also refused to back decriminalizing illegal border crossing, unlike Vermont Sen. Bernie Sanders and other Democrats who unsuccessfully sought the Democratic nomination.

Sanders routinely out-polled Biden among Latino voters during the primaries, helping power the senator's big wins in Nevada and California, though Biden saw some improvement among Hispanics in places like Texas and Arizona.

Chuck Rocha was Sanders’ top aide on Latino outreach and has since launched a political action committee aimed at motivating Hispanic voters, especially in battleground states like Pennsylvania. He said he already has “people in the film room" and is planning to use the DACA decision — and the president's vow to go back to court — "to draw a contrast between Joe Biden and Donald Trump.”

“There’s a motivation factor we worry about with younger Latinos who supported Bernie Sanders who are not onboard with Joe Biden yet,” Rocha said. “But these people went to school with these DACA recipients. These kids are friends with these DACA recipients. These people understand that their friends are just as much American as they are, so it really cuts at the heart of an emotional issue."

Julia Rodriguez, a senior Biden campaign adviser, countered that Biden isn’t willing to lie quietly back while “Trump continues to double down on his base.” Instead, she said, Biden is “reaching out to women voters, to young voters, to voters of color.”

Trump and his campaign also have focused their response to the Supreme Court decision on their efforts to nominate more conservative justices to the Supreme Court. That's despite the fact that Chief Justice John Roberts, who was appointed by Republican President George W. Bush, authored the DACA ruling.

Trump has used the federal courts as a powerful motivator before, stoking fears about possible Democratic picks. Conservatives had for years viewed gaining commanding representation on the federal bench as critical to slowing the nation’s cultural transformation, and Trump has largely delivered, appointing more judges than Barack Obama or any other recent president.

Trump campaign spokesman Tim Murtaugh says, “Conservative judges were a huge issue in 2016 and will be again this November."

Marisa Franco, the Arizona-based cofounder of Mijente, a Latino organizing and activist political organization, said she sees the DACA decision -- and Trump’s response -- as “an opportunity for Biden” but that promising to send legislation to Congress isn’t enough.

“I think he can go further and he must go further to actually solve these problems,” Franco said. She said that federal agencies such as Immigration and Customs Enforcement “really parallel what we’re seeing in local police departments around the country. They are operating with blank checks with no accountability,” and Biden “needs to go in and he needs to clean house.”