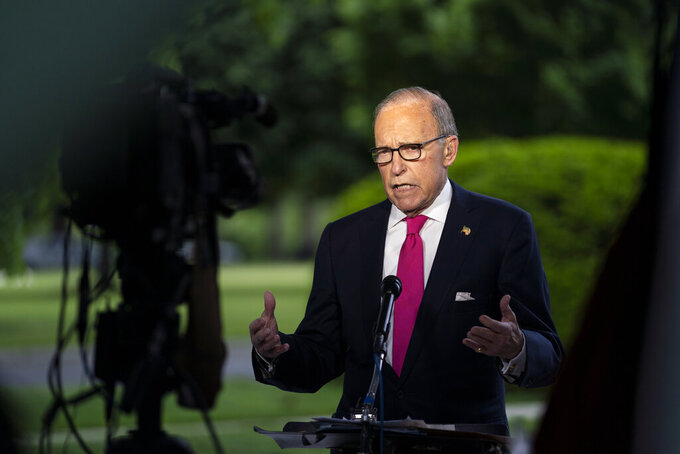 FILE - In this May 8, 2020, file photo White House chief economic adviser Larry Kudlow speaks during an interview on the unemployment numbers caused by the coronavirus, at the White House in Washington. Some of Trump’s top economic advisers emphasized on Sunday, May 10, the importance of states getting more businesses and offices open. (AP Photo/Evan Vucci, File)

WASHINGTON (AP) — The Trump administration has directed the U.S. federal employee retirement fund to scrap its plan to place more than $4 billion into Chinese investments, a move that comes as the president blames Beijing almost daily for not doing more to stop COVID-19 from spreading around the world.

The administration has given the board overseeing the Thrift Savings Plan until Wednesday to comply with the president's directive. TSP is a tax-deferred retirement savings and investment plan that works like a 401(k) plan offered by private corporations.

The letter warned that such investments present significant national security and humanitarian concerns because they operate in violation of U.S. sanction law and help China bolster its military and oppress religious minorities living in the country.

"The Federal Retirement Thrift Investment Board … is set to implement these plans during a time of mounting uncertainty concerning China’s relations with the rest of the world, including the possibility that future sanctions will result from the culpable actions of the Chinese government with respect to the global spread of the COVID-19 pandemic,” the letter said.

Scalia followed with a letter to the Federal Retirement Thrift Investment Board asking it to forgo its plan to move money into the Chinese equities.

In November 2017, the board selected a new benchmark index for investing a portion of its funds to one that contains equities from emerging markets, including China. The board evaluated that decision last year after a group of senators expressed concern that companies benefiting from this investment would “include those involved in military activity, espionage and human rights abuses by the Chinese government,” Scalia wrote.

The board declined to reverse its decision and the fund is expected to shortly invest up to $4.5 billion in Chinese equities. Scalia noted in his letter to the board that its members serve on expiring terms and that Trump last week nominated three replacements to the board.