Trump feels no need for crisis counsel from predecessors 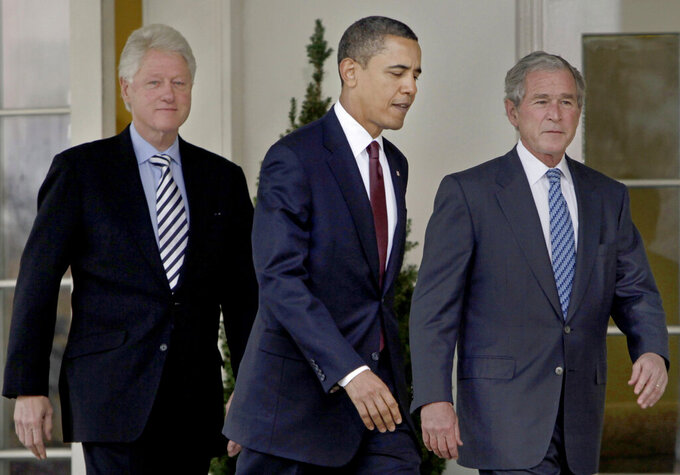 FILE - In this Jan. 16, 2010, file photo President Barack Obama, center, walks out of the Oval Office of the White House with former Presidents Bill Clinton, left, and George W. Bush, right, to deliver remarks in the Rose Garden at the White House in Washington. Obama sent Clinton and the younger Bush off on a fundraising effort for Haiti after a devastating earthquake in 2010. (AP Photo/Pablo Martinez Monsivais, File)

WASHINGTON (AP) — President George W. Bush turned to one of the world's most exclusive clubs for help raising money after an Indian Ocean tsunami killed more than 200,000 people in 2004.

He paired his father, George H.W. Bush, and the man who defeated him to win the presidency in 1992, Bill Clinton. It worked so well that he signed the duo up again after Hurricane Katrina ravaged New Orleans less than a year later.

President Barack Obama followed the same playbook and sent Clinton and the younger Bush off on a fundraising effort for Haiti after a devastating earthquake in 2010.

Not President Donald Trump, who has no plans to seek his predecessors' counsel during the coronavirus pandemic, a complex crisis with profound public health and economic consequences.

“No, not really. We're doing a great job,” Trump said recently when asked if he would contact any of the living former presidents.

Even in the face of the greatest challenge of his presidency, Trump has expressed confidence in his team, and said he didn't want to “bother” the former presidents. He added that he would reach out if he thought he could learn from them.

Instead, he has frequently criticized his predecessors, disparaging Obama's handling of the H1N1 virus pandemic of 2009-2010 that killed nearly 12,500 Americans, and George W. Bush's response to Hurricane Katrina in 2005, in which more than 1,800 people were killed, mostly in New Orleans.

“Look, I respect everybody, but I feel I have an incredible team and I think we’re doing an incredible job," Trump said at the White House. “So I don’t want to disturb them, bother them. I don’t think I’m going to learn much. I guess you could say that there’s probably a natural inclination not to call.”

That hasn't stopped Clinton, Bush and Obama from getting involved in their own ways.

Obama, who has been deliberate about keeping a low profile during Trump's presidency, has become more of a presence on social media during the pandemic. The Democrat has been posting health and safety tips from public officials, news reports and uplifting accounts of the ways Americans are coming together during the crisis.

His decision to share with his 115 million Twitter followers a recent Washington Post article about how viruses spread and can be slowed made it the newspaper's most-read story ever, spokeswoman Molly Gannon said in an email.

Obama on Thursday addressed leaders from more than 300 cities around the world who were discussing the pandemic at a New York event sponsored by former New York Mayor Mike Bloomberg's philanthropic organization. Obama encouraged the leaders to “speak the truth" and “speak it clearly” with compassion and empathy.

His comments appeared to carry an implicit criticism of Trump, who sought early on to minimize the severity of the outbreak.

Bush, a Republican, hosted a teleconference this month with more than 500 mayors and local leaders who are working to keep their communities from being overrun by the virus. He is also using the Bush Institute to highlight how people across the country are helping each other, Bush spokesman Freddy Ford said in an email.

Bush and former first lady Laura Bush are also social distancing “to the max” at their ranch in Crawford, Texas, Ford said.

Democrats Bill and Hillary Clinton recently sent hundreds of pizzas to hospitals in Westchester County, New York, where they live.

Michael Chertoff, homeland security secretary when Hurricane Katrina slammed the Gulf Coast, said Bush leaned on the former presidents because he “understood that presidents bring to the table a unique perspective that no other official has.”

Bush was widely faulted for a lackluster response to the unfolding disaster in New Orleans, which became a permanent blot on his two terms in office.

Chertoff, who commented at a recent event hosted by The Cipher Brief, an online intelligence newsletter, said presidents have to be the “ultimate decision-maker,” often relying on information that is fast-moving and changing.

"So I think getting the perspective of your predecessors is very helpful,” Chertoff said.

Presidents seeking help from those who came before them isn't a modern phenomenon.

In the late 1940s, Harry Truman put former President Herbert Hoover in charge of a commission charged with streamlining the executive branch of government.

John F. Kennedy sought feedback from former President Dwight D. Eisenhower, who had been an Army general, after the failed Bay of Pigs invasion of Cuba in 1961.

Jimmy Carter led a Clinton-sanctioned mission to North Korea in 1994.

“Former presidents are a rarity and they are a precious, valuable informed commodity,” Barbara Perry, director of presidential studies at the University of Virginia's Miller Center, said in an interview. And it's not only because they know issues, “but they also have the experience of being president.”

Trump was liberal in criticizing some of his predecessors, especially Obama, even before he took office. He has torn into Bush over the Iraq war, criticized Clinton's treatment of some women, and even tried to stoke the false notion that Obama was not born in the United States.

In office, Trump has routinely criticized or blamed Obama for things that go wrong, including aspects of the current pandemic.

Jeffrey Engel, director of the Center for Presidential History at Southern Methodist University in Dallas, said President George H.W. Bush kept his living predecessors briefed on issues big and small in case a situation arose where he would need to seek their counsel.

The fact that Trump doesn't “go outside of his own info bubble” to seek advice is perhaps among the biggest problems of his presidency, Engel said.