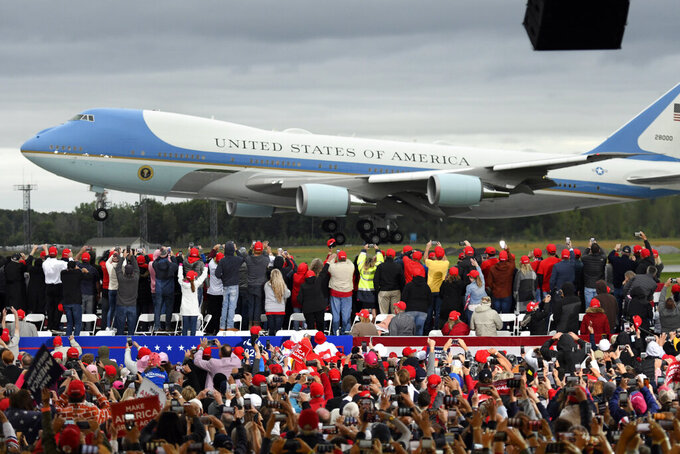 FREELAND, Mich. (AP) — Reeling from another crisis of his own making, President Donald Trump tried to refocus attention on his Democratic rival at a rally in battleground Michigan Thursday as he pushed to move past revelations that he purposefully played down the danger of the coronavirus last winter.

But the virus controversy followed him as he faced new pushback from local officials worried about the growing size of his rallies and his campaign's repeated flouting of public health guidelines intended to halt the COVID-19 spread. That includes Michigan’s Democratic Gov. Gretchen Whitmer, who raised alarms about Thursday’s event, warning it would make recovery harder.

Trump, however, reveled in the crowd of several thousand, packed shoulder-to-shoulder in a cavernous airport hangar, mostly without masks — with Air Force One on display as his backdrop.

“This is not the crowd of a person who comes in second place,” Trump declared to cheers as he railed against Whitmer for current state restrictions.

“Tell your governor to open up your state!” he demanded, saying Michigan would be better if it “had a governor who knew what the hell she was doing."

Before departing the White House, Trump denied he had lied to the nation as he continued to grapple with fallout from a new book by Washington Post journalist Bob Woodward. In a series of interviews with Woodward, the president spoke frankly about the dangers posed by the virus — even as he downplayed them publicly — and admitted he had tried to mislead the public.

“Donald Trump knew all along just how deadly this virus is,” Democratic presidential nominee Joe Biden said in a virtual fundraiser. “He knew and purposefully played it down because all he was concerned about was his reelection, didn’t want to affect economic growth.”

Trump, answering questions at the White House, insisted “there was no lie” in his often dismissive public comments and said he was only tying to project calm. He offered a similar explanation to his Michigan supporters while taking a potshot at Woodward and even comparing himself to Prime Minister Winston Churchill leading the British through Nazi bombings in World War II.

“This wack job that wrote the book, he said, ‘well Trump knew a little bit,'" Trump told the crowd. “They wanted me to come out and scream, ‘people are dying, we’re dying.’ No, no. We did it just the right way. We have to be calm. We don’t want to be crazed lunatics.”

But Trump seemed to have no issue leaning into fear at the rally. He lobbed several unsubstantiated accusations at Biden and Democrats, including charging that they want to shut down auto plants — despite the Obama administration's work to save the industry — and "delay" the production of a coronavirus vaccine. Biden, he claimed, would terminate travel bans Trump has implemented, overwhelming the state "with poorly vetted migrants from jihadist regions” and refugees “from terrorist hot spots around the world.”

And he continued his racially charged appeal to suburban voters who turned to Democrats during the 2018 midterms, warning that under a Biden administration, “far left lunatics” would be placed in charge of the federal government and courts and American suburbs would be destroyed.

“Does anyone want to have a member of antifa as a resident of your suburb? I don’t think so," Trump declared, telling his supporters, “Your vote will save America."

Trump has resumed an aggressive campaign schedule, despite the ongoing pandemic and amid growing resistance from local leaders who have expressed alarm at his insistence on holding large-scale rallies as Americans continue to get sick and die.

While the rallies so far have been held in open-air airport hangars, they have been drawing thousands of supporters despite local restrictions. And the majority of attendees, including in Michigan, have refused to wear masks, even when mandates are in place. Trump has characterized the rallies as “peaceful protests.”

This week, the state of Nevada became the first to scuttle his plans for rallies initially set for Las Vegas and Reno, after the Reno-Tahoe Airport Authority warned a company that planned to host 5,000 people at a private hangar it would be in violation of the governor’s restrictions banning gatherings of more than 50 people and the terms of the company’s lease for the hangar.

In Michigan, Gov. Whitmer did not try to stop the rally, but warned that such events “threaten all that sacrifice that we’ve made.”

“If the rallies are like those he’s held in recent days in other states, with lots of people close together without masks on projecting their voices, I’m concerned about it,” she said Thursday morning.

Michigan currently caps outdoor events at 100 people and mandates that attendees wear masks if they cannot consistently stay 6 feet away from people who are not part of their households. There is an exception, though, for outdoor expressive activities protected by the First Amendment. The governor's office said people still must maintain distance.

Michigan is a vital Electoral College battleground, which Trump won by only 10,704 votes in 2016, helping him breach the Democrats’ “blue wall." While Trump aides had all but written off the state earlier this summer, they now say they have seen a tightening. Democrats see optimism, too, having made major gains there in the 2018 midterms, winning every major statewide office and a handful of congressional seats as well.

Both candidates have been paying frequent visits, with Biden traveling to suburban Detroit on Wednesday to make a direct appeal to blue-collar workers who might have voted Republican four years ago but now regret it.

Trump on Thursday pushed back, accusing Biden of supporting trade deals and policies that led to U.S. job losses.

“Joe Biden devoted his career to offshoring Michigan’s jobs,” Trump said, drawing boos from the crowd. “Biden supported every disastrous globalist sellout for over a half a century.”

Michigan’s unemployment rate spiked at 24% in April, according to the Bureau of Labor Statistics. It has since recovered to 8.7%, but Michigan has nearly 414,500 fewer jobs than it did when Trump was inaugurated.