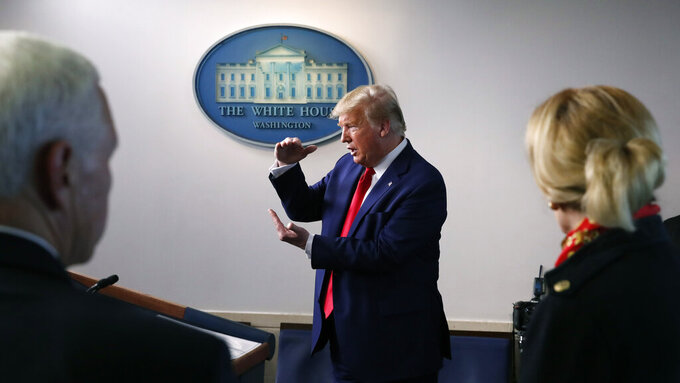 FILE - In this March 31, 2020, file photo President Donald Trump speaks about the coronavirus in the James Brady Press Briefing Room of the White House in Washington, as Vice President Mike Pence and Dr. Deborah Birx, White House coronavirus response coordinator, listen. Trump in recent days has grumbled that American companies such as 3M and GM are not doing enough to provide American medical workers and first responders with vital equipment they need. (AP Photo/Alex Brandon, File)

The coronavirus is projected to kill more than 100,000 Americans. It has effectively shuttered the economy, torpedoed the stock market and rewritten the rules of what used to be called normal life.

But in this moment of upheaval, Trump and his advisers haven’t lost sight of the opportunity to advance his agenda.

A look at some of the president's notable moves:

BRINGING BACK THE ENTERTAINMENT TAX DEDUCTION

Trump has called on Congress to revive the tax deduction for business-related expenses on meals and entertainment, arguing it would help bolster high-end restaurants hammered by the outbreak.

Trump’s own tax law in 2017 sliced the tax rate for corporations from 35% to 21% and eliminated the deduction.

“This is a great time to bring it back,” Trump said of the resurrecting the tax break. "Otherwise a lot of these restaurants are going to have a hard time reopening,” he said at White House briefing Wednesday.

During a Rose Garden briefing last Sunday, Trump said he had spoken with celebrity chef Wolfgang Puck about the idea. Trump also name-checked prominent restaurateurs including Thomas Keller, Daniel Boulud, and Jean-Georges Vongerichten as he tried to make the case for reviving the deduction. Vongerichten is a tenant at the president’s Trump International Hotel and Tower in New York.

“Congress must pass the old, and very strongly proven, deductibility by businesses on restaurants and entertainment,” Trump tweeted recently. “This will bring restaurants, and everything related, back - and stronger than ever. Move quickly, they will all be saved!”

Trump has repeatedly credited himself with moving in late January to bar entry from foreigners who had recently been in China.

The president later also ordered the temporary suspension of travel from much of Europe to the United States, and has largely closed the U.S. borders with Canada and Mexico.

But Trump has notably used the crisis to remind Americans about his 2016 campaign promise to build a wall along the U.S.-Mexico border. He argues a wall would help contain the coronavirus. In a tweet last month, he said the structure is “Going up fast” and “We need the Wall more than ever!”

Leading public health experts disagree. Robert Redfield, director of the Centers for Disease Control and Prevention, told lawmakers last month that he was unaware of any indication from his agency that physical barriers along America’s borders would help halt the spread of the coronavirus in the U.S.

Still, Trump argues that the virus has only spotlighted that his instincts on the border wall were right.

The virus — and the subsequent opportunity to invoke emergency powers — has allowed Trump to lock down the borders and make sure virtually no immigrants are getting in.

Trump in recent days has grumbled that American companies such as 3M and GM are not doing enough to provide American medical workers and first responders with vital equipment they need.

But the president and his aides have also made a broader argument about the need for the country to retool regulations to encourage the manufacturing of medicine and other key safety equipment on American soil.

Peter Navarro, a senior trade adviser to Trump, said the pandemic, which has left hospitals short of ventilators and protective masks, has underscored the president’s “buy American, secure borders, and a strong manufacturing base” philosophy.

“Never again should we have to depend on the rest of the world for our essential medicines and countermeasures,” Navarro said.

On the same day that the White House announced projections that 100,000 to 240,000 Americans are likely to die from coronavirus, the Environmental Protection Agency introduced a controversial new federal rule that will relax mileage standards for years to come.

The rollback is a victory for Americans who like their SUVs and pickup trucks, but it’s hardly without a cost. The government’s own projections indicate that the new standards also mean more Americans will die from air pollution, and there will be more climate-damaging tailpipe exhaust and more expense for drivers at the gas pumps.

Trump hailed the new rule as reason for Americans to go out and buy big, new cars.

Democratic lawmakers and environmental groups condemned the rollback, and years of legal battles are expected, including from California and other states opposed to the change.

KEEPING AN EYE ON OVERHAULING COURTS

Trump announced Friday he was nominating a young, federal judge to fill a high-profile vacancy on the U.S. Court of Appeals for the District of Columbia Circuit.

Judge Justin Walker, 37, was confirmed less than six months ago for a seat on the U.S. District Court in Western Kentucky after a contentious nominating fight about his credentials.

The former clerk to retired Supreme Court Justice Anthony Kennedy is one of the youngest federal judges in the country. He also has deep ties to Senate Majority Leader Mitch McConnell, a Kentucky Republican who hailed the nomination as an opportunity to "refresh the second-most-important federal court in the country.″ Walker also clerked for Justice Brett Kavanaugh when Kavanaugh was a judge on the D.C. appeals court.

Walker drew a rare “Not Qualified” rating from the American Bar Association when Trump nominated him last year to be a federal judge. Despite reservations from Democrats and the legal community about Walker’s credentials, his nomination was approved, 50—41. Opponents noted he was barely 10 years out of law school and had never served as co-counsel at trial when he was tapped for the federal bench.

The Trump administration has worked feverishly to overhaul the federal courts, nominating and winning Senate confirmation for more than 190 judges over the past three years, a pace unseen since Ronald Reagan was in the White House.

Even in the midst of battling a pandemic, Trump hasn’t lost sight of the long-term impact his nominations to the federal bench will have on his legacy.

This story has been corrected to reflect that the property in New York is the Trump International Hotel and Tower, not the Trump Tower.