Trump wishes Biden luck without naming him in farewell video 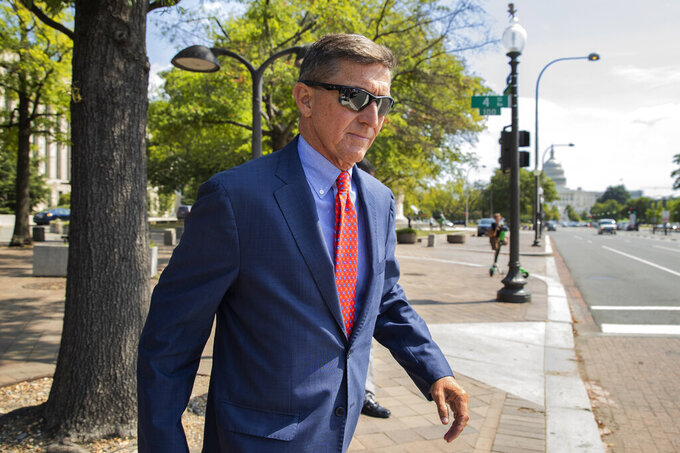 WASHINGTON (AP) — President Donald Trump offered rare, kind words to his successor in a farewell video, while failing to address him by name, as he spent his final full day in office preparing to issue a flurry of pardons in a near-deserted White House, surrounded by an extraordinary security presence outside.

“This week we inaugurate a new administration and pray for its success in keeping America safe and prosperous," Trump said in the video “farewell address," released by the White House Tuesday afternoon. “We extend our best wishes. And we also want them to have luck. A very important word.”

Trump, who spent months trying to delegitimize President-elect Joe Biden's win with baseless allegations of mass voter fraud, referenced the “next administration," but declined to utter Biden's name. Many of Trump's supporters continue to believe the election was stolen from him, even though a long list of judges, Republican state officials and even Trump's own government have said there is no evidence to support that claim.

Trump was also expected to spend his final hours granting clemency to as many as 100 people, according to two people briefed on the plans. The list of pardons and commutations is expected to include names unfamiliar to the American public — regular people who have spent years languishing in prison — as well as politically connected friends and allies like those he’s pardoned in the past.

Trump spent much of the address trumpeting what he sees as his top achievements, including efforts to normalize relations in the Middle East, the development of coronavirus vaccinations and the creation of a new Space Force.

“We did what we came here to do — and so much more,” he said in the nearly 20-minute address.

Trump has remained largely out of sight since his supporters stormed the Capitol building earlier this month, trying to halt the peaceful transfer of power. Aides had urged him to spend his final days in office participating in a series of legacy-burnishing events. But Trump, who remains consumed with anger and grievance over his election loss, largely refused. He has not been seen in public since last week, when he traveled to Texas for one last photo opportunity at the border wall he pushed so adamantly throughout his presidency. In the end, he spent less than 45 minutes on the ground there and spoke just 21 minutes.

Trump is set to leave Washington early Wednesday morning and has been planning a grand farewell event at nearby Joint Base Andrews. Once there, he will board Air Force One for a final time, flying to Florida and becoming the first outgoing president in more than a century to skip the inauguration of his successor.

Trump has also refused to take part in any of the symbolic passing-of-the-torch traditions that have been the capstones of the peaceful transition of power from one administration to the next. He is boycotting not just the ceremony at the Capitol, but also passed on inviting the Bidens to the White House for a get-to-know-you meeting. And it remains unclear whether he will write Biden a personal welcome letter, like the one he received from former President Obama when he moved in.

Denied his Twitter bullhorn and with little else planned, Trump did participate in multiple meetings over the long weekend to discuss pending clemency actions, according to a White House official, who, like others, spoke on condition of anonymity because the action had yet to be made public.

Trump was personally involved in the effort to sift through requests, mostly from first-time drug offenders sentenced to life, rejecting some applications and greenlighting others, according to one of the people involved in the effort. Also playing a key role has been the president's daughter, Ivanka Trump, who personally met with advocates, reviewed cases and brought them to the Department of Justice and pardon attorney.

Jessica Jackson, a lawyer and criminal justice advocate who has been working with the administration, said that she came to Ivanka Trump with the case of Darrell Frazier, who has served more than 29 years of a life sentence with no parole for his role in a drug conspiracy. While incarcerated, he founded a non-profit foundation in Tennessee that teaches tennis to 100-200 kids a week.

Trump had been expected to move forward with additional pardons and commutations earlier this month, but discussions were put on hold after the insurrection at the Capitol by pro-Trump rioters incited by the president's fiery and baseless election challenges. That threw an already paralyzed White House into even further chaos.

Trump has since been impeached for a second time and a sense of wariness has set in, with the president's inner circle fearful of doing anything that could provoke a conviction in the Senate that would potentially bar him from ever holding office again.

That would curtail any chance of a 2024 comeback run that Trump had hoped would at least stoke the rumors of a campaign to remain relevant and a GOP kingmaker. Trump aides nervously watched Senate Majority Leader Mitch McConnell's Tuesday denunciation of the president's words that incited the riot; if McConnell, who has not signaled how he will vote in the trial, opts to convict, enough Republicans may follow suit to oust Trump, who does not have his Twitter account to keep his adopted party in line.

A long list of Trump staffers have already packed their offices and departed the White House, leaving the West Wing deserted — a warren of empty offices and bare walls — surrounded by an unprecedented security apparatus with National Guard troops, military vehicles and checkpoints aimed at staving off further violence.

As advocates and prisoners await Trump's clemency decisions, it remains unclear whether Trump will pardon Steve Bannon, his former top strategist, or offer pre-emptive reprieves to his attorney, Rudy Giuliani, his adult children and or even himself — uncharted legal territory.

Bannon has been charged with duping thousands of investors who believed their money would be used to fulfill Trump's chief campaign promise to build a wall along the southern border. Instead, Bannon is charged with diverting over a million dollars, paying a salary to one campaign official and personal expenses for himself.

Giuliani said on his Sunday radio show that, while he fears that prosecutors might “try to frame me,” he is ”willing to run that risk."

“I do not need a pardon. I don’t commit crimes," he said.

Republican Sen. Lindsey Graham of South Carolina, who speaks often with Trump, said on Fox's Sunday Morning Futures that there are also “a lot of people” urging the president to pardon those who participated in the storming of the Capitol building — pleas he urged the president to swiftly reject.

“I don’t care if you went there and spread flowers on the floor, you breached the security of the Capitol, you interrupted a joint session of Congress, you tried to intimidate us all. You should be prosecuted to the fullest extent of the law and to seek a pardon of these people would be wrong,” he said. He warned that such a move “would destroy President Trump and I hope we don’t go down that road.”

In addition to the bold-faced names, Trump's list is expected to include people whose cases have been championed by criminal justice reform advocates. They are people like Chris Young, who was sentenced to life in prison for drug possession because of federal sentencing minimums and whose case has been championed by reality TV star Kim Kardashian West.

"Our nation is not well served by spending millions of taxpayer dollars burying people alive under outdated federal drug laws,” said his attorney, Brittany K. Barnett, who is co-founder of the Buried Alive Project, a criminal justice reform advocacy group.

Trump has already pardoned a number of longtime associates and supporters, including his former campaign chairman, Paul Manafort; the father of his son-in-law, Charles Kushner; his longtime friend and adviser Roger Stone and his former national security adviser Michael Flynn.