Trump's leadership is tested in time of fear, pandemic 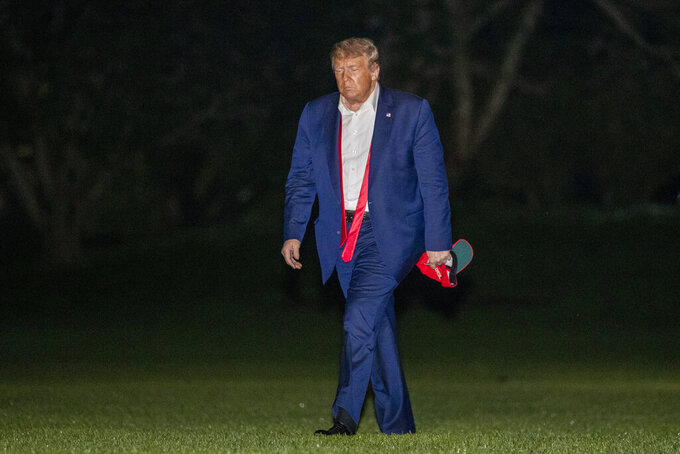 FILE - In this June 21, 2020, file photo, President Donald Trump walks on the South Lawn of the White House in Washington, after stepping off Marine One as he returns from a campaign rally in Tulsa, Okla. (AP Photo/Patrick Semansky, File)

WASHINGTON (AP) — Not long after noon on Feb. 6, President Donald Trump strode into the ornate East Room of the White House. The night before, his impeachment trial had ended with acquittal in the Republican-controlled Senate. It was time to gloat and settle scores.

“It was evil," Trump said of the attempt to upend his presidency. “It was corrupt. It was dirty cops. It was leakers and liars.”

It was also soon forgotten. Also Feb 6 in California, a 57-year-old woman was found dead in her home of natural causes then unknown. When her autopsy report came out, officials said her death had been the first from COVID-19 in the U.S.

The “invisible enemy” was on the move. And civil unrest over racial injustice would soon claw at the country. And in a fresh round of angst over Russia, America would ask whether Trump had the backs of troops targeted by bounty hunters in Afghanistan or whether they were forsaken by their commander in chief.

For Trump, the virus has been the most persistent of those problems. But he has not tried to make a common health crisis the subject of national common ground and serious purpose. He has refused to wear a mask and set off a culture war in the process as his followers took their cues from him.

Instead he spoke about preening with a mask when the cameras were off: "I had a mask on," he said this past week. "I sort of liked the way I looked ... like the Lone Ranger.”

Yet these are times of pain, mass death, fear and deprivation, and the Trump show may have lost its allure, exposing the empty space once filled by the empathy and seriousness of presidents leading in crises.

Angry and scornful at every turn, Trump used the totems of Mount Rushmore as his backdrop to play on the country’s racial divisions, denouncing the “bad, evil people” behind protests for racial justice. He then made a steamy Fourth of July salute to America on the White House South Lawn his platform to assail “the radical left, the anarchists, the agitators, the looters,” and, for good measure, people with “absolutely no clue.”

“If he could change, he would," said Cal Jillson, a presidential scholar at Southern Methodist University in Dallas. "It's not helping him now. It’s just nonstop. It is habitual and incurable. He is who he is.”

Over three years Trump exhausted much of the country, while exhilarating some of it, with his constant brawls, invented realities, outlier ways and pop-up dramas of his own making. Into summer, one could wonder whether Trump had finally exhausted even himself.

Vainglorious always, Trump recently let down that front long enough to ponder the possibility that he would lose in November, not from the fabricated voting shenanigans he likes to warn about but simply because the country may not want him after all of this.

Ten current and former officials of the White House and Trump campaign spoke to The Associated Press about Trump behind the scenes in these fraught months. They requested anonymity to speak candidly for this story.

Some described a president being forced to set aside the campaign he wanted to run for the fall — and lashing out at those around him as the virus hit the economy and complicated his political prospects.

When the stock market took a dive during his late February trip to India, the officials said, Trump was up most of the night on the phone with advisers, peppering them with questions about the economic fallout of the outbreak while fighting jet lag.

When the markets fell again the next day, creating their biggest two-day slide in four years, Trump was in a rage coming back on Air Force One, the officials said, barely sleeping during the more than a dozen hours in the air.

Landing early in the morning Feb. 26, he quickly tore into aides about Nancy Messonnier, director of the National Center for Immunization and Respiratory Diseases, who had publicly predicted that the virus’ impact would be severe.

In many ways it was already too late to pretend otherwise, not that Trump stopped trying.

So often during his term, Trump had managed to corral or shape a crisis by the force of his bluster. But the virus doesn’t have a Twitter account, and the president’s erratic response to a pandemic that has killed about 130,000 Americans has come with sinking poll numbers. To some political observers, he is a leader out of his element.

“Trump was elected to burn down the system and entertain,” said Eric Dezenhall, a crisis-management consultant who has followed Trump’s career.

“When things get terrible, people don’t want a leader to burn down the system and entertain. We actually want a system. And you can't bully a disease, which has been his one maneuver for 74 years.”

Deputy White House press secretary Sarah Matthews said Trump mounted a “whole-of-America response to this pandemic” that let states decide when and how to reopen and ensures “the federal government will be there to support states if needed.”

Trump’s instinct, his ability to read a moment, had long been his strength as a politician. But from his hard-line response to protests to his increasingly lonely defense of Confederate monuments, he appeared out of step even with many Republicans on matters of race as well as in denial about the ravages of COVID-19.

"In a crisis, when you lack an operational solution, all you are left with is humanity,” Dezenhall said. “This is just a situation where Trump cannot pivot because he views empathy as the equivalent of running down Pennsylvania Avenue in high heels and a tutu.”