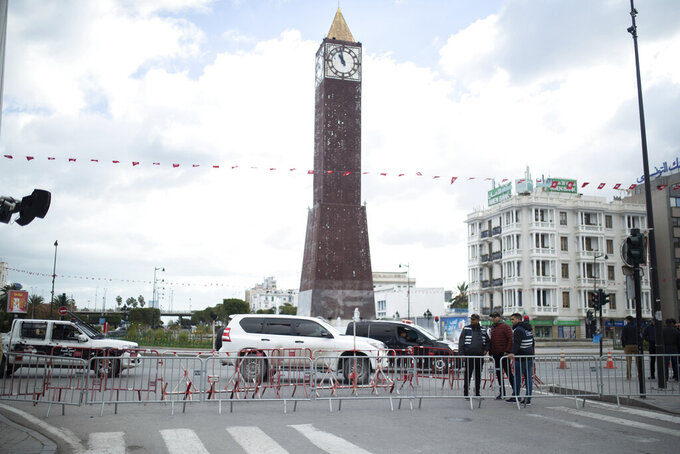 Security forces stand guard in Tunis' landmark Avenue Habib Bourgiba, where massive protests took place in 2011, on the tenth anniversary of the uprising, during a national lockdown after a surge in COVID-19 cases, in Tunis, Thursday, Jan. 14, 2021. Tunisia is commemorating the 10th anniversary since the flight into exile of its iron-fisted leader, Zine El Abidine Ben Ali, pushed from power in a popular revolt that foreshadowed the so-called Arab Spring. But there will be no festive celebrations Thursday marking the revolution in this North African nation, ordered into lockdown to contain the coronavirus. (AP Photo/Mosa'ab Elshamy) 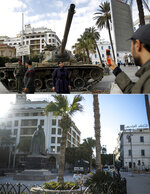 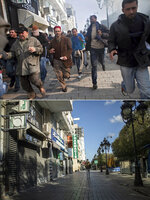 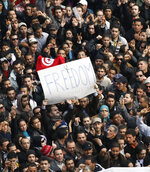 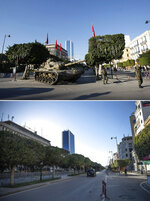 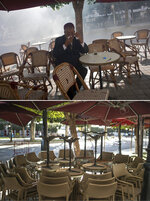 TUNIS, Tunisia (AP) — Tunisia on Thursday commemorated the 10th anniversary since the flight into exile of iron-fisted President Zine El Abidine Ben Ali, who was pushed from power in a popular revolt that foreshadowed pro-democracy uprisings, strife and civil war in the region during what became known as the Arab Spring.

But there were no festive celebrations marking the revolution in Tunisia. The North African nation's government imposed a four-day lockdown starting Thursday to contain the coronavirus,. banning demonstrations.

The tree-lined Avenue Bourguiba, the main artery in the capital city of Tunis that became a center of the 2011 revolt, uprising, was deserted except for a lone citizen standing in front of the once-dreaded Interior Ministry. Police set up checkpoints around the city center, where officers inspected the documents of pedestrians and vehicles and turned some around.

“After the political lockdown, it’s the turn of the health lockdown,” shopkeeper Ahmed Hassen said before the anniversary, adding with a smile that the situation looked like “the revenge of Ben Ali.”

Ben Ali ruled for 23 years over a system that instilled fear in many Tunisians, stifling free press, free speech and other liberties. He fled to Saudi Arabia on Jan. 14, 2011, amid a snowballing rebellion marked by violence, rampant pillaging and incessant calls to “get out.”

About a dozen people suffering from permanent injuries and are seeking official recognition and compensation as victims of the revolution tried to march onto Avenue Bourghiba, but police pushed them back.

U.N. Secretary-General Antonio Guterres congratulated the Tunisian people and their leaders on the 10th anniversary, pointing to “significant progress in consolidating democracy and promoting socioeconomic development” over the past decade, U.N. spokesman Stephane Dujarric said.

Some citizens questioned the timing of the four-day lockdown.

“Do you know why they did this quarantine and curfew? Because the situation is very tense and has nothing to do with the health situation,” said a man in a market identifying himself only as Rami. He suggested, like some others, that authorities fear “perhaps (people) will revolt in light of the situation.”

The revolution was unwittingly sparked by a desperate act of a 26-year-old fruit seller, Mohammed Bouazizi, who set himself ablaze on Dec. 17, 2010, to protest police humiliation in a town in Tunisia's neglected interior of the nation. Sidi Bouzid's death unleashed simmering discontent and mass demonstrations against poverty, joblessness and repression.

In Tunisia, joy and revenge marked the start of the post-Ben Ali era. Protesters tore down the omnipresent posters of Ben Ali and invaded the luxurious home of the president’s brother-in-law, Belhassen Trabelsi. The Tunis train station was burned down, tear gas flooded Avenue Bourguiba and other neighborhoods of the capital, and helicopter gunships flew low over the city. More than 300 people were killed.

Nevertheless, the chaos was contained. A budding democracy grew out of the aftermath.

U.S. Secretary of State Mike Pompeo said in a congratulatory statement Thursday that Tunisia stands as “an example of an inclusive democracy” with rights “constitutionally respected.” The U.S, “views Tunisia as a partner of choice."

Despite gains, a pall of disenchantment hangs over the country, marked by extremist attacks, political infighting, a troubled economy and promises unfulfilled, including development of the interior.

Despite guaranteed rights, numerous democratic elections, protests flourish, especially in the central and southern regions where the jobless rate among youth reaches 30% and the poverty level is above 20%. According to the Tunisian Forum of Economic and Social Rights, more than 1,000 demonstrations were counted in November alone. Months of sit-ins paralyzed oil and phosphate production, a key resource, for months, putting holes of billions of dollars in the budget.

The Tunisia of today “joins advanced countries” as far as democracy is concerned, said Najib Chebbi, founder of the Progressist Democratic Party, the main political opposition under Ben Ali.

“The Tunisian people have political rights, but are still waiting for their demands for dignity and work to be fulfilled,” he said, alluding to the revolutionary slogan of demonstrators crying out, “freedom, jobs and dignity.”

Analyst Slaheddine Jourchi said that what has been accomplished in the 10 years since the revolution “is far from answering the population’s demands, especially expectations of youth — the backbone of the revolution.”

“The revolution needs a deep evaluation,” he said.

For Chebbi, the opposition leader of the past, “Tunisia sits on a volcano and risks going off the rails.”