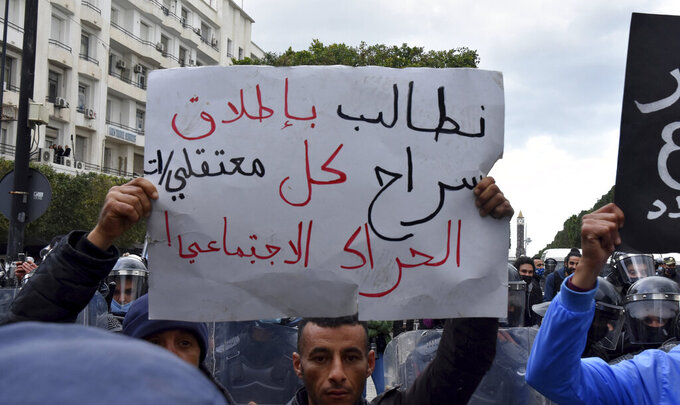 A demonstrator holds a poster reading "We demand the release of those arrested during the social crisis" during a demonstration in Tunis, Saturday, Jan.23, 2021. Tunisia is extending its virus curfew and banning demonstrations as it tries to stem a rapid rise in infections and calm tensions after a week of protests and rioting over economic troubles. New clashes between protesters and police broke out Saturday hours after the new virus restrictions were announced. (AP Photo/Hedi Ayari)

TUNIS, Tunisia (AP) — Hundreds of Tunisians protested out outside their country's heavily guarded parliament Tuesday as lawmakers prepared to vote late into the night on a new government after a week of youth protests and riots over poverty and a lack of jobs that left one young demonstrator dead and hundreds jailed.

Prime Minister Hichem Mechichi announced a government reshuffle last week in the midst of the unrest. He promised Tuesday that the new team would concentrate on deep reforms to create jobs and improve living conditions in the North African country, which has been mired in economic crisis deepened by the coronavirus pandemic.

But four of his 11 proposed new Cabinet members are facing investigations or suspicions of corruption, which threatens to further undermine Tunisians’ faith in a leadership accused of failing to live up to the promises of the country’s democratic revolution 10 years ago that unleashed the Arab Spring.

Security was so tight in the streets around the parliament building that several lawmakers were unable to access the grounds, according to independent parliamentary deputy Mabrouk Korchid. Security forces drove arriving demonstrators back some 500 meters (yards) from the vicinity of the building.

More than two dozen human rights organizations and other groups marched Tuesday afternoon through central Tunis to the parliament building to demand the release of hundreds of people who were arrested in this month’s unrest and to denounce repressive measures by police.

A protester in his 20s died in a hospital Monday, becoming the first apparent fatality amid the unrest. The young man's death produced a new outpouring of anger in his hometown of Sbeitla that the army was sent in to quell. His family said he was hit in the head by a tear gas canister during a protest, the state news agency reported. The Interior Ministry said an investigation has been opened.

During the parliamentary debate on the new Cabinet, legislator Ali Hermassi denounced the failure of four successive governments to improve the economy, noting that unemployment has risen, as has inflation, while investment has fallen. He also deplored the handling of the recent protests.

“The country needs political and social stability to emerge from the crisis,” he said.

The head of one faction, Souhair Maghzaoui, told the prime minister: “If you intend to return to police repression, you are deluding yourself,” referring to heavy-handed tactics under the authoritarian regime thrown out by Tunisia’s 2010-2011 uprising.

Meanwhile, President Kais Saied insisted the government reshuffle is unconstitutional because the prime minister didn’t follow the procedures for informing the president first.

“The Presidency of the Republic is not a mailbox that signs decrees and organizes oath-taking ceremonies,” Saied said during a security council meeting. He also questioned the wisdom of naming the four proposed ministers who are suspected of conflict of interest or embezzlement.

I-Watch, the Tunisian arm of anti-corruption group Transparency International, sent a letter to lawmakers urging them not to approve the four proposed ministers.

The president also criticized the reduction of the number of women in the new government from six to four. “Women are not cosmetic powder” but crucial players in the government, he argued.

The confidence vote was scheduled for the end of the day, with lawmakers voting on the new members of the government one-by-one.