Turkish teams on mission to persuade the vaccine-reluctant 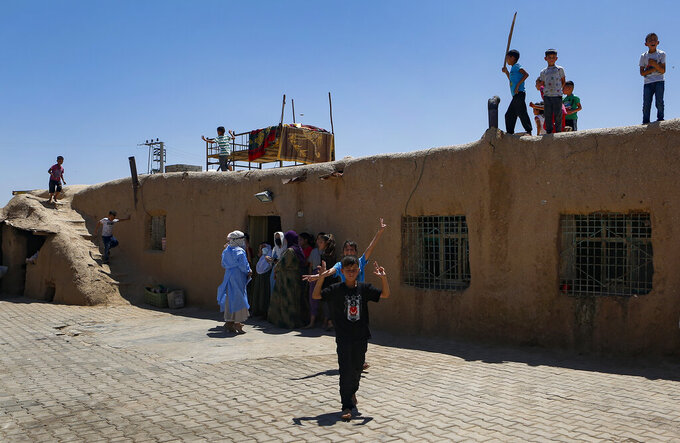 Nurse Meltem Gulcan, center left, talks to local residents about the importance of anti COVID-19 vaccination, in the village of Gokce, in the district of Mardin, a culturally and historically diverse region in Turkey's south, overlooking Mesopotamia and bordering Syria, Friday, May 21, 2021. The health worker is part of Turkey's 'vaccination persuasion' teams, a recent initiative that aims to promote inoculation against the coronavirus among the country's most vulnerable population. (AP Photo/Mehmet Guzel)

MARDIN, Turkey (AP) — In the medieval Turkish city of Mardin, Medine Ereli calls out to a team of medical workers walking along the town’s cobblestoned main street. Her 59-year old husband refuses to get vaccinated, she tells the doctor and nurse, before leading them to Enver Ereli, who’s on the job as a municipal sanitation worker.

The masked health care duo is part of Turkey’s “vaccination persuasion” teams, a recent initiative that aims to promote inoculation against the coronavirus among the country’s most vulnerable population.

Their job is to persuade people who fall in the age groups eligible for the vaccine, but who have so far been reluctant to get their shots.

At the start of the inoculation program, some elderly people mistrusted the vaccine amid rumors that it was part of a plot to kill off the older population, said Dr. Aysegul Duyan, who is out on the road with nurse Meltem Gulcan.

“They soon saw that that was not the case,” she said. “Nowadays, they are mostly worried due to rumors that it could cause paralysis.”

The mobile door-to-door units — equipped with coolers carrying vaccine vials — have been operational in several Turkish provinces since April. At local health offices, more government workers reach people by phone in an attempt to change their minds.

Health Minister Fahrettin Koca says 84% of the population age 65 and above who are eligible to be vaccinated have so far received COVID-19 shots. The government aims to bring that figure above 90%.

In Mardin, the team talked Ereli into getting his shot and the nurse administered the first jab while he sat down on a nearby ledge.

“I was afraid of getting sick and of being paralyzed. But then the medical teams told me it was for my benefit and I believed them and got vaccinated,” Ereli said.

It was the team’s first successful effort of the day as an Associated Press camera accompanied them around Mardin, a culturally and historically diverse region in Turkey’s south, overlooking Mesopotamia and bordering Syria.

In Mardin alone, their efforts have resulted in the vaccination of nearly 8,000 people, according to the provincial health director.

“Village by village, hamlet by hamlet, wherever they are, we went and talked to them either face to face or by phone and persuaded them,” Dr. Saffet Yavuz said.

Sare Oncel, a 75-year-old resident of the village of Gokce, about 30 kilometers (20 miles) from Mardin was also among those nudged into getting the shot.

“Everyone kept telling me that I’d be paralyzed and die if I got the vaccine. So I refused and didn’t get it,” she said. “But the government sent us the doctors and they talked us into it and I got vaccinated.”

Turkey has fully vaccinated around 14% of its population of 83 million. Around 16 million people have received their first jab.

Last week, the number of daily COVID-19 infections in Turkey dropped to below 10,000 for the first time since March 1, after reaching a record-high of more than 63,000 daily cases in mid-April.

On Tuesday, the Health Ministry posted 9,375 new cases and 175 deaths in the past 24 hours. The total death toll in the country stands at 46,621, with more than 5.2 million infections since the start of the outbreak.

Ayse Wieting in Istanbul, and Suzan Fraser in Ankara, contributed to this report.