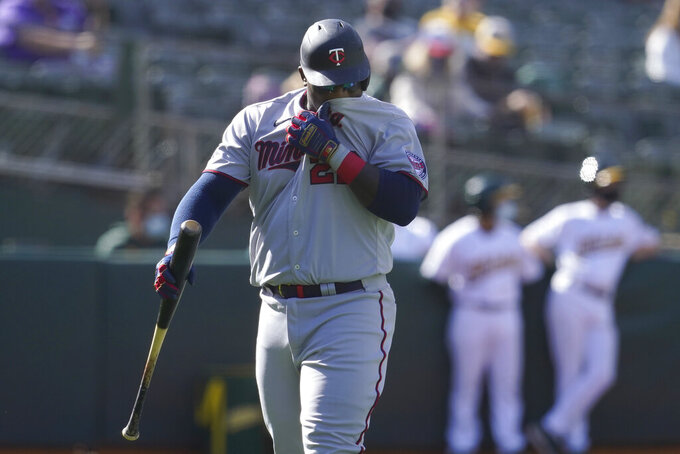 Minnesota Twins' Miguel Sano walks to the dugout after striking out against the Oakland Athletics during the fourth inning of the first baseball game of a doubleheader in Oakland, Calif., Tuesday, April 20, 2021. (AP Photo/Jeff Chiu)

Kirilloff, one of baseball's top prospects who made his debut in the playoffs last year, can also play first base. Lin signed with the organization before this season. He has played in 101 career games, all with Boston. He’ll be the first Taiwan-born player in Twins history.

Gordon was another one of the club's past first-round draft picks, going fifth overall in 2014 ahead of Aaron Nola, Michael Conforto and Trea Turner. The son of former major league pitcher Tom Gordon, he has yet to appear in the major leagues.

His rise through the system hit some snags, starting in 2018 when he was diagnosed with gastritis, or stomach inflammation. Other injuries came in 2019. Then he caught COVID-19 in 2020, right before teams reconvened for summer camp following the pandemic pause.

The call from Triple-A manager and alternate training site supervisor Toby Gardenhire took Gordon by surprise, as he walked with his sister to Target to buy ingredients for dinner.

“He was like, ‘Hey, we’ve got something important to tell you.’ I was like, ‘Oh, man. I hope I didn’t do anything wrong.’ He was just like, ‘No, you’re going to the big leagues,'" Gordon said. “It was crazy. I needed a moment. It was just a lot of feelings, just knowing that I’ve been through a lot.”