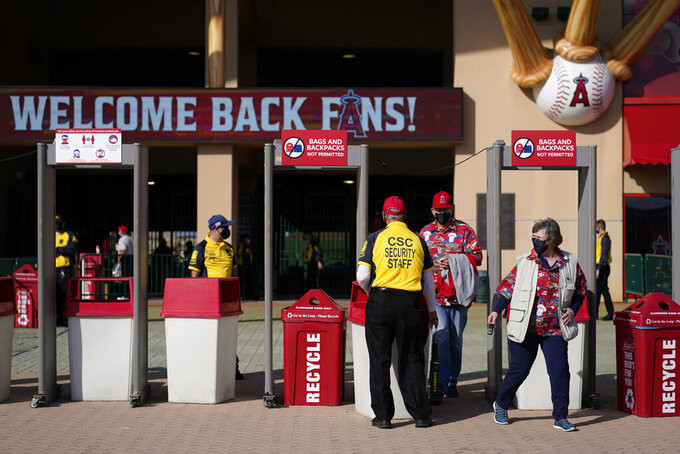 A security guard moves a barrier to allow fans to leave Angel Stadium when a baseball game between the Minnesota Twins and the Los Angeles Angels was postponed Saturday, April 17, 2021, in Anaheim, Calif. MLB said the game was postponed to allow for continued COVID-19 testing and contact tracing involving members of the Twins organization. (AP Photo/Ashley Landis)

OAKLAND, Calif. (AP) — The game between Minnesota and the Oakland Athletics scheduled for Monday night at the Coliseum has been postponed because of the Twins’ continued COVID-19 problems.

Major League Baseball made the announcement Sunday and said the delay will allow for continued virus testing and contact tracing. MLB said the Twins and A’s are tentatively scheduled for a straight doubleheader Tuesday as a makeup.

Games between the Twins and the Los Angeles Angels in Anaheim were postponed Saturday and Sunday.

Garlick played in the Twins’ 10-3 loss to the Angels on Friday night. The Twins aren’t scheduled to visit Angel Stadium again this season, and the Angels play four games at Minnesota on July 22-25.

There have been six MLB games postponed this year because of the virus, including a season-opening, three-game series between the Nationals and Mets after Washington's coronavirus concerns.