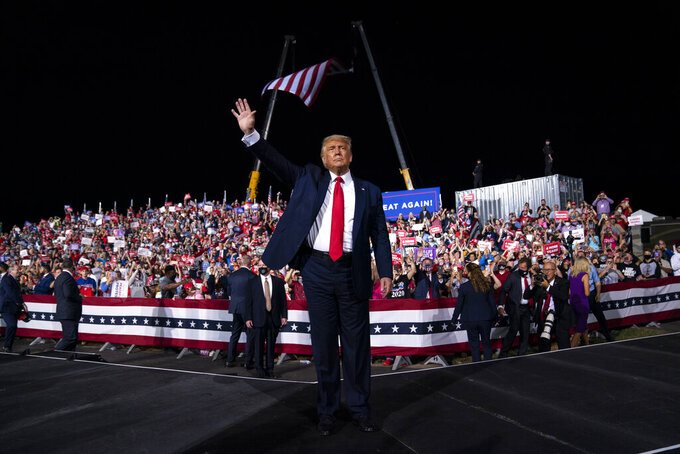 President Donald Trump waves to the crowd as he walks off stage after speaking at a campaign rally at Gastonia Municipal Airport, Wednesday, Oct. 21, 2020, in Gastonia, N.C. (AP Photo/Evan Vucci)

RALEIGH, N.C. (AP) — Two people who attended President Donald Trump's rally last week in Gastonia, North Carolina, have tested positive for the coronavirus, according to an announcement from the Gaston County Department of Health and Human Services on Thursday.

“These cases are not thought to be an indication of spread from the rally at this time, but rather two independent cases among individuals who were in attendance,” the department said in a statement.

The county health department recommends anyone who attended the president’s Oct. 21 rally to assess their own risk, monitor for symptoms and get tested if necessary.

It said it has contacted other locations the two individuals have been to and is working to notify close contacts of the infected rallygoers. The information is being publicly released because the department is unable to directly inform the thousands of attendees.

“Because of the large number of potential contacts from the rally, and the inability to alert them directly, the community is being notified so they can assess their own risk and take appropriate actions,” the department wrote.

The news comes days before the Nov. 3 presidential election. North Carolina is a key battleground Trump needs to win to boost his prospects of defeating Democratic nominee Joe Biden.

Trump's campaign has fought aggressively to win the state by bringing several of Trump's family members and the president himself to the state for repeated visits.

Trump was scheduled to hold a rally in Fayetteville on Thursday night alongside First Lady Melania Trump. The campaign announced Thursday afternoon it would be postponed until Monday “because of a wind advisory issued with gusts reaching 50 miles per hour and other weather conditions.”

Vice President Mike Pence held a rally in Greensboro on Tuesday. Tiffany Trump spoke in Charlotte on Tuesday, followed by Ivanka Trump the next day. Eric and Donald Trump Jr. have also frequented the state this month with campaign appearances.

The Trump campaign declined to comment. Event volunteers have increasingly handed out face masks, though the campaign has not mandated rallygoers wear them.

North Carolina Democratic Gov. Roy Cooper earlier this year required people to wear masks and has required people to maintain physical separation from one another at mass gatherings. The mild-mannered governor who is seeking reelection and has been reluctant to criticize Trump by name carved out a First Amendment exemption in an executive order that allows for “activities constituting the exercise of First Amendment rights.”

Trump has utilized the exception to hold large rallies, and Cooper has struggled to get local police departments to comply with his public health directives.

Cooper and Mandy Cohen, secretary of North Carolina’s Department of Health and Human Services, did not say during a Wednesday news conference whether any positive coronavirus cases have emerged as a result of Trump’s rallies.

The department confirmed on Thursday afternoon it is not aware of any other cases associated with rallies held by Trump.

The state has struggled to get infected residents to respond to calls from contact tracers. Even when people do respond and answer all questions, Cooper said it can still be difficult to pinpoint an exact location where they became infected. Still, he indirectly criticized the president for holding big events with few masks and little physical distancing in the middle of a pandemic.

“There is no way that large gatherings over long periods of time with people standing together ... helps things,” Cooper said.

Shortly after the news conference, the state linked a positive coronavirus case to a rally hosted by Cooper's Republican gubernatorial challenger, Lt. Gov. Dan Forest. The state public health department said a person who attended a rally in Burnsville on Oct. 15 tested positive. This aligns with the timing and location of an event hosted by local Republicans that Forest participated in.

“President Trump shows disrespect for the health of his own supporters — and the health of all North Carolinians — by continuing to hold superspreader rallies that ignore public health guidelines around social distancing and face masks," Humes said. "More than 4,200 North Carolinians have died due to COVID-19 and cases are on the rise, and yet he is continuing to put families across our state in danger.”