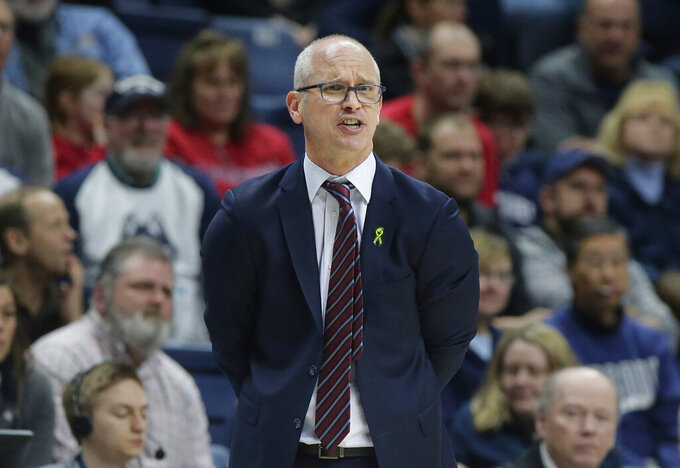 FILE - In this March 3, 2019, file photo, Connecticut coach Dan Hurley shouts from the bench during the second half of the team's NCAA college basketball game against South Florida in Storrs, Conn. Hurley said on Thursday, Nov. 12, 2020, that he is considering delaying the start of his team's season after a player's positive coronavirus test the week before that forced the program to suspend all activities for two weeks. (AP Photo/Steven Senne, File)

Hurley said Thursday that he hopes the team will be able to get back to practice on Nov. 19 and play its first games on Nov. 25 and Nov. 27.

But contracts for those games have not been signed. Hurley said ramping up practice after two weeks off will be difficult and he won't put his team's health in jeopardy to open the season this month.

“Missing two weeks of practice takes weeks to recover from,” Hurley said. “We’re very concerned about the welfare of our guys upon returning, how hard to push them in practice, do we need to adjust our nonconference schedule based on where we are at right now.”

UConn has not identified who tested positive for the coronavirus and Hurley would not go into specifics about the testing of the team and the current health of players.

Players currently are allowed to work out in the team's practice facility alone or with a roommate but with restrictions such as using just one basketball.

UConn is scheduled to play in the Legend's Classic during the first week of December at the Mohegan Sun in Uncasville. But Hurley said his priority is making sure the team can play its Big East Conference season. The Huskies are scheduled to return to the league after seven years in the American Athletic Conference when they host St. John's on Dec. 11.

Hurley said he's hoping the program can better control the virus threat once students leave campus later this month and the players are in more of a “bubble” environment. UConn will switch to remote learning for the remainder of the semester once the Thanksgiving break is over.

“We’ve got to make decisions with scheduling based on what’s in the best interest of our players and their welfare physically,” he said. “I think everything is on the table for us right now.”