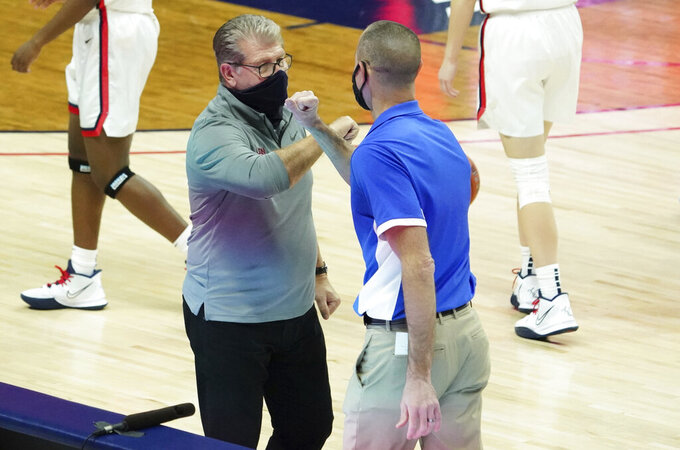 STORRS, Conn. (AP) — UConn women’s basketball coach Geno Auriemma says playing an NCAA Tournament this year, at least on the men's side, is a fiscal necessity for most schools.

The Hall of Famer was responding Monday to comments by Baylor coach Kim Mulkey, who said she believes the college basketball season will continue despite the COVID-19 pandemic because of “the almighty dollar.”

Auriemma said Mulkey is right, but he added he believes most players, coaches and school administrators also are in favor of completing the season.

Several schools, including Duke, Virginia and Vanderbilt, have brought their women’s seasons to an early end, citing concerns over the coronavirus pandemic and the mental stress that comes with all the restrictions and testing teams must follow.

But Mulkey made headlines when she said Saturday night that the NCAA was continuing to have teams play because it was putting money first.

Auriemma agreed but pointed out that most schools can’t afford for the season to end.

“Maybe it’s easy if you’re at a Power Five football school and you’re making millions and millions and millions of dollars,” Auriemma said. “That’s great. But 90% of the schools in America are not in that situation. So it is about the money. And again, that’s just the reality of it.”

No. 4 UConn, which is scheduled to face Butler on Tuesday and Tennessee on Thursday, has been able to play just seven games so far this season because of coronavirus-related issues.