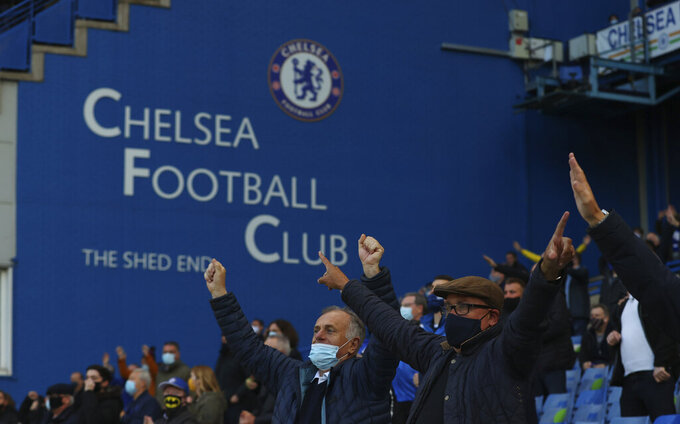 Fans support their team before the English Premier League soccer match between Chelsea and Leicester City at Stamford Bridge Stadium in London, Tuesday, May 18, 2021. (Catherine Ivill/Pool via AP)

NYON, Switzerland (AP) — With only four days to go before the Champions League final in Portugal, UEFA put 1,700 tickets on sale Tuesday for fans worldwide for the game between Manchester City and Chelsea.

The Estádio do Dragão in Porto will be one-third full with up to 16,500 spectators for Saturday's game. It was moved from Istanbul because of current travel limits in Turkey amid the coronavirus pandemic.

Man City and Chelsea each had an allocation of 6,000 seats to sell to their fans.

UEFA gave two options for spectators to get into the stadium — a negative PCR test dating no earlier than Wednesday or a negative antigen test result from Friday or Saturday.

Border controls in Portugal will also apply to countries where fans have traveled from, UEFA said.

Portugal is hosting the final instead of Istanbul for the second straight year. Last August, Bayern Munich beat Paris Saint-Germain 1-0 in Lisbon.