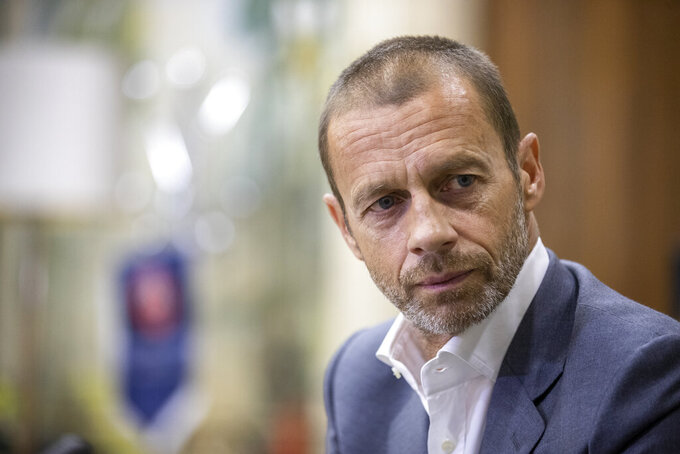 UEFA President Aleksander Ceferin during an interview with The Associated Press in Lisbon, Portugal, Sunday, Aug. 23, 2020. Ceferin says he will hold talks about retaining the single-game eliminator format that has been used to complete the pandemic-disrupted Champions League and Europa League seasons. (AP Photo/Manu Fernandez)

LISBON, Portugal (AP) — Having only just handed out the European Cup — three months later than planned — UEFA President Aleksander Ceferin is watching anxiously as the new season is already being disrupted by coronavirus cases.

The season should end with the European Championship being played in June and July 2021. But that is also how last season should have been completed before the pandemic forced UEFA in March to postpone its quadrennial event.

The lack of a vaccine, and the unpredictability of the pandemic, poses even more logistical complexities for a tournament that is already using 12 cities across Europe, with the semifinals and final at Wembley Stadium in London.

“For now, everyone confirmed and for now we stick to our plan to play 12 countries,” Ceferin said in an interview with The Associated Press. “But in February, we didn’t know that we would not play the Euro this year. So we are ready to adapt to any any kind of situation.

"But, for now, it looks like we will play the same system in 12 countries and I’m confident that that we will do it next year.”

Postponing Euro 2020 has already cost UEFA €100 million, Ceferin estimates. The financial impact could be greater on UEFA and European football nations if there is further disruption to the staging of the tournament.

“We will have to assess the situation when we finally get the vaccine and things get normal because, for now, you don’t know what will happen ... and when the situation will become normal,” Ceferin said. “The biggest problem in all that is predictability.”

The coronavirus is already causing problems for the early stages of the Champions League and Europa League. Teams from Kosovo have had games forfeited or postponed this month due to players contracting COVID-19.

“This is one of the most challenging things about the qualifying for now,” Ceferin said. “But if the governments will react in a way that they don’t allow teams to play, then we will have to think that the teams from those countries will have to play on a neutral ground.”

The immediate priority is ensuring the 55 national teams crisscrossing Europe can play their Nations League games in two weeks. Then there is the start of the group stage of the Champions League and Europa League in October.

"Countries are on the green list today and red list tomorrow,” Ceferin said. "We had some cases in football, quite a few. So the thing is, it’s very challenging and very difficult. But on top of it, absolutely unpredictable. And you never know what will happen tomorrow.”

Ceferin is hopeful, though, that fans can return to stadiums for European games by October. When Bayern Munich beat Paris Saint-Germain on Sunday night, it was the first Champions League final to be played without fans.

“It's sad in the stadium where you hear the coaches shout,” Ceferin said. “It’s not the same football, but it’s still better than nothing. I hope that we will have at least some spectators in in October. I think we should start if the situation with COVID doesn’t worse.”