UFC bouts return to Fight Island; McGregor back in octagon 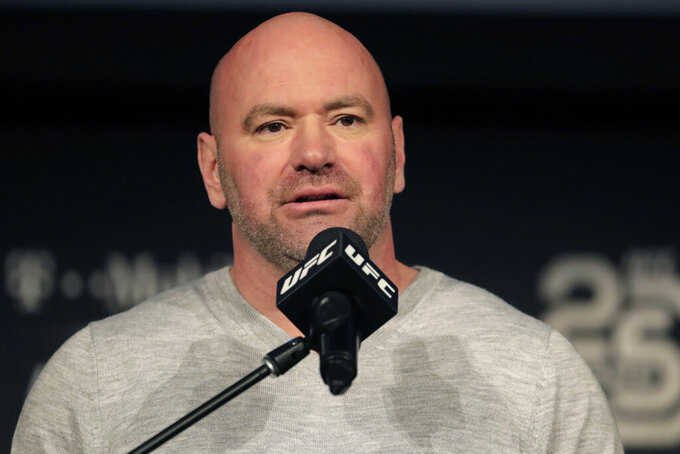 FILE - In this Nov. 2, 2018, file photo, UFC president Dana White speaks at a news conference in New York. The first of three straight fight nights at Etihad Arena on Abu Dhabi’s Yas Island kicks off Saturday, Jan. 16, when Max Holloway fights Calvin Kattar in a 145-pound bout in the main event of the first combat sports card aired on ABC since 2000. In UFC 257 on Jan. 24, Conor McGregor returns from a year-long layoff for a rematch against Dustin Poirier in the promotions's first pay-per-view of the year. (AP Photo/Julio Cortez, File)

UFC docked for a third time at Fight Island, and this time a pair of old rivals are primed to make the trip -- with a few thousand fans set to attend fights for the first time in 10 months.

The first of three straight fight nights at Etihad Arena on Abu Dhabi’s Yas Island kicks off Saturday when Max Holloway (21-6) fights Calvin Kattar (22-4) in a 145-pound bout in the main event of the first combat sports card aired on ABC since 2000. UFC welterweights Michael Chiesa and Neil Magny fight in the main event of Wednesday’s ESPN card.

That’s just an appetizer for UFC 257 on Jan. 24 when McGregor returns from a year-long layoff for a rematch against Dustin Poirier in the promotion’s first pay-per-view of the year.

By then, McGregor might know if another rematch is potentially on the table, this one against the undefeated Khabib Nurmagomedov, who called it quits in October with a 29-0 record after he retained his lightweight championship. McGregor’s last loss was against Nurmagomedov in October 2018 in a bout known more a post-fight melee that spilled outside the octagon. Saddened by the recent death of his father and mentor, Nurmagomedov surprisingly retired in his prime after he beat Poirier in Abu Dhabi.

UFC President Dana White wants one of his top box office draws to fight again, perhaps get to 30-0 and take it from there. The two are scheduled to meet at some point in Abu Dhabi.

“It’s yes or no,” White said by phone from Abu Dhabi. “I felt like going into that last fight, he obviously was very emotional, he was banged up, he was hurt. He was under a tremendous amount of pressure. Now he’s had plenty of time off. He’s healed up. He knows whether he wants to fight again or not. I think it will be a very quick conversation. If he says no, it’s no. I won’t even say another word.”

White’s gut feeling? “I feel like he’s got one more in him and he’ll say yes.”

White could only wish his relationship was that simple with McGregor.

McGregor (22-4) fights for the first time since his knockout win against Donald Cerrone last January and for only the third time since 2016. The 32-year-old McGregor, who became the biggest star in MMA with his heavy fists and self-promotional acumen, stayed away from the cage in large part because of his boxing match with Floyd Mayweather, his blossoming liquor venture, retirement claims and multiple arrests.

McGregor and White sparred in public last year when the former featherweight and lightweight champion released a series of Instagram direct messages in a “he said-he said” exchange over potential fight opponents.

“I honestly, at that point in time, didn’t think we were ever going to get over that,” White said. “I was really unhappy about it. I was wrong. He and I ended up talking and we got it worked out.”

They’ve buried the hatchet -- as businessmen are inclined to do with multi-millions of dollars at stake -- and White said McGregor seems as focused and confident about fighting as he’s been in years.

“I don’t know if I’d say he wasted (prime years) because if you look at what he’s accomplished in the short amount of time that he was here, and, listen, the kid made, and still makes a ton of money a year,” he said. “He leveraged his celebrity and what he’s done here in the UFC to make money outside the UFC, which is tough to do, for anybody. He didn’t just make some money. He made a life-changing substantial amount of money.”

McGregor has long helped UFC set box office records -- his 40-second KO of Cerrone earned about 1.4 million buys. But he was absent as the promotion pushed on in 2020 in the face of a pandemic and ran events nearly every weekend. UFC -- really, White -- was criticized for pushing forward in the wake of a pandemic, and he fired back with a nearly five-minute long propaganda video in which specific outlets and writers were condemned for speaking out against the promotion. UFC used to go door-to-door with newspapers and other media outlets seeking coverage of its events and fighters. White would beg ESPN for highlights on its programming and now UFC is tied to the sports network in a $1.5 billion deal.

He won. But it hasn’t been enough for the man who once dodged the money collectors for notorious crime boss Whitey Bulger.

“Believe me, that was the first round,” White said. “I’ve got another one coming.”

White said a UFC-produced documentary on how it navigated the early days of the pandemic is in the works and it takes aim on the media he claims “tried to get us shut down.”

It’s the media that also spreads the word of UFC headlines -- including an anti-doping policy change in which it will no longer punish fighters for using marijuana in most cases; a $1 million contribution this week toward brain trauma research; the continued fight against PPV piracy; and potential involvement with Johns Hopkins University about its psychedelics studies as a means to improve fighters’ brain health.

White had been adamant about not wanting to run big fights without a packed house, but when the Abu Dhabi Department of Culture and Tourism said it was time to let them in, he relented.

UFC decided not to pipe in artificial crowd noise, use cardboard cutouts or any other type of gimmicks other sports leagues used to enhance the atmosphere during its broadcasts. The fight night noise had been simply raw fist-on-face, though starting Saturday, about 2,000 fans are expected to attend each event on Abu Dhabi.

“I’ll do whatever these guys want,” White said. “If they want to put 2,000 or two people in here, I don’t care. But if we’re going into a venue back in the states or anywhere else, I’m not going to put anybody in there unless I can sell it out.”