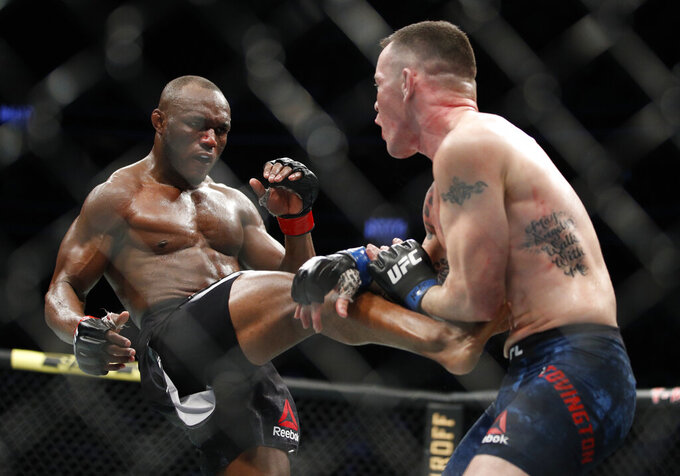 JACKSONVILLE, Fla. (AP) — When UFC President Dana White brought his mixed martial arts behemoth to Florida last May for a closed-door event, he promised a return trip once the state fully reopened.

He plans to make good on that statement Saturday night.

White will put on UFC 261 in front of a sellout crowd (15,000-plus) in Jacksonville that won’t be socially distant and probably mostly unmasked.

“There’s been a lot of monumental moments in my career and this is one of them,” White said.

The 33-year-old Usman beat Masvidal in July, winning a unanimous decision at UFC 251 at Fight Island in Abu Dhabi. Masvidal stepped in on six days’ notice, flying halfway around the world to fill in for No. 1 title contender Gilbert Burns after Burns tested positive for COVID-19.

Masvidal held his own and went five rounds against the champ, whose strategy including stomping on Masvidal’s feet every time they were locked up.

Despite being a considerable underdog at plus-330 in the rematch, Masvidal is sure to have the crowd behind him. Hundreds showed up at the pre-fight news conference to root for the 36-year-old Miami native, sometimes even interrupting questions and answers, and then waited in a long line to get a socially distant picture with the affable fighter.

That started an entertaining back-and-forth between the two.

Usman: “But the fans can’t fight for you.”

Masvidal: “I don’t need nobody. I’ll whoop your (butt) all by myself.”

Usman: “You said that last time. What happened?”

Masvidal: “You know what happened? You rubbed feet with me. I thought you wanted to fight. You rubbed your feet on mine pretty well. You’re pretty good at rubbing my feet, bro.”

Masvidal: “I didn’t get the broken nose; you did.”

Usman: “I came into the fight with a broken nose.”

Usman: “All right, all right. Let’s just be honest here. You’ve got 14 losses in your career, seven in the UFC. You’re 3-3 in your last six. You are sitting there today because I chose you. I’m coming around the track and you’re the first guy I’m about to lap. Period.”

Masvidal: “Don’t lose to this guy. When you figure it out and we stop on that rubbing-foot technique, you’re going to be in for a long one, man. I’m going to bust your face up and break more bones than last time.”

The other title bouts include defending champion Zhang Weili (21-1) of China against Rose Namajunas (10-4) of the United States for the women’s strawweight belt, and reigning champ Kyrgyzstan’s Valentina Shevchenko (20-3) against Brazil’s Jessica Andrade (21-8) for the women’s flyweight belt.

It will be the first time the UFC fights in front of fans in the United States in more than a year. There was a limited crowd for the last event at Fight Island in January.

White already has sellouts for UFC 262 in Houston next month and UFC 264 in Las Vegas in July.

Florida Gov. Ron DeSantis approved a reopening plan last year that allowed large sporting events to resume in late September, although reduced capacity and limited social distancing were recommended. But until UFC’s return, no one had allowed full capacity indoors.

Although UFC is encouraging the use of face coverings and even providing them for free at the event, they are unlikely to be largely in use.

“We want people to be able to come and make decisions for themselves about what they want to attend and not want to attend,” DeSantis said. “So this is going to be the first full-throttle arena sporting event since COVID hit, indoor, anywhere in the United States. And I think it’s fitting. …

“There’s a lot of stuff that comes flying at you, particularly from media, social media, all this stuff, and some people don’t like to handle that. Dana White goes right into the teeth of that and says, ‘I’m going to do what’s right. I’m going to stand my ground. I’m going to hold the line.’ I think UFC is better with his courage and quite frankly this event is good for Florida.”