Uganda death toll after opposition leader's arrest up to 45 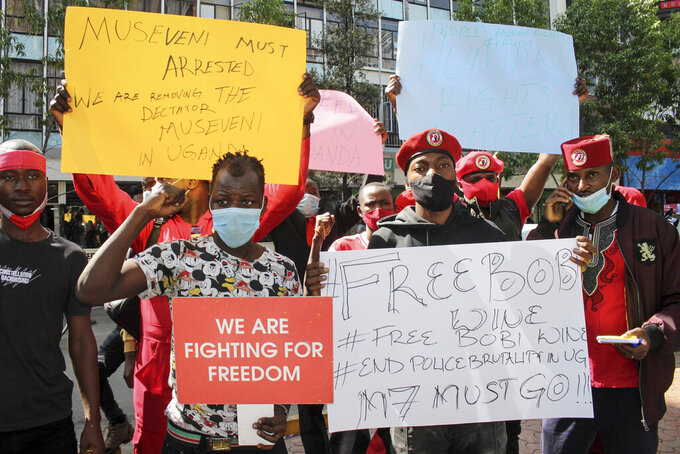 Ugandan supporters of opposition presidential candidate Bobi Wine protest his arrest and call for his release and an end to police brutality, outside the Ugandan High Commission in Nairobi, Kenya Thursday, Nov. 19, 2020. The death toll from protests over the arrest of Ugandan opposition presidential hopeful and musician Bobi Wine has risen to seven, Ugandan police said Thursday, as a second day of demonstrations began. (AP Photo)

KAMPALA, Uganda (AP) — The death toll from last week’s protests over the arrest of Ugandan opposition presidential hopeful and musician Bobi Wine has risen to 45, police say, with more than 800 people arrested.

Police spokesman Fred Enanga told reporters on Monday that “our hearts go to the families” of those killed. It was Uganda’s worst unrest in a decade. The election is early next year.

Enanga said the arrests occurred during the two days of protests that broke out on Nov. 18 after Wine was arrested again in the eastern town of Luuka.

Police accused him of flouting COVID-19 guidelines that require presidential candidates to address less than 200 people. He was later charged with negligent conduct likely to cause spread of an infectious disease.

Wine, who has been arrested many times in recent years, has captured the imagination of many Ugandans with his persistent calls for President Yoweri Museveni to retire after 36 years in power.

The United Nations secretary-general condemned the violence last week and called on Ugandan authorities to ensure that all ” perpetrators of human rights violation are held accountable.