UK to bolster defense spending by 'most since Cold War' 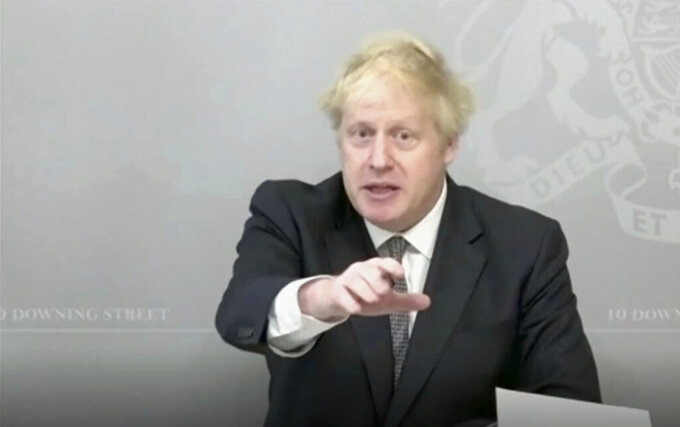 In this grab taken from video, Britain's Prime Minister Boris Johnson speaks via video link from 10 Downing Street during Prime Minister's Questions in the House of Commons, London. Wednesday, Nov. 18, 2020. Johnson is self-isolating after coming into contact with an MP who has since tested positive for coronavirus. (House of Commons/PA via AP)

LONDON (AP) — British Prime Minister Boris Johnson has given his backing to what is being touted as the biggest investment program in the country's armed forces since the end of the Cold War three decades ago.

Johnson is set to lay out the details of a four-year financial deal for the Ministry of Defense later Thursday that he said will "transform” the military, pivoting it towards potential future threats.

“The international situation is more perilous and more intensely competitive than at any time since the Cold War and Britain must be true to our history and stand alongside our allies," he said.

Johnson is to tell lawmakers remotely, because he is self-isolating after coming into contact with someone who subsequently tested positive for the coronavirus, that the armed forces will receive an additional 16.5 billion pounds ($21 billion) over and above the government's current plans.

Defense Secretary Ben Wallace said the deal is “enough” for the armed forces to be modernized but refused to be drawn on whether some of the new money will come from the country's overseas aid budget.

“This means that we can have a proper discussion about what are our global ambitions and how are we going to fund it," he told Sky News.

“When I go abroad, what many countries want from us is our knowledge, our equipment and our understanding of how to provide security and how to provide defense," he said.

Concerns have grown in recent months that the government is looking at ways to trim its commitments to overseas aid, partly because public finances have been strained by the costs associated with the coronavirus pandemic.

The government has already rolled the department overseeing overseas aid into the Foreign Office and some in government have argued for a reduction in aid spending from 0.7% of the country's national income gross to 0.5%, which would equate to billions of pounds.

Wallace insisted the government was not “abandoning the battlefield of international aid” but said the “decisions on the numbers” will be revealed by Treasury chief Rishi Sunak next week.

As part of the new defense spending, a new agency dedicated to artificial intelligence will be created. And a “space command” capable of launching the U.K.’s first rocket by 2022 is also envisioned.

Military chiefs have argued strongly for a multi-year deal so they can plan ahead, despite Sunak's abandonment of a long-term spending review as a result of the pandemic.