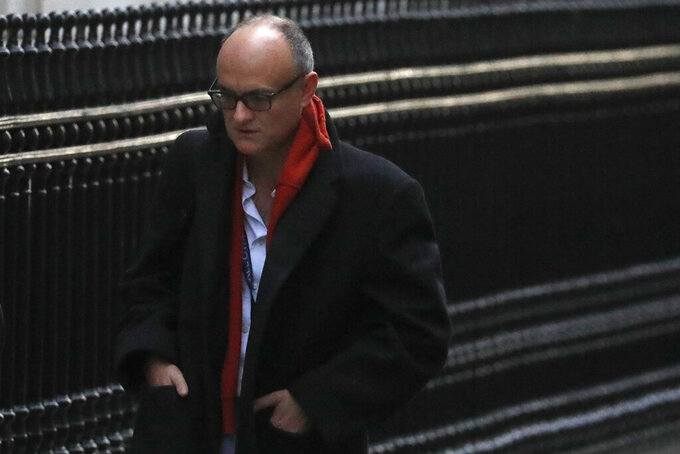 LONDON (AP) — Britain's High Court ruled Wednesday that the U.K. government acted unlawfully in awarding a contract to a company run by friends of the former top adviser to Prime Minister Boris Johnson.

In her ruling, Judge Finola O'Farrell found that a June 2020 decision by Cabinet Office minister Michael Gove to pay more than 500,000 pounds ($700,000) to market research firm Public First "gave rise to apparent bias and was unlawful.”

The case was brought by the Good Law Project, a legal campaigning group which argued that Dominic Cummings, Johnson’s then-chief adviser, wanted focus group and communications support services work to be given during the coronavirus pandemic to a company with executives who were his friends.

The judge ruled that the “failure to consider any other research agency, by reference to experience, expertise, availability or capacity, would lead a fair-minded and informed observer to conclude that there was a real possibility, or a real danger, that the decision-maker was biased.”

Critics have accused the Conservative government of taking shortcuts in awarding contracts during the early months of the pandemic to the benefit of close friends, supporters and associates.

“This is not government for the public good. It is government for the good of friends of the Conservative Party,” Good Law Project director Jo Maugham said. “We just don’t understand how the prime minister can run a Cabinet that acts without proper regard for the law or value for public money.”

The government and Cummings, who left his job in late 2020, consistently denied any favoritism was shown and said decisions had to be made in haste early in the coronavirus pandemic.

A spokesperson for Public First said the company was “deeply proud of the work we did in the early stages of the pandemic, which helped save lives.”

A spokesperson for the Cabinet Office welcomed the ruling, saying the judge had concluded the office was “entitled to award the contract on grounds of extreme urgency in response to an unprecedented global pandemic.”

"The judgment makes clear that there was no suggestion of actual bias and that the decision to award the contract was not due to any personal or professional connections,” he said.