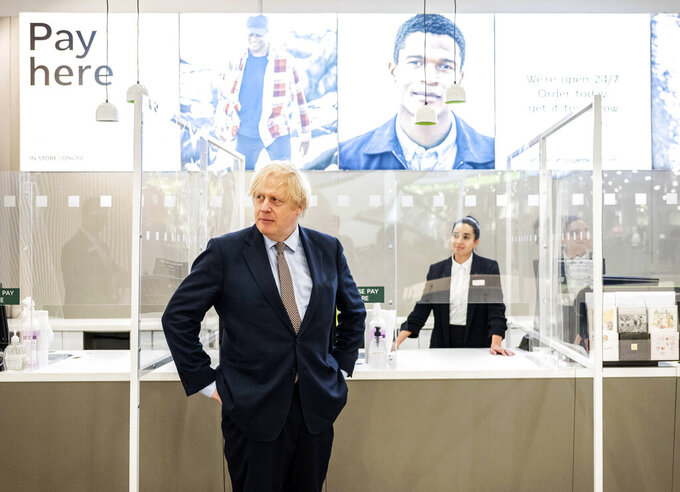 Britain's Prime Minister Boris Johnson visits a shop in Westfield Stratford shopping centre in east London, Sunday June 14, 2020, to see the preparations the stores are making to be COVID-19 secure, ahead of non-essential retail being able to reopen from Monday morning. (John Nguyen/Pool via AP) 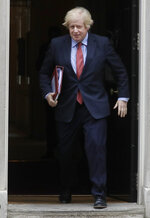 LONDON (AP) — Prime Minister Boris Johnson announced Tuesday that he is merging the British government's international development department into its foreign ministry to create a “super department” in charge of both diplomacy and aid. The move was criticized by three of Johnson's predecessors as prime minister.

He said the combined department would “magnify” Britain's voice on the world stage while linking development aid to Britain's values and goals.

Johnson said aid should not be treated as a “giant cashpoint (ATM) in the sky” divorced from the U.K.'s interests

Critics argued that the move would dilute Britain's role in international development. But Johnson said many other countries, including Canada, New Zealand and Australia, already deliver aid through their foreign ministries.

He said the U.K. would continue to to meet the United Nations’ target of spending 0.7% of Gross National Income on foreign aid.

“This is exactly the moment when we must mobilize every one of our national assets, including our aid budget and expertise, to safeguard British interests and values overseas — and the best possible instrument for doing that will be a new department charged with using all the tools of British influence to seize the opportunities ahead,” Johnson said.

Aid groups responded to the announcement with alarm. Danny Sriskandarajah, chief executive of Oxfam GB, said that with the coronavirus pandemic threatening to push half a billion people around the world into poverty, “the U.K. should be stepping up to protect lives but is instead choosing to step back.”

Opposition Labour Party leader Keir Starmer said the government shakeup was “the tactics of pure distraction," intended to deflect attention from the Conservative government's mishandling of COVID-19. Britain's reported COVID-19 death toll of more than 41,800 as of Tuesday is the third-highest in the world, according to a Johns Hopkins University tally.

Starmer said that abolishing the development department “diminishes Britain’s place in the world.”

Former Prime Minister Tony Blair, whose Labour government established the international development department in 1997, said he was “utterly dismayed by the decision."

“The strategic aims of alignment with diplomacy and focus on new areas of strategic interest to Britain could be accomplished without its abolition. Wrong and regressive move," Blair said.

Blair's successor as prime minister, Gordon Brown, tweeted that the department "has lifted millions of people out of poverty, saved millions of lives, and helped millions more children go to school. It’s sad the government is abolishing one of the UK’s great international assets.”

Cameron tweeted that abolishing the development department was a “mistake” that would mean "less expertise, less voice for development at the top table and ultimately less respect for the UK overseas.”