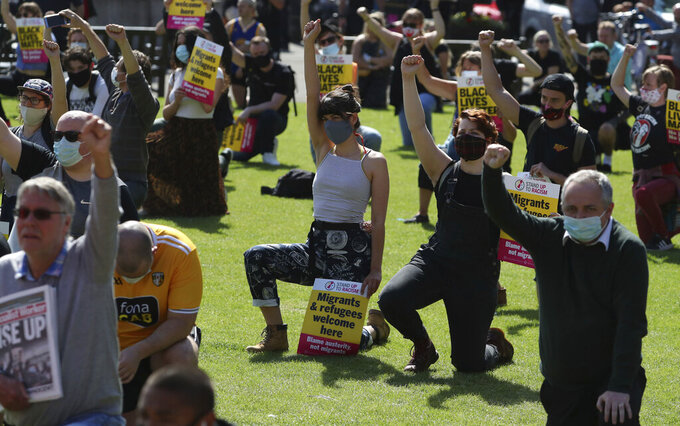 Protesters take a knee during a Glasgow Says No to Racism event in Glasgow, Scotland, Saturday June 20, 2020. The public gathering is aimed at "sending a positive anti-racist message from Glasgow's George Square to the world on World Refugee Day" according to their public declaration. (Andrew Milligan/PA via AP)

LONDON (AP) — Anti-racism demonstrators held protests across the U.K. for a fourth weekend on Saturday, despite a ban on large gatherings because of the coronavirus pandemic.

Demonstrations inspired by the Black Lives Matter campaign were taking place in cities including London, Manchester, Edinburgh and Glasgow.

Several thousand people gathered in London’s Hyde Park, sitting on the grass and listening to speakers, before setting off on a boisterous, peaceful march to Trafalgar Square. A smaller group marched from south London, near the U.S. Embassy.

The largely youthful crowds in London were smaller — and more socially distanced — than those seen in the first two weeks after Floyd’s death. Since then the protest movement has become more geographically widespread, with hundreds of demonstrations held in towns, cities and neighborhoods across the U.K.

Jeremy Mukel, 33, originally from New York, said he was encouraged by the number of white people among the protesters in London.

“I think people are becoming a lot more aware,” he said.

Hundreds attended a socially distanced Say No to Racism rally in Glasgow’s George Square, where earlier this week members of the far right attacked a refugee-rights gathering.

In Edinburgh, protesters including “Trainspotting” author Irvine Welsh called for the removal of a statue of Henry Dundas from its column in the city’s St. Andrew Square. The late 18th-century Scottish politician was responsible for delaying Britain’s abolition of the slave trade by 15 years until 1807. During that time, more than half a million enslaved Africans were trafficked across the Atlantic.

Hundreds of thousands of people have held mostly peaceful protests across Britain since the death of George Floyd in Minneapolis on May 25, urging the U.K. to confront its own history of imperialism and racial inequality.

After some protesters scuffled with police and defaced a statue of wartime Prime Minister Winston Churchill in London, and demonstrators in Bristol toppled a statue of slave trader Edward Colston, counter-protesters rallied last week with the stated aim of protecting monuments.

Hundreds of soccer hooligans and far-right activists clashed June 13 with police near the Churchill statue in London, which had been boarded up for protection.

Prime Minister Boris Johnson has announced he is setting up a commission to look at what more can be done to eliminate racial injustice, but opponents accuse the Conservative government of opting for talk rather than action.

Protests were also being held Saturday in France, where hundreds of people in Paris marched against racism and police violence and in memory of Black men who have died following encounters with French police or under suspicious circumstances.