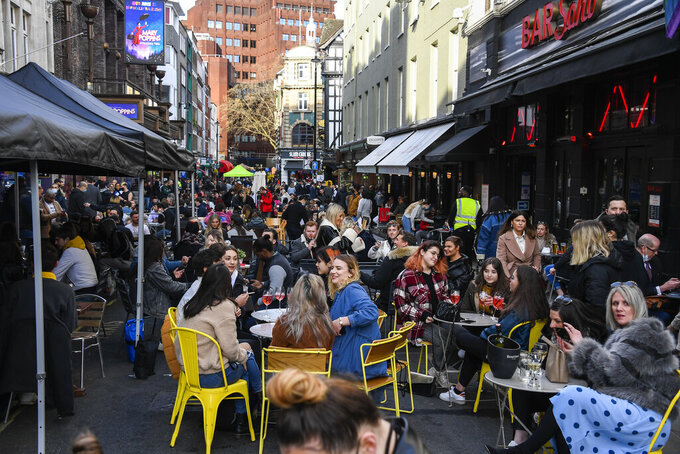 FILE - In this Monday, April 12, 2021 file photo, people sit, drinking and eating, outside cafes and pubs in Soho, central London, on the day some of England's coronavirus lockdown restrictions were eased by the British government. The easing of lockdown restrictions in April helped the British economy grow at its fastest rate since July 2020 and recoup further ground lost during the coronavirus pandemic, official figures showed Friday June 11, 2021. (AP Photo/Alberto Pezzali, File)

LONDON (AP) — The easing of lockdown restrictions in April helped the British economy grow at its fastest rate since July 2020 and recoup further ground lost during the coronavirus pandemic, official figures showed Friday.

The Office for National Statistics said the economy grew by 2.3% during April, which saw the reopening of shops selling non-essential items and a number of other service providers, such as hairdressers, resuming work. Schools were fully open for in-class learning, while pubs and restaurants were able to serve customers outdoors for the whole month.

The four nations of the U.K. — England, Scotland, Wales and Northern Ireland — have been lifting lockdown restrictions in stages after new coronavirus infections fell sharply and vaccines were rolled out rapidly.

Despite the growth recorded in April, the British economy remained 3.7% smaller than it was in February 2020, before the U.K.'s first virus lockdown. Of the major sectors in the economy, only construction was above the level it was at on the eve of the pandemic.

The British economy is expected to regain more ground over the summer as remaining restrictions are lifted.

“Following the historic collapse in spring 2020, the U.K. remains on track to return to its pre-pandemic level by the turn of the year,” said Holger Schmieding, chief economist at Berenberg Bank. “Judging by recent data trends, that could happen even sooner.”

Though most sectors of the economy have reopened, there are concerns that the next planned easing for England, scheduled for later this month, may have to be delayed because of a recent spike in new infections largely due to the delta variant that was first identified in India.

The hope is that the rapid rollout of vaccines will dramatically break the link between new infections, hospitalizations and deaths. So far, the evidence suggests that a large proportion of the people being infected are in younger age groups, many of which have yet to receive a first dose.

Under the government's plan for ending lockdown measures, social distancing restrictions are set to be lifted on June 21, which would be a particular boon to businesses such as pubs and cinemas. They are currently operating with capacity limits to meet the need to keep people apart.

British Prime Minister Boris Johnson plans to announce Monday whether the next easing will take place.