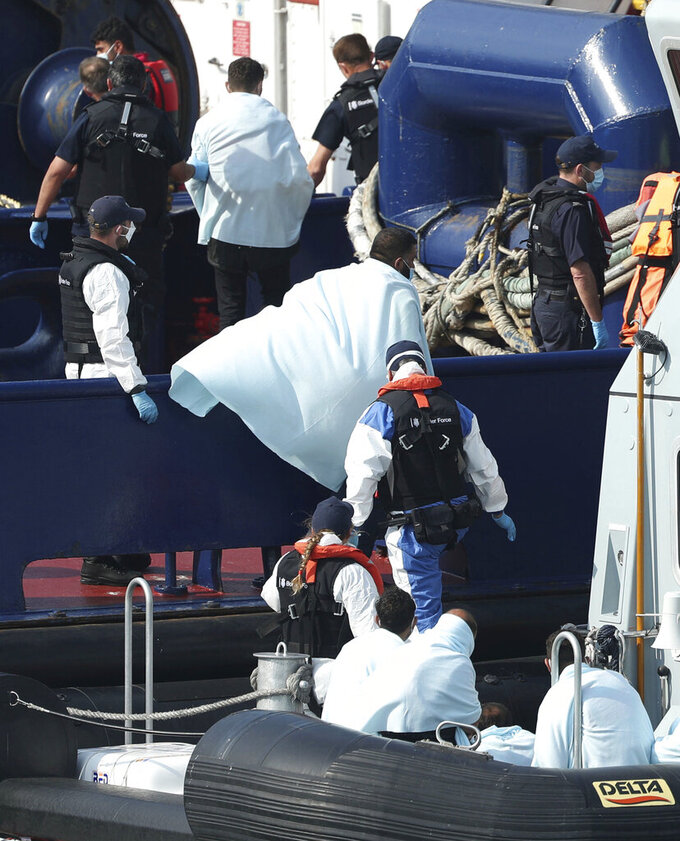 A Border Force vessel brings a group of people thought to be migrants into the port city of Dover, southern England, Sunday Aug. 9, 2020. Many migrants have used small craft during the recent hot calm weather to make the dangerous journey from northern France, to cross the busy shipping lanes of The Channel to reach Britain. (Yui Mok/PA via AP)

LONDON (AP) — A Royal Air Force surveillance plane flew over the English Channel on Monday as the British government sought to stop a growing number of people making the hazardous crossing from France in small boats.

Britain’s Conservative government has talked tough amid a surge in the number of migrants crossing the Channel during recent warm summer weather. More than 650 have arrived so far in August — including 235 in a single day last week — with pregnant women, babies and unaccompanied children among them..

An inflatable dinghy carrying about 20 people was met by a U.K. Border Force boat on Monday and escorted to the port of Dover.

Prime Minister Boris Johnson said trying to make the voyage was “a very bad and stupid and dangerous and criminal thing to do.”

“Be in no doubt what’s going on is the activity of cruel and criminal gangs who are risking the lives of these people taking them across the Channel, a pretty dangerous stretch of water in potentially unseaworthy vessels,” Johnson said during a visit to a school near London.

Patel has also said the Royal Navy could be called in to prevent boats reaching U.K. waters, though other senior officials and politicians say that would be impractical and potentially dangerous because small boats could capsize if they are forced back to the French shore.

The Ministry of Defense said it was considering how the military could best help. It said the RAF Atlas aircraft was deployed on Monday “to support Border Force operations in the Channel.”

Migrants have long used northern France as a launching point to get to Britain, either in trucks through the Channel tunnel or on ferries. Before the coronavirus pandemic, the U.K.’s strong economy and need for farm and restaurant labor drew migrants from around the world who could speak some English.

Some have turned to small boats organized by people smugglers because coronavirus lockdowns have reduced opportunities to stow away on ferries and trucks. Fine summer weather is also prompting more people to make the risky journey across one of the world’s busiest shipping lanes — about 20 miles (32 kilometers) at its narrowest point — in vessels as small as dinghies and kayaks.

The British and French immigration ministers were due to hold talks in Paris on Tuesday about the Channel crossings, as some British politicians accused France of not doing enough to stop boats leaving shore.

The migrants, and the smugglers who profit off them, have long dogged French politicians, who have failed to find an effective way to deter them.

French authorities routinely pick up migrants trying to illegally cross the Channel, most recently on Sunday, when rescuers retrieved 17 migrants from a rubber dinghy in distress off Calais.

Over the past week, French rescuers have picked up 125 migrants from kayaks, rubber boats or other small vessels trying to cross the Channel, according to near-daily statements from the regional maritime authority.

Last month Britain and France agreed to set up a joint intelligence unit to allow for better exchanges of information about people-smuggling networks.

The lawmaker for Calais accused the U.K. government of political grandstanding with talk of sending in the Royal Navy.

“This is a political measure to show some kind of resource to fight against smugglers and illegal crossings in the Channel, but technically speaking that won’t change anything,” Pierre-Henri Dumont told the BBC.

Human rights groups also criticized the British government’s harsh rhetoric and said asylum-seekers should be given safe routes to reach the U.K.

“Seeking asylum is not a crime, and it is legitimate that people have to cross borders to do so,” she said.

Angela Charlton in Paris contributed to this story.