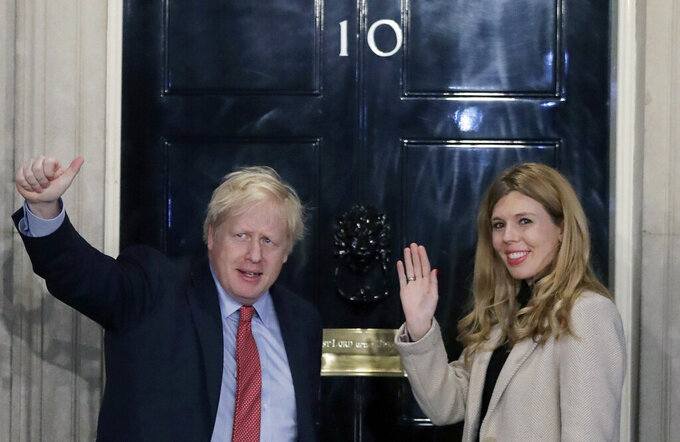 FILE -In this Friday, Dec. 13, 2019 file photo, Britain's Prime Minister Boris Johnson and his partner Carrie Symonds wave from the steps of number 10 Downing Street in London. Boris Johnson and his partner Carrie Symonds have announced she gave birth to a "healthy baby boy at a London hospital earlier this morning”, Wednesday April 29, 2020, saying that both mother and baby are doing well. (AP Photo/Matt Dunham, file) 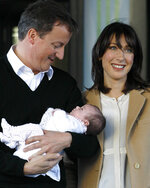 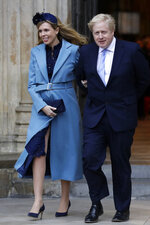 LONDON (AP) — British Prime Minister Boris Johnson and his fiancee Carrie Symonds announced the birth of a son on Wednesday, just two days after Johnson returned to work following hospitalization for the coronavirus.

Johnson's office said Symonds gave birth to a “healthy baby boy" in a public hospital in London on Wednesday morning, and that both mother and infant were doing well.

Johnson was present for the birth but was back at work in 10 Downing St. within hours, as his government faces a deadline of next week to amend or extend the country's coronavirus lockdown. Johnson's office said he would take paternity leave later in the year.

Conservative leader Johnson, 55, and Symonds, 32, announced in February that they were engaged and expecting a child together. At the time they said the baby was due in early summer.

Johnson only returned to work Monday after suffering from a bout of coronavirus that left him dangerously ill. He spent a week in London's St. Thomas' hospital, including three nights in intensive care. When he was discharged on April 13, he thanked medical workers at the hospital for saving his life, saying his condition “could have gone either way.”

Symonds, an environmental campaigner and former Conservative Party staffer, also said she was sick for a week with COVID-19 symptoms, though she wasn't tested for the virus.

Johnson’s office would not confirm Symonds' due date or say whether the couple’s son had been born prematurely.

There has been speculation about links between the coronavirus in pregnant women and premature births. But Andrew Shennan, professor of obstetrics at King's College London, said “there is currently no evidence that coronavirus causes preterm labor.”

The newborn boy is Symonds' first child. Johnson has four children with his second wife Marina Wheeler, from whom he is divorced, and has fathered at least one other child outside his marriages.

Downing St. would not confirm now many other children Johnson has, saying only that he was “delighted about the birth of his baby son.”

The baby is the third born to a sitting British prime minister this century. The wives of leaders Tony Blair and David Cameron also had babies while their husbands were in office.

The birth comes as the British government faces big decisions about how and when to ease the nationwide lockdown imposed March 23 to slow the spread of the coronavirus. The measures are due to be in place at least until May 7.

Britain is among the countries hardest hit by the pandemic. On Wednesday the official death toll of people with the coronavirus in the U.K. leapt to 26,097, from 21,678 a day earlier, after deaths outside hospitals — in nursing homes and other settings — were added for the first time.

Johnson's government faces growing criticism over its slowness in getting enough protective equipment to medics and nursing home staff and its struggle to increase the number of tests being performed for the virus.

Johnson missed the weekly Prime Minister's Questions session on Wednesday after the birth. Foreign Secretary Dominic Raab stood in for him.

Opposition Labour Party leader Keir Starmer, who had been due to face off against Johnson in the Commons, said he hoped the birth brought the couple “incredible relief and joy."

“Such happy news amid so much uncertainty – 2020 is certainly a year they will never forget,” he said.