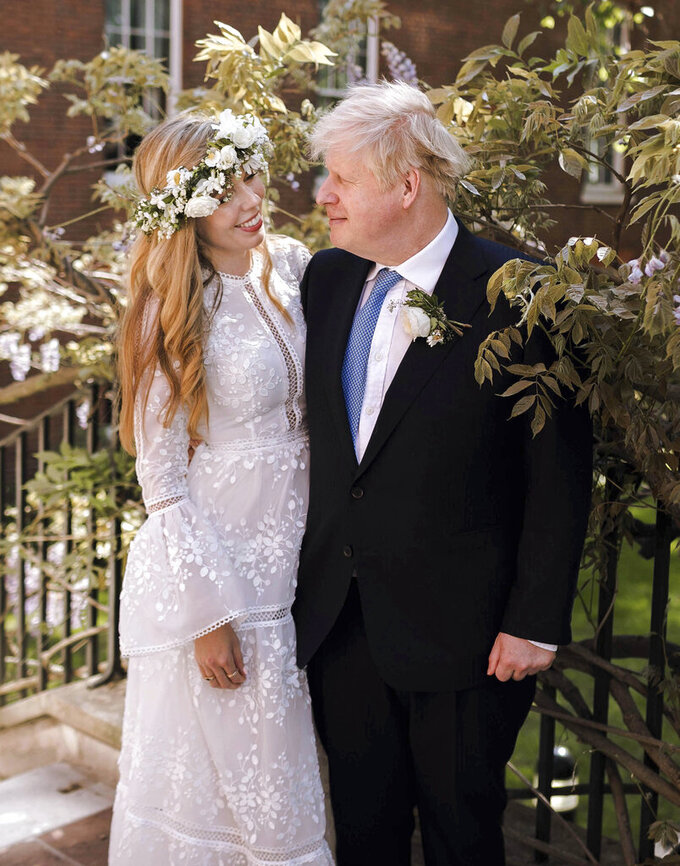 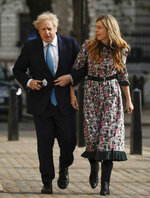 LONDON (AP) — British Prime Minister Boris Johnson has married his fiancée, Carrie Symonds, in a small private ceremony that came at the end of a tumultuous week during which a former top aide said he was unfit for office.

The couple wed Saturday at the Roman Catholic Westminster Cathedral in front of a small group of friends and family, Johnson's office said Sunday, confirming newspaper reports that were published overnight. Photos taken after the ceremony in the garden of the prime minister's residence showed Symonds in a long white dress and floral headband. Johnson wore a dark suit.

“The Prime Minister and Ms. Symonds were married yesterday afternoon in a small ceremony at Westminster Cathedral,'' Downing Street said. “The couple will celebrate their wedding with family and friends next summer.”

The couple have reportedly sent save-the-date cards to family and friends for a celebration on July 30, 2022. Under current coronavirus restrictions in England, no more than 30 people can attend a wedding.

Johnson, 56, and Symonds, a 33-year-old Conservative Party insider and environmental advocate, announced their engagement in February 2020. Their son, Wilfred, was born in April last year.

The marriage is Johnson’s third. He has at least five other children from previous relationships.

Johnson's previous marriages would not have stopped him from having a Catholic wedding because they didn't take place in the Catholic church, Matt Chinery, an ecclesiastical and canon lawyer, told Times Radio.

“In the eyes of the Catholic church, Boris Johnson woke up last week as somebody who wasn’t married and had never been married and so was free to marry in the cathedral this weekend,” he said.

Johnson was baptized as a Catholic but he was confirmed as a member of the Church of England as a teenager.

The last British prime minister to marry in office was Lord Liverpool in 1822.

The wedding followed a difficult political week for Johnson.

His former top aide, Dominic Cummings, on Wednesday told lawmakers that Johnson had bungled the government’s response to the coronavirus pandemic and said he was “unfit for the job.”

Britain has Europe's highest coronavirus death toll, at over 128,000 people, but it has also produced one of the world's most successful vaccination programs, inoculating 74% of its adults. Daily deaths have plummeted to single digits of late, compared to over 1,800 one day in January.

On Friday, a government ethics adviser released his long-awaited findings on the “cash for curtains" scandal in which Johnson was criticized for failing to disclose that a wealthy Conservative Party donor had paid for the redecoration of the prime minister's official residence in London. Although Johnson later settled the bill, the inquiry found that Johnson had acted “unwisely” in carrying out the work without knowing where the money had come from. He was cleared of misconduct.

The opposition Labour Party was not giving Johnson any space for a honeymoon, with one Labour lawmaker, Jon Trickett, suggesting that the weekend wedding was “a good way to bury this week’s bad news.”