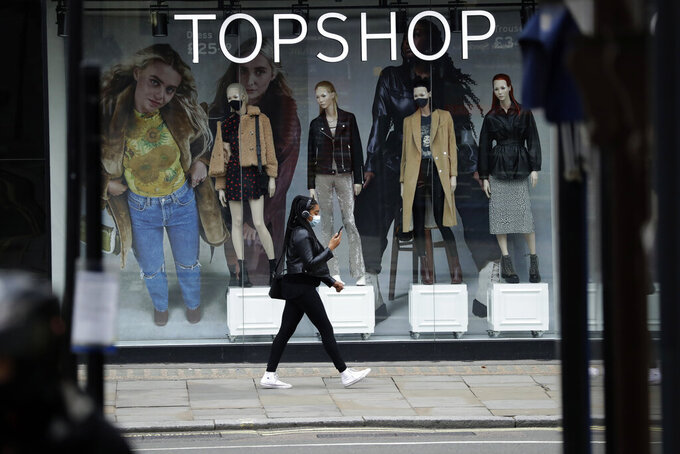 FILE - In this file photo dated Friday, Nov. 20, 2020, a woman wearing a face mask walks past mannequins wearing face masks in the window of a temporarily closed branch of the Topshop women's clothing chain during England's second coronavirus lockdown, in London. Some 15,000 retailing jobs in Britain are in peril after Arcadia Group, owner of some of the country's best-known fashion chains like Topshop, confirmed Friday Nov. 27, 2020, that it is in talks about its future. (AP Photo/Matt Dunham, FILE)

LONDON (AP) — The retail empire of tycoon Philip Green, which owns well-known British fashion chains like Topshop, appears to be on the brink of collapse following the economic shock of the coronavirus pandemic.

In another blow to the British retailing industry in the run-up to the crucial Christmas trading period, Arcadia Group said Friday it is working on “contingency options to secure the future of the group’s brands.”

Like other high street names, Arcadia's brands - which employ around 15,000 people and include Burton, Miss Selfridge and Dorothy Perkins - have suffered during the pandemic and the associated restrictions across the U.K.

Competition has increased from low-cost rivals like Primark, as well as from online disruptors such as ASOS and Boohoo. Critics have also said that the 68-year-old Green, who has been embroiled in a series of controversies over the past few years, has not invested enough in the businesses to get them in shape to deal with the new competition in retail.

In a statement, the group sought to blame the virus for its woes. It said the "forced closure of our stores for sustained periods as a result of the COVID-19 pandemic has had a material impact on trading across our businesses.”

However, it stressed that its brands “continue to trade” and that its stores will be opening again in England as soon as coronavirus restrictions are lifted next week.

England is in a four-week lockdown that has forced the closure of all shops selling items deemed to be non-essential. The lockdown expires on Dec. 2 and shops will be allowed to reopen. The other nations of the U.K. — Scotland, Wales and Northern Ireland — have taken slightly different approaches but all have at various stages reimposed restrictions that closed non-essential shops.

Arcadia has reportedly been in emergency talks with lenders in a bid to secure a 30 million-pound ($40 billion) loan.

If it goes into so-called administration as soon as next week, there is likely to be a scramble among creditors to get control of company assets.

It is the latest retailer to have been hammered by the closure of stores during the pandemic, with rivals in Britain including Debenhams, Edinburgh Woollen Mill Group and Oasis Warehouse all sliding into insolvency.

On Friday, menswear retailer Moss Bros also launched an insolvency process to reduce its rent costs and protect itself in the future. In addition to being affected by the lockdowns, the firm has suffered from wedding cancellations and decreased demand for office clothing. It operates 128 stores and employs about 800 staff.

For the past couple of decades, Green has been one of the most influential executives in European retailing. He bought Arcadia in 2002 and subsequently came close to taking over Marks & Spencer, too.

His no-nonsense attitude won him admirers and helped his brands to link up with the likes of supermodel Kate Moss and singer Beyonce.

But a series of scandals over the past few years tarnished his reputation and led to calls for him to be stripped of the knighthood that Queen Elizabeth II awarded him in 2006.

For many, his high pay came to symbolize the excesses of the corporate world, especially when his brands were in need of investment. And a slow response to the consumer shift to online shopping meant the brands failed to keep up.

It was after the global financial crisis of 2008 that the underlying problems with his businesses really started to show, especially after his decision to sell BHS, a fixture on British high streets for decades, for just 1 pound to struggling entrepreneur Dominic Chappell.

About a year later, BHS collapsed, costing 11,000 people their jobs and leaving a pension deficit of around 571 million pounds ($760 million). Though Green subsequently paid hundreds of millions into the pension, his reputation never recovered. Chappell, meanwhile, was this month sentenced to six years in jail for tax evasion during his time running BHS.