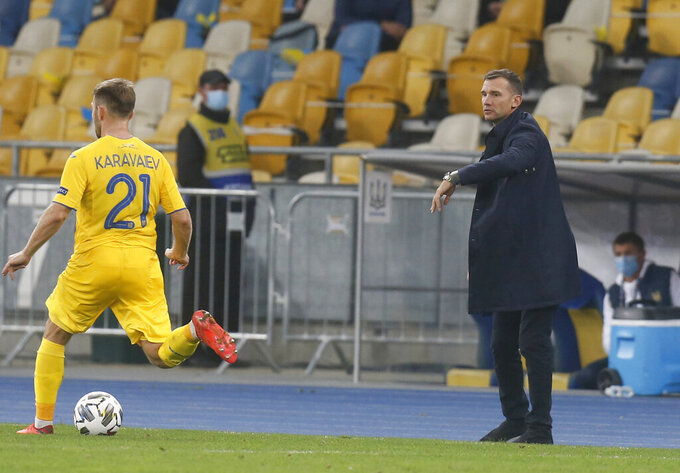 GENEVA (AP) — Rules for calling off European soccer games during the pandemic were challenged by Ukraine in an appeal hearing Tuesday at the Court of Arbitration for Sport.

The Ukrainian soccer federation appealed against being ordered by UEFA to forfeit a Nations League game in Switzerland in November after some players tested positive for COVID-19.

That ruling relegated Ukraine into the second tier of the Nations League instead of the Swiss.

It was among 12 games not played of 1,028 organized by UEFA last year when international competitions resumed in August after the lockdown. UEFA published the figures Tuesday hours before the Champions League resumed with Leipzig playing Liverpool in neutral Hungary.

The court said it was unclear when a verdict is expected.

The next group stage of the Nations League is expected to start in June 2022.

The Ukrainian federation later said its players tested negative upon returning to Kyiv.

The appeal calls for CAS to order UEFA to reschedule the game or draw lots to decide a result. UEFA’s amended competition rules in the pandemic gave three lottery options: a 1-0 win for either team or a 0-0 draw.

If lots are drawn, only a 1-0 loss would relegate Ukraine on a head-to-head tiebreaker with Switzerland. The other two options would reprieve Ukraine.

UEFA protocols for international games it organizes during the pandemic recognize the decision-making power of public authorities.

CAS has upheld UEFA’s rules in several appeals brought last year by clubs who had games in Champions League and Europa League qualifying rounds postponed or canceled and then forfeited.

UEFA said Tuesday there were 173 positive cases of COVID-19 in 19,583 tests taken for Nations League players and officials last year.

Norway forfeited a game in Romania when the team was barred by its own health officials from traveling to Bucharest.

Across 12 UEFA competitions, including the Champions League, there were 1,459 positive cases in about 125,000 tests performed from August through December, the European soccer body said.