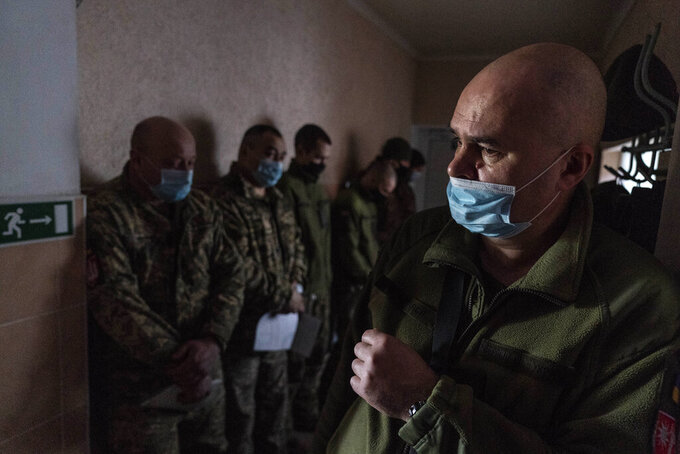 Ukrainian servicemen wait to receive a dose of the AstraZeneca COVID-19 vaccine marketed under the name CoviShield at a military base in Kramatorsk, Ukraine, Tuesday, March 2, 2021. Ukraine plans to vaccinate 14.4 million people this year, or about 35% of its 41 million people. (AP Photo/Evgeniy Maloletka) 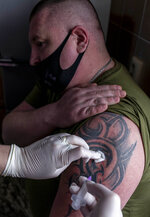 President Volodymyr Zelenskiy got the AstraZeneca vaccine as he visited the military near the area of the separatist conflict in eastern Ukraine.

“Vaccine will let us live without restrictions again,” he wrote on Twitter.

Zelenskiy got the shot even though he had the coronavirus in November. His move comes as many medical experts, who have priority to get the vaccine, refuse to receive it.

Ukraine began the immunization effort last week after receiving the first 500,000 doses of AstraZeneca vaccine from India. It plans to give the shots to 14.4 million people, or about a third of its population.

Overall in the pandemic, Ukraine has recorded more than 1.3 million infections and 26,212 deaths.

Ukraine expects to receive more doses of vaccine through the U.N.-supported COVAX distribution program, including those produced by Pfizer-BioNTech and Novavax. The country also signed an agreement to purchase 1.9 million doses from China’s Sinovac Biotech.

Speaking in parliament, Oleksandr Kornienko, a leading member of Zelenskiy's Servant of the People faction, said that medical facilities had to destroy many doses of the vaccine after medical specialists scheduled to get the shots failed to appear.

“We need to destroy the much-anticipated vaccine now,” Kornienko said. “It's important to understand why the medical experts refuse to get vaccinated.”

Opinion polls indicate that about 40% of Ukrainians don't want to get the vaccine.

In the city of Kramatorsk near the front line in the east, many military servicemen who are also given priority to receive the vaccine refused to get the shots.

One soldier who accepted the vaccine, Oleh Kiryi, said many of his colleagues “have doubts about the quality of the vaccine.” He added that some others refuse the vaccine because they already had the virus.

Another soldier, who goes under the nom de guerre Romeo, said that only about 30% of soldiers at his unit agreed to receive the shots.