UN chief urges wealth tax of those who profited during COVID 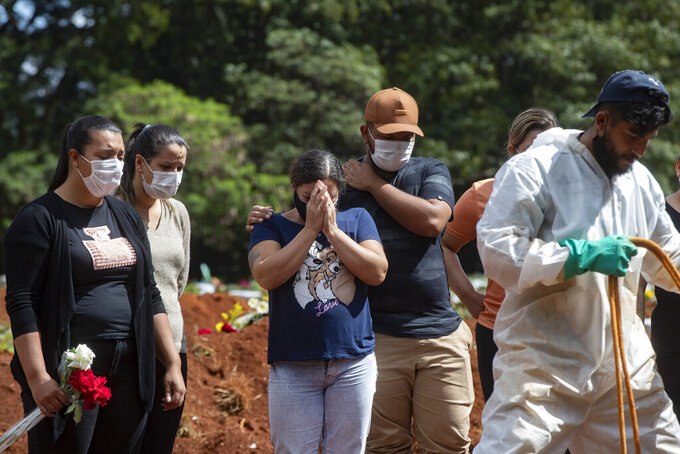 FILE - In this April 7, 2021, file photo, people attend the burial of a relative who died from complications related to COVID-19 at the Vila Formosa cemetery in Sao Paulo, Brazil. Nations around the world set new records Thursday, April 8, for COVID-19 deaths and new coronavirus infections, and the disease surged even in some countries that have kept the virus in check. Brazil became just the second country, after the U.S., to report a 24-hour tally of COVID-19 deaths exceeding 4,000. (AP Photo/Andre Penner, File)

UNITED NATIONS (AP) — Secretary-General Antonio Guterres declared Monday that the world’s failure to unite on tackling COVID-19 created wide inequalities, and he called for urgent action including a wealth tax to help finance the global recovery from the coronavirus.

The U.N. chief said latest reports indicate that “there has been a $5 trillion surge in the wealth of the world’s richest in the past year” of the pandemic. He urged governments “to consider a solidarity or wealth tax on those who have profited during the pandemic, to reduce extreme inequalities.”

Guterres' call followed an appeal in October by U.N. World Food Program Executive Director David Beasley to the more than 2,000 billionaires in the world, with a combined net worth of $8 trillion, to open their bank accounts. He warned in November that 2021 would be worse than 2020, and without billions of dollars “we are going to have famines of biblical proportions in 2021.”

Guterres told the U.N. Economic and Social Council’s Forum on Financing for Development that since the pandemic began “no element of our multilateral response has gone as it should."

He pointed to more than 3 million deaths, increasing coronavirus infections, the worst recession in 90 years, some 120 million people falling back into extreme poverty, and the equivalent of 255 million full-time jobs lost.

“Advancing an equitable global response and recovery from the pandemic is putting multilateralism to the test,” he said. “So far, it is a test we have failed."

“The vaccination effort is just one example,” Guterres said, stressing that just 10 countries account for around 75% of global vaccinations and many countries haven’t even started vaccinating their health care workers and most vulnerable citizens.

“Some estimates put the global cost of unequal access and vaccine hoarding at more than $9 trillion,” he said.

The lack of global solidarity also means that while some countries have mobilized trillions of dollars for COVID-19 relief for their citizens, “many developing countries face insurmountable debt burdens” and face an impossible choice of servicing debt or saving lives, the secretary-general said.

Guterres called for urgent action to make vaccines available to everyone, everywhere; to not only help developing countries but middle-income countries in distress. He said debt payments should be suspended beyond the end of the year into 2022 and the international community needs to tackle the roots of the global debt crisis. He said there also must be investment “in education, decent and green jobs, social protection and health systems.”

He again urged countries to deliver on the $100 billion annual commitment made a decade ago to help developing countries reduce their emissions and cope with the inevitable impacts of global warming, such as sea level rise and droughts.

Pakistani Prime Minister Imran Khan opened the forum urging mobilization of money for developing countries “to recover from the COVID-inducted recession” and put them on the path to achieve U.N. development goals for 2030 including eliminating extreme poverty.

He warned that if vaccines are not made available to people everywhere as soon as possible “the virus will roam around and come back.”

“Production of the vaccine must be ramped up,” Khan said. “Patent and technology-transfer restrictions should be waived to enable this.”

Malawi President Lazarus McCarthy, chair of the group of 46 least developed countries, called for access to vaccines and adequate funding for the World Health Organization’s COVAX facility to buy and deliver vaccines to developing nations. WHO says COVAX needs $5 billion in 2021.

McCarthy told the forum the least developed countries, known as LDCs, also want to ensure “that COVID-19 vaccines go beyond the current provision of 20 percent” for the entire population under COVAX.

He also called for “full debt cancellation of all bilateral, multilateral and commercial debts owed by LDCs and a debt standstill with immediate effect” and stepped up development aid including financing to bring the world's poorest nations into the digital world.