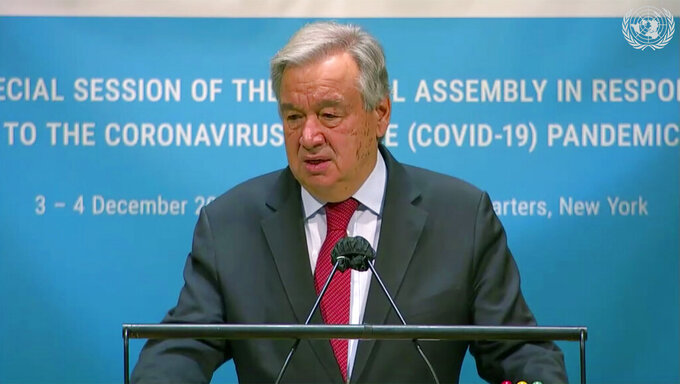 In this image made from UNTV video, United Nations Secretary General Antonio Guterres speaks during the U.N. General Assembly's special session to discuss the response to COVID-19 and the best path to recovery from the pandemic, Thursday, Dec. 3,2020, at U.N. headquarters, in New York. (UNTV via AP)

UNITED NATIONS (AP) — The U.N. chief warned Thursday that the social and economic impact of COVID-19 “is enormous and growing” and said it’s foolish to believe a vaccine can undo damage from the global pandemic that will last for years or even decades.

Speaking to world leaders at the General Assembly’s first and mainly virtual special session on COVID-19, Secretary-General Antonio Guterres accused some countries he didn't name of ignoring or rejecting the World Health Organization’s recommendations at the start of the crisis early this year, resulting in nations going in their own directions and the virus spreading “in every direction.”

“Nearly a year into the pandemic, we face a human tragedy, and a public health, humanitarian and development emergency,” Guterres said.

The U.N. chief pointed to rising poverty, the looming threat of famine, and the prospect of “the biggest global recession in eight decades,” saying these impacts aren’t due to the coronavirus alone but are the result of long-term inequalities and injustices exposed by the pandemic that must be addressed.

General Assembly President Volkan Bozkir opened the two-day session, calling it a historic and overdue moment of reckoning to forge a path to end the pandemic that not only ensures people everywhere have access to vaccines but mobilizes financial resources for “an inclusive and resilient recovery.”

Nearly 80 world leaders, over 50 government ministers and 10 deputy leaders and ministers were scheduled to speak during the special session that began with Bozkir asking masked diplomats from the U.N.’s 193 member nations in the assembly hall to stand in silent tribute to the 1.5 million people who have lost their lives to COVID-19.

Bozkir called the session “a test for multilateralism” and said what the world must do is clear -- ensure fair and equitable access to vaccines, work together “to protect the most vulnerable countries,” provide adequate resources for an economic recovery that goes beyond pre-pandemic levels, and adopt policies that don't harm human rights or undermine democratic institutions.

Guterres has been urging the Group of 20 — the world’s richest nations — to back WHO’s cash-strapped ACT-Accelerator program to develop and distribute vaccines that includes Covax, an ambitious global project to buy and deliver virus vaccines for the world’s poorest people.

The secretary-general, clearly frustrated at the lack of a significant response, told world leaders there is a $28 billion financial gap, “including $4.3 billion urgently needed for the next two months.”

French President Emmanuel Macron said in a recorded speech that $10 billion has been raised for the ACT-Accelerator “but we must continue to raise funds from the entire international community.”

He reiterated the proposal he made at last month’s G20 summit for “a donation mechanism” that would ensure a portion of the first doses of vaccines that become available -- whether from Europe, China, Russia or the United States -- be used to vaccinate priority groups in developing countries.

German Chancellor Angela Merkel said additional funding for the ACT-Accelerator is needed and a worthwhile investment, pointing to progress on developing vaccines “which gives us reason for hope." Germany is also campaigning to strengthen WHO to better respond “to international health threats," she said.

European Union chief Charles Michel said a key lesson from the pandemic is that “we were caught unprepared” even though the number of pandemics has increased in recent decades.

He said the “monumental achievement” of developing vaccines in less than a year, rather than the 10 years generally needed, happened because of “unprecedented global cooperation and mobilization involving the scientific community and industry, to which the public authorities have provided the necessary support and funding.”

Looking ahead, Michel proposed that this mobilization and international solidarity be the basis of a new international treaty within the World Health Organization to deal with future pandemics. He said the aim should be to monitor the risks of emerging infectious diseases in animals for humans, ensure all people are alerted to health risks, improve access to health care, and address the needs for financing.

“The principle of universal access to the new COVID-19 vaccines is fundamental,” he said. “Our aim must be to guarantee access to vaccines, treatment and tests for future pandemics. This should be laid down in a treaty.”

Azerbaijan President Ilham Aliyev, speaking on behalf of the 120-member Nonaligned Movement, which initially called for the special session, noted that the pandemic “has exposed and aggravated vulnerabilities and inequalities in both developing and developed countries.”

Like many speakers, he stressed the importance of strengthening international cooperation and multilateralism.

“It is crucial that the vaccine or vaccines to address coronavirus be declared by the United Nations and by the World Health Organization as global public goods,” he said.

Foreign Minister Wang Yi of China, where COVID-19 was first identified, said vaccines “should be for global public good and accessible and affordable for developing countries."

“Defeating the pandemic requires concerted efforts from all countries," he said, stressing that major countries should lead in promoting collaboration “which is the right way forward."

Afghanistan President Ashraf Ghani, who said “the second wave of the pandemic is at our doorstep,” also called for a joint response by the world, saying that otherwise the inequalities between developed and developing nations will continue even as a vaccine becomes available.

“Our call for the vaccine to be a global public good must be loud and clear,” Ghani said, stressing that the role of multilateral organizations in distributing vaccines “will be critical.”

The Afghan leader said not everything about the pandemic is negative.

It “transformed the way we do business, the way we communicate, the way we live," Ghani said, and technological changes like tele-medicine and distance learning should be embraced.

Friday’s session will continue with speeches by leaders and ministers, but the focus will be on three virtual panels — the first on the U.N. response to the the coronavirus, the second on vaccines and the third on recovery from the pandemic.