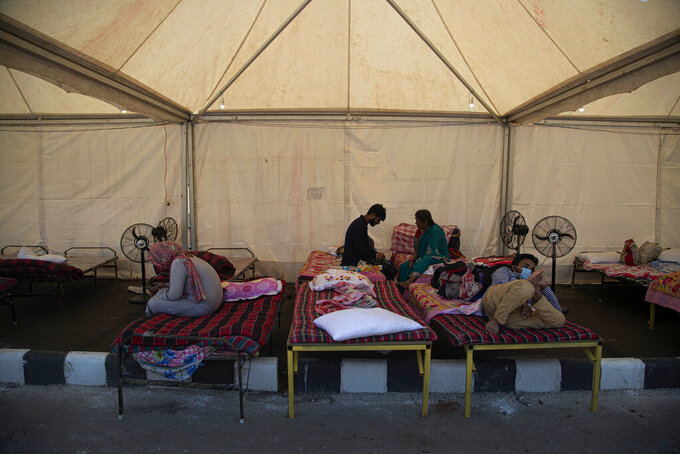 Migrant workers rest inside a tent before traveling in a Shramik train arranged to transport them to their home states, at a railway station in Gauhati, India, Thursday, May 28, 2020. Rural villages across India are seeing an increase in cases with the return of hundreds of thousands of migrant workers who left cities and towns where they were abandoned by their employers after having toiled for years building homes and roads. India sees no respite from the coronavirus caseload at a time when the two-month-old lockdown across the country is set to end on Sunday. (AP Photo/Anupam Nath)

UNITED NATIONS (AP) — The U.N. chief on Thursday warned the largest gathering of world leaders since the coronavirus pandemic began that it will cause “unimaginable devastation and suffering around the world,” with historic levels of hunger and famine and up to 1.6 billion people unable to earn a living unless action is taken now.

Secretary-General Antonio Guterres also told the high-level meeting on measures to help low- and middle-income countries that fallout from the crisis could lead to “a loss of $8.5 trillion in global output — the sharpest contraction since the Great Depression of the 1930s.”

Nearly 50 world leaders spoke by video at the event along with economic experts, including the heads of the International Monetary Fund and the World Bank. But there were noticeable absences, among them the leaders of the world’s two largest economies — the United States and China, which are engaged in escalating tensions over the pandemic and a host of other issues.

China’s U.N. Mission said it didn’t participate “due to a scheduling conflict” and submitted a written statement. The U.S. Mission did not respond to requests for a reason why it did not speak. Guterres told reporters later that neither country could participate at a high level, but “there is a commitment from both the United States and China to be involved in this process which we very much welcome.”

Canadian Prime Minister Justin Trudeau, a co-host of the event, said the U.N. wanted to bring dozens of global leaders and finance experts together because “we need to think outside the box” in dealing with pandemic.

“Europe is ready to put on the table expertise and resources, with both traditional and innovative financing instruments,” she said. “But ... it should be a green recovery, a digital recovery, a just and resilient recovery.”

Guterres said the “unprecedented human tragedy” behind the 5.5 million cases of COVID-19 and more than 350,000 deaths has been coupled with a devastating economic impact that has spurred his call since March for a relief package equivalent to more than 10% of the global economy.

“Developed countries have announced their own relief packages, because they can,” he said. “But we have not yet seen enough solidarity with developing countries to provide them with the massive and urgent support they need.”

South African President Cyril Ramaphosa, speaking on behalf of the African Union, called on developed countries to meet commitments and “be innovative.” He said developing country debts “are the foremost concern, especially to my continent, Africa,” which is calling for a debt standstill for two years and more IMF special drawing rights.

African leaders also support Gutteres' call for economic relief worth at least 10% of global GDP, which would mean over $200 billion in additional support for Africa.

Fiji’s prime minister, Voreqe Bainimarama, warned that the pandemic's economic impact is "widening the gap between the developing and developed worlds, between north and south.”

“As economies of small island states are left reeling, our tourism revenue is gutted, and our lending capacity is limited. We cannot go at it alone,” said Bainimarama, whose country relies on tourism for 40% of its economy.

Saying wealthy nations have already put $8 trillion into their own economies for pandemic relief, he added: “Even the equivalent of one-half of one percent of this was dedicated to all the world’s small island developing states, it would provide us with the vital support we need."