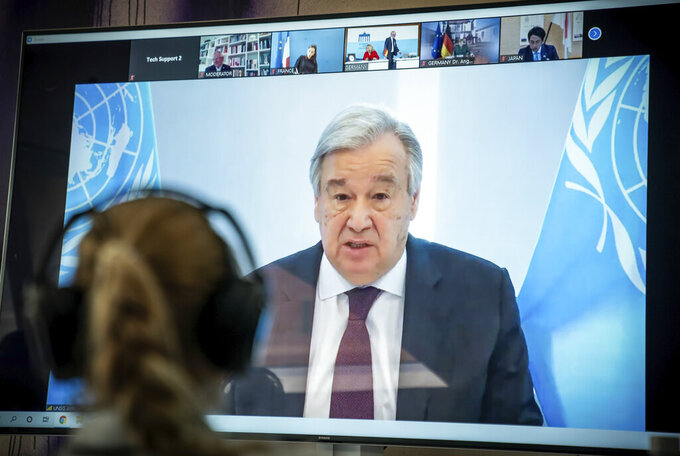 Antonio Guterres, UN Secretary-General displayed on a screen at the Environment Ministry as he delivers his speech at the Petersberg Climate Dialogue, in Berlin, Germany, Tuesday, April 28, 2020. Due to the coronavirus crisis, the conference will only be held digitally. (Michael Kappeler/Pool via AP)

UNITED NATIONS (AP) — Sixteen armed groups have responded positively to Secretary-General Antonio Guterres’ appeal for a global cease-fire to tackle the coronavirus pandemic, but the U.N. chief said Thursday that mistrust remains high and turning intentions into an end to hostilities is difficult.

He said at a news conference that his March 23 call “has resonated widely, with endorsements from 114 governments, diverse regional organizations, religious leaders and more than 200 civil society groups spanning all regions.”

According to an informal tally kept by the U.N. based on various sources, the 16 armed groups that responded positively are from Yemen, Myanmar, Ukraine, Philippines, Colombia, Angola, Libya, Senegal, Sudan, Syria, Indonesia and Nagorno-Karabakh.

Guterres said his special representatives and envoys are working, with his own involvement when necessary, “to turn expressed intentions into effective cease-fires.”

The secretary-general said he believes “there is an opportunity for peace in Yemen.” He said a cease-fire negotiated by Turkey and Russia in Syria’s northwest Idlib region, the last major opposition stronghold, is holding “but we are still hopeful for a country-wide end to hostilities.”

In Afghanistan, Guterres said, “we are pushing hard for a humanitarian cease-fire between the government and the Taliban.” But “in Libya, regrettably, we have seen an escalation despite all our efforts and those of many others in the international community,” he said.

Guterres stressed that all of the U.N.’s efforts “depend on strong political backing,” and he singled out divisions in the Security Council among its five veto-wielding members as an obstacle.

Diplomats say a draft Security Council resolution voicing support for the secretary-general's cease-fire call is being held up by a dispute between the United States and China over a reference to the World Health Organization. If adopted, it would be the council's first resolution related to the pandemic.

The Chinese insist the text mention the WHO and its role in the global fight against the virus. That is opposed by the U.S., where President Donald Trump suspended funding for the U.N. agency in early April, accusing it of failing to stop the virus from spreading and saying it “must be held accountable.” Washington is insisting instead on a reference to “transparency” in information about the virus, diplomats said, speaking on condition of anonymity because discussions have been private.

Guterres told reporters, “It is my hope the Security Council will be able to find unity and adopt decisions that can help to make cease-fires meaningful and real."

According to the U.N.’s informal tally, the groups that have responded positively to Guterres’ cease-fire appeal include Houthi rebels who control Yemen’s capital of Sanaa and the country’s separatist Southern Transitional Council; Myanmar’s Arakan Army and Brotherhood Alliance; the Communist Party of the Philippines and its rebel New People’s Army; Colombia’s National Liberation Army; and Angola’s separatist Front for the Liberation of the Enclave of Cabinda.

The others are the rebel Libyan National Army; Senegal’s Movement of the Democratic Forces of Casamance; the Sudan Liberation Army/Abdul Wahid, the Sudan People’s Liberation Movement-North (Al-Hilu) and the Sudan Revolutionary Front; the Syrian Opposition Coalition; Indonesia’s West Papua National Liberation Army; de facto “authorities” in disputed Nagorno-Karabakh; and entities in control of certain areas of the Donetsk and Luhansk regions of Ukraine.