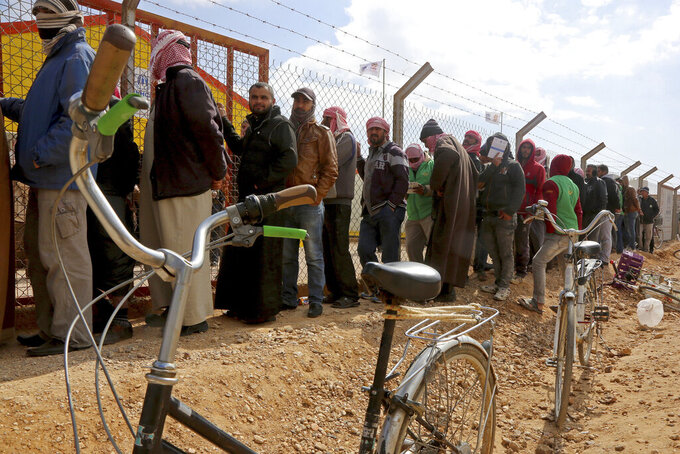 FILE - In this Feb. 18, 2018 file photo, Syrian refugees line up to register their names at an employment office, at the Azraq Refugee Camp, 100 kilometers (62 miles) east of Amman, Jordan. The U.N. agency for refugees said Tuesday, Sept. 8, 2020, that it has confirmed two coronavirus cases in the Azraq camp. They are the first infections to be detected among Syrians living in refugee camps in Jordan, which are home to more than 100,000 Syrians displaced by that country's civil war. (AP Photo/Raad Adayleh, File)

AMMAN, Jordan (AP) — The U.N. refugee agency said Tuesday it has confirmed two coronavirus cases in the Azraq camp for Syrian refugees in Jordan, which is home to more than 40,000 people who have fled their country's civil war.

They are the first infections to be detected among Syrians living in refugee camps in Jordan. The UNHCR said the two patients were transferred to quarantine facilities after testing positive late Monday, and their neighbors have been isolated as more testing is carried out.

More than 5.5 million Syrians have fled the country since the war broke out in 2011, with most settling in neighboring countries where they often live in close quarters and struggle to make ends meet. Coronavirus lockdowns have taken a heavy toll on the region's economies, making it even harder for refugees to find work.

“This is the first confirmed case of coronavirus in refugee camps in Jordan,” the UNHCR said in a statement. “It is a reminder that everyone has been affected by this epidemic, and solutions must be addressed through international solidarity and cooperation.”

UNHCR spokesman Mohammad Hawari said the two patients were transferred to an isolation center on the Dead Sea. Those who were living with them, as well as their neighbors, were moved to an "isolation zone" inside the camp, and everyone who had contact with them is being tested, he said.

He added that the camp hospital has 14 beds designated for patients with COVID-19, the disease caused by the virus. But he said officials are concerned the virus could easily spread among the crowded population.

Experts and aid agencies have warned of potentially catastrophic outbreaks in the world's refugee camps, where sanitation is often poor and social distancing is nearly impossible. Over 70 million people worldwide have fled their homes because of war and unrest, and up to 10 million live in refugee camps and informal settlements.