At UN, island nation of Palau speaks to interconnected world 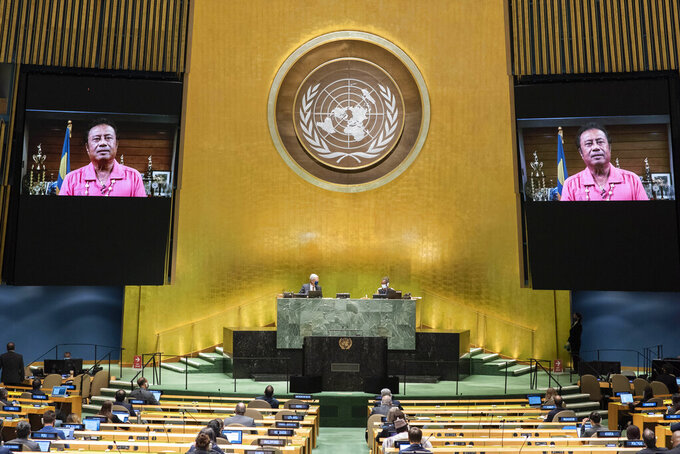 In this photo provided by the United Nations, the pre-recorded message of Tommy Esang Remengesau Jr., President of Palau, is played during the 75th session of the United Nations General Assembly, Wednesday Sept. 23, 2020, at U.N. headquarters, in New York. (Eskinder Debebe/UN Photo via AP)

UNITED NATIONS (AP) — As one of the smallest countries on earth, the Pacific island nation of Palau doesn't always get to command the world's attention.

But every nation gets to take the world stage at the U.N. General Assembly's premier annual meeting, and Palau President Tommy E. Remengesau Jr. used his turn Wednesday to illuminate the toll of the coronavirus pandemic, even for a country without any cases of COVID-19. He also pressed environmental issues and made the point that no nation is an island unto itself in the international system, especially during a pandemic.

While Palau has been free of the virus, “we are certainly not free of the consequences of this pandemic,” Remengesau said by video at a global gathering gone virtual because of the scourge. He said it had inflicted “a level of isolation we have not known for many, many years.”

Palau has been struggling to keep food and medicine flowing in, to provide some medical treatment for which residents usually travel to larger countries, and to contend with private-sector unemployment now approaching 50%, the president said.

The country needs financial support and equitable access to potential vaccines, he stressed: “In a global community, parts of the world cannot be made safe in isolation.”

Palau is a biodiversity hotspot about 600 miles (970 kilometers) miles east of the Philippines, with 20,000 people scattered across a 250-island tropical archipelago. It was administered by the United States for half a century before gaining independence in 1994. A compact with the U.S. governs economic and other relations, and U.S. Defense Secretary Mark Esper visited Palau last month in a first for any American defense chief and a reflection of U.S.-Chinese competition for influence in the Pacific.

Palau, like the U.S., is one of only 15 states with official diplomatic relations with Taiwan, the self-governing island that China claims as its own territory. Remengesau argued that tensions that have kept Taiwan from participating in the World Health Assembly in recent years have “made the world less safe,” as Taiwan has won praise for its handling of the virus.

In a year when the coronavirus is absorbing much of the world's attention, Remengesau implored leaders not to lose sight of another priority: “repairing our relationship with nature” by tackling ocean pollution, overfishing, climate change and loss of biodiversity.

Palau has banned many types of sunscreen in an effort to protect coral reefs. Marine scientists have said some chemicals can be toxic to such reefs, although some critics question whether there's been enough research to support prohibiting the products.

Palau also recently made almost all its coastal waters a marine sanctuary, where no fishing or mining is allowed. Remengesau said he hoped that move “will inspire ambition elsewhere.”

“We are all ocean people” on a planet where the seas provide food, help regulate the climate and serve as trade routes and natural defenses, noted Remengesau, who wore a shell necklace as he spoke.

After serving 16 of the last 20 years as Palau’s president, he plans to further his own bond with the ocean when his current term is up in January.

“I will return to being a fisherman in Palau’s pristine waters,” he said.

New York-based Associated Press journalist Jennifer Peltz has covered the United Nations since 2017. Follow her on Twitter at http://twitter.com/jennpeltz