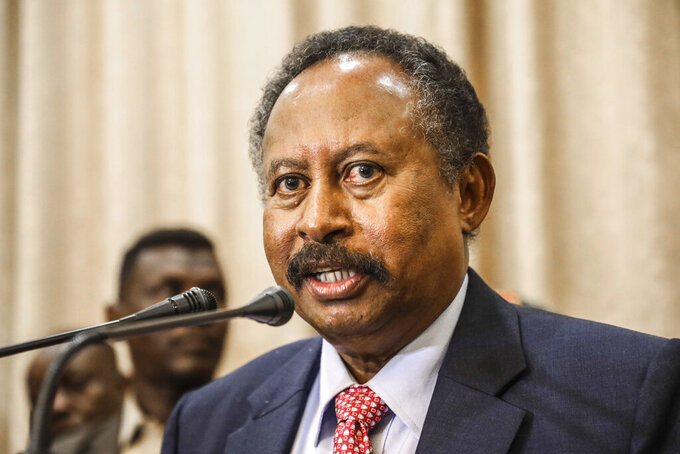 FILE - In this Aug. 21, 2019, file photo, Sudan's Prime Minister Abdalla Hamdok speaks at a news conference in Khartoum, Sudan. A statement from Hamdok’s office says deadly tribal clashes between Arabs and non-Arabs in the country's South Darfur province that erupted on Tuesday, May 5, 2020, and continued into Wednesday have since subsided. (AP Photo, File)

But the council did not set a date for the end of the mission, known as UNAMID, in the two related resolutions that were approved in writing Wednesday night under new rules initiated because of the COVID-19 pandemic and formally adopted at a Security Council meeting Thursday morning.

The resolution, adopted by a vote of 15-0 extends the current 6,500-strong mission for six months until Dec. 31, 2020. It says the council will decide by then on “the responsible draw-down and exit of UNAMID,” taking into account a special report from U.N. Secretary-General Antonio Guterres and the chair of the African Union Commission.

That report, which is due by Oct. 31, should assess the situation on the ground and include the impact of Sudan’s peace process on the security situation in Darfur and the capacity of the Sudanese government to protect civilians, which is UNAMID’s primary mandate, the resolution says.

The other resolution, also adopted by a 15-0 vote, establishes a new political mission, the United Nations Integrated Transition Assistance Mission in Sudan to be known as UNITAMS, for an initial period of one year. It has a mandate to assist the country in its political transition toward democratic governance and in protecting and promoting human rights and sustainable peace.

It says UNITAMS should also assist the government in “peace-building, civilian protection and rule of law, in particular in Darfur,” provide technical assistance in drafting a constitution, and support peace negotiations and implementation of any peace agreements if asked.

The Security Council asked Guterres to swiftly establish UNITAMS, with a view to reaching its full operational capacity as soon as possible so it can start delivering on its mandates no later than Jan. 1, 2021.

The Darfur conflict began in 2003 when ethnic Africans rebelled, accusing the Arab-dominated Sudanese government of discrimination. The government in Khartoum was accused of retaliating by arming local nomadic Arab tribes and unleashing them on civilian populations — a charge it denies.

In recent years, as the result of a successful government military campaign, the rebellion has been reduced to a rebel Sudan Liberation Army faction headed by Abdul Wahid Elnur in Jebel Marra.

In July 2018, the Security Council voted to dramatically cut the UNAMID force in response to reduced fighting and improved security conditions. The target then was to end the mission on June 30, 2020.

The Darfur conflict took place under the three-decade autocratic rule of former president Omar al-Bashir, during which Sudan was convulsed by a bloody civil war and rebellions, not only in Darfur but in Blue Nile and South Kordofan states. Al-Bashir’s rule ended in April 2019 when the military ousted him after mass street protests by a pro-democracy movement which began in late 2018.

A power-sharing agreement signed in August 2019 between the military and protesters created a joint civilian-military ruling “sovereign council,” but the civilians are struggling to assert authority in the face of the military’s power.

In October 2019, the Security Council voted unanimously to keep UNAMID in Darfur for another year in hopes the new civilian-led transitional government can restore peace.

It faces towering challenges, including the dire economic conditions that fueled the protests. Sudan’s economy has been battered by civil wars and international sanctions. Prime Minister Abdalla Hamdok has said achieving peace with armed groups is also crucial for the government as it would allow a reduction in military spending, which takes up to 80% of the budget.

The UNAMID resolution recognizes improvements in security conditions, “while expressing concern that the security situation in some regions of Darfur remains precarious.” It underscores the need to protect peace-building gains in Darfur and “avoid a relapse into conflict.”

The UNAMID force was established in 2007, the first joint U.N.-AU peacekeeping operation. UNITAMS is a U.N.-only political mission but the resolution underlines “the importance of the partnership between the United Nations and the African Union in Sudan.”

The UNAMID resolution recognizes the impact of the pandemic on its draw-down, and the UNITAMS resolution expresses “grave concern” at its impact on Sudan's health system, and socioeconomic and humanitarian situation.